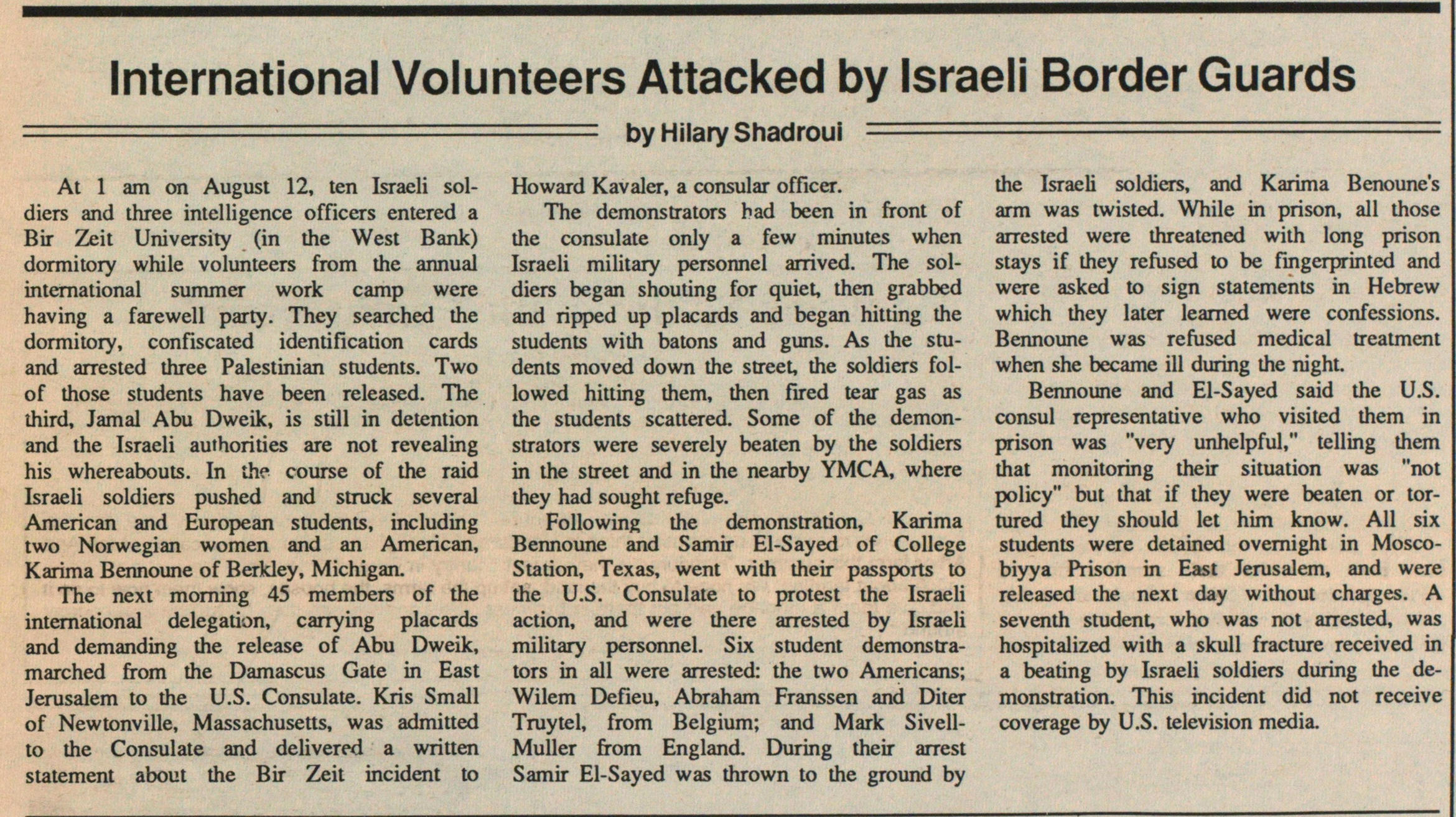 At 1 am on August 12, ten Israeli soldiers and three intelligence officers entered a Bir Zeit University (in the West Bank) dormitory while volunteers from the annual international summer work camp were having a farewell party. They searched the dormitory, confiscated identification cards and arrested three Palestinian students. Two of those students have been released. The third, Jamal Abu Dweik, is still in detention and the Israeli authorities are not revealing his whereabouts. In the course of the raid Israeli soldicrs pushed and struck severa] American and European students, including two Norwegian women and an American, Karima Bennoune of Berkley, Michigan. The next moming 45 members of the international delegation, carrying placards and demanding the release of Abu Dweik, marched from the Damascus Gate in East Jerusalem to the U.S. Consulate. Kris Small of Newtonville, Massachusetts, was admitted to the Consulate and delivered a written statement about the Bir Zeit incident to Howard Kavaler, a consular officer. The demons trators bad been in front of the consulate only a few minutes when Israeli military personnel arrived. The soldiers began shouting for quiet, then grabbed and ripped up placareis and began hitting the students with batons and guns. As the students moved down the street, the soldiers followed hitling them, then fired tear gas as the students scattered. Some of the demonstrators were severely beaten by the soldiers in the street and in the nearby YMCA, where they had sought refuge. Following the demonstration, Karima Bennoune and Samir El-Sayed of College Station, Texas, went with their passports to the U.S. Consulate to protest the Israeli action, and were there arrested by Israeli military personnel. Six student demonstrators in all were arrested: the two Americans; Wilem Defieu, Abraham Franssen and Diter Truytel, from Belgium; and Mark SivellMuller from England. During their arrest Samir El-Sayed was thrown to the ground by the Israeli soklicrs, and Karima Benoune's arm was twisted. While in prison, all those arrcsted were threatened with long prison stays if they refused to be fingerprinted and were asked to sign statements in Hebrew which they later leamed were confessions. Bennoune was refused medical treatment when she became ill during the night. Bennoune and El-Sayed said the U.S. consul representative who visited them in prison was "very unhelpful," telling them that monitoririg their situation was "not policy" but that if they were beaten or tortured they should let him know. All six students were detained overnight in Moscobiyya Prison in East Jerusalem, and were released the next day without charges. A seventh student, who was not arrested, was hospitalized wilh a skull fracture received in a beating by Israeli soldiers during the demonstration. This incident did not receive coverage by U.S. televisión media.