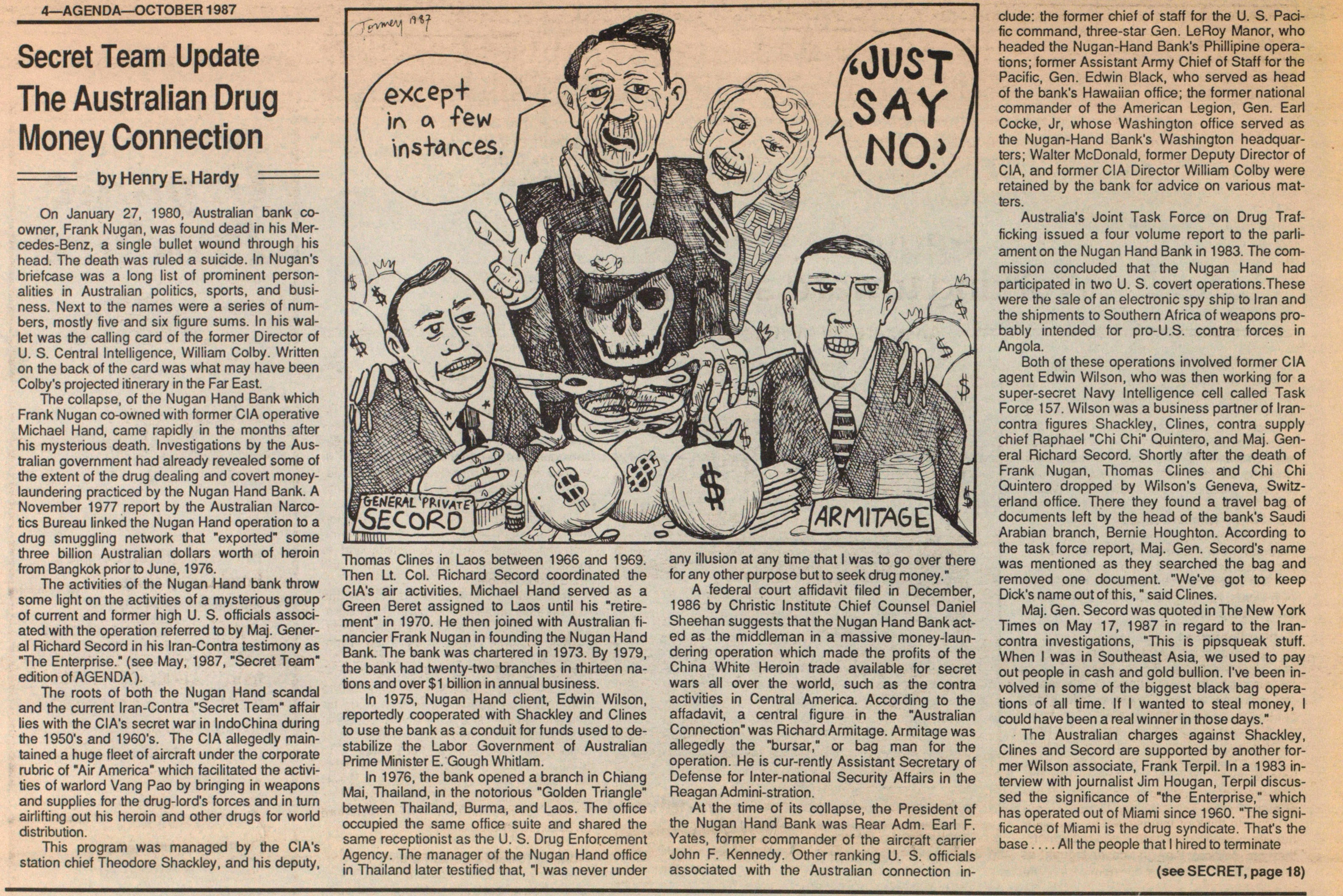 On January 27, 1980, Australian bank co-owner, Frank Nugan, was found dead in his Mercedes-Benz, a single bullet wound through his head. The death was ruled a suicide. In Nugan's briefcase was a long list of prominent personalities in Australian politics, sports, and business. Next to the names were a series of numbers, mostly five and six figure sums. In his wallet was the calling card of the former Director of US Central Intelligence, William Colby. Written on the back of the card was what may have been Colby's projected itinerary in the in the Far East.

The collapse of the Nugan Hand Bank which Frank Nugan co-owned with former CIA operative Michael Hand, came rapidly in the months after his mysterious death. Investigations by the Australian government had already revealed some of the extent of the drug dealing and covert money-laundering practiced by the Nugan Hand Bank. A November 1977 report by the Australian Narcotics Bureau linked the Dugan Hand operation to a drug smuggling network that "exported" some three billion Australian dollars worth of heroin from Bangkok prior to June, 1976.

The activities to the Nugan Hand Bank throw some light on the activities of a mysterious group of current and former high US officials associated with the operation referred to by Maj. General Richard Second in his Iran-Contra testimony as "The Enterprise." (see May, 1987, "Secret Team" edition of AGENDA).

The roots of both the Nugan Hand scandal and the current Iran-Contra "Secret Team" affair lies with the CIA's secret war in IndoChina during the 1950's and 1960's. The CIA allegedly maintained a huge fleet of aircraft under the corporate rubric of "Air America" which facilitated the activities of warlord Vang Pao by bringing in weapons and supplies for the drug-lord's forces and in turn airlifting out his heroin and other drugs for world distribution.

This program was managed by the CIA's station chief Theodore Shackley, and his deputy, Thomas Clines in Laos between 1966 and 1969. Then Lt. Col. Richard Secord coordinated the CIA's air activities. Michael Hand served as a Green Beret assigned to Laos until his "retirement" in 1970. He then joined with Australian financier Frank Nugan in founding the Nugan Hand Bank. The bank was chartered in 1973. By 1979, the bank had twenty-two branches in thirteen nations and over $1 billion in annual business.

In 1975, Nugan Hand client, Edwin Wilson, reportedly cooperated with Shackley and Clines to use the bank as a conduit for funds used to destabilize the Labor Government of Australian Prime Minister E. Gough Whitlam.

In 1976, the bank opened a branch in Chiang Mai, Thailand, in the notorious "Golden Triangle" between Thailand, Burma, and Laos. The office occupied the same office suite and shared the same receptionist as the US Drug Enforcement Agency. The manager of the Nugan Hand Office in Thailand later testified that, "I was never under any illusion at any time that I was to go over there for any other purpose but to seek drug money."

A federal court affidavit filed in December, 1986 by Christic Institute Chief Counsel Daniel Sheehan suggests that the Nugan Hand Bank acted as the middleman in a massive money-laundering operation which made the profits of the China White Heroin trade available for secret wars all over the world, such as the contra activities in Central America. According to the affidavit, a central figure in the "Australian Connection" was Richard Armitage. Armitage was allegedly the "bursar," or bag man for the operation. He is currently Assistant Secretary of Defense for International Security Affairs in the Reagan Administration.

At the time of its collapse, the President of the Nugan Hand Bank was Rear Adm. Earl F. Yates, former commander of the aircraft carrier John F. Kennedy. Other ranking US officials associated with the Australian connection include: the former chief of staff for the US Pacific command, three-star Gen. LeRoy Manor, who headed the Nugan-Hand Bank's Philippine operations; former Assistant Army Chief of Staff for the Pacific, Gen. Edwin Black, who served as head of the bank's Hawaiian office; the former national commander of the American Legion, Gen. Earl Cocke, Jr, whose Washington office served as the Nugan-Hand Bank's Washington headquarters; Walter McDonald, former Deputy Director of CIA, and former CIA Director William Colby were retained by the bank for advice on various matters.

Australia's Joint Task Force on Drug Trafficking issued a four volume report to the parliament on the Nugan Hand Bank in 1983. The commission concluded that the Nugan Hand had participated in two US cover operations. These were the sale of an electronic spy ship to Iran and the shipments to Southern Africa of weapons probably intended for pro-US contra forces in Angola.

Both of these operations involved former CIA agent Edwin Wilson, who was then working for a super-secret Navy Intelligence cell called Task Force 157. Wilson was a business partner of Iran-contra figures Shackley, Clines, contra supply chief Raphael "Chi Chi" Quintero dropped by Wilson's Geneva, Switzerland office. There they found a travel bag of documents left by the head of the bank's Saudi Arabian branch, Bernie Houghton. According to the task force report, Maj. Gen. Secord's name was mentioned as they searched the bag and removed one document. "We've got to keep Dick's name out of this," said Clines.

Maj. Gen. Secord was quoted in The New York Times on May 17, 1987 in regard to the Iran-contra investigations, "This is pipsqueak stuff. When I was in Southeast Asia, we used to pay out people in cash and gold bullion. I've been involved in some of the biggest black bag operations of all time. If I wanted to steal money, I could have been a real winner in those days."

The Australian charges against Shackley, Clines and Secord are supported by another former Wilson associate, Frank Terpil. In a 1983 interview with journalist Jim Hougan, Terpil discussed the significance of "the Enterprise," which has operated out of Miami since 1960. "The significance of Miami is the drug syndicate. That's the base...all the people that I hired to terminate.

The Australian charges against Shackley, Clines and Secord are supported by another former Wilson associate, Frank Terpil. In a 1983 interview with journalist Jam Hougan, Terpil discussed the significance of "the Enterprise," which has operated out of Miami since 1960. "The significance of Miami is the drug syndicate. That's the base...all the people that I hired to terminate other people, from the Agency, are there. They get involved in this biggest drug scandal going, which is whitewashed. Who is the guy behind the scandal? Clines. Who's the boss of Clines? Shackley. Where of they come from? Laos. Where did the money come from? Nugan Hand. The whole goddamned thing has been moved down there...Before that, in Asia, the pilot on the plane was Dick Secord, a Captain in the Air Force. What was on the plane? Gold! Ten million bucks at a time, in gold. H was going to the Golden Triangle to pay off the warlords, the drug lords. Now what do you do with all of the opium? You reinvest it in your own operations. Where? Thailand. You pay it to Alice Springs (top secret US Intelligence facility in Australia.) Billions of dollars - not millions - billions of dollars."

No one has ever been convicted of a crime for the various illegal activities of the Nugan Hand bank. Frank Nugan's Green Beret partner, Michael Hand, disappeared in June of 1980. Bernie Houghton dropped from sight at about the same time. Edwin Wilson is serving a 54 year prison term in the United States for illegal weapons smuggling. Frank Terpil is a fugitive from a 53 year sentence in the Wilson case. His whereabouts remain unknown. Shackley and Clines, although forced to resign from the CIA in 1979, have never faced criminal charges. General Secord remains at liberty to brag about his war exploits, and Richard Armitage remains U.S. Assistant Secretary of Defense.