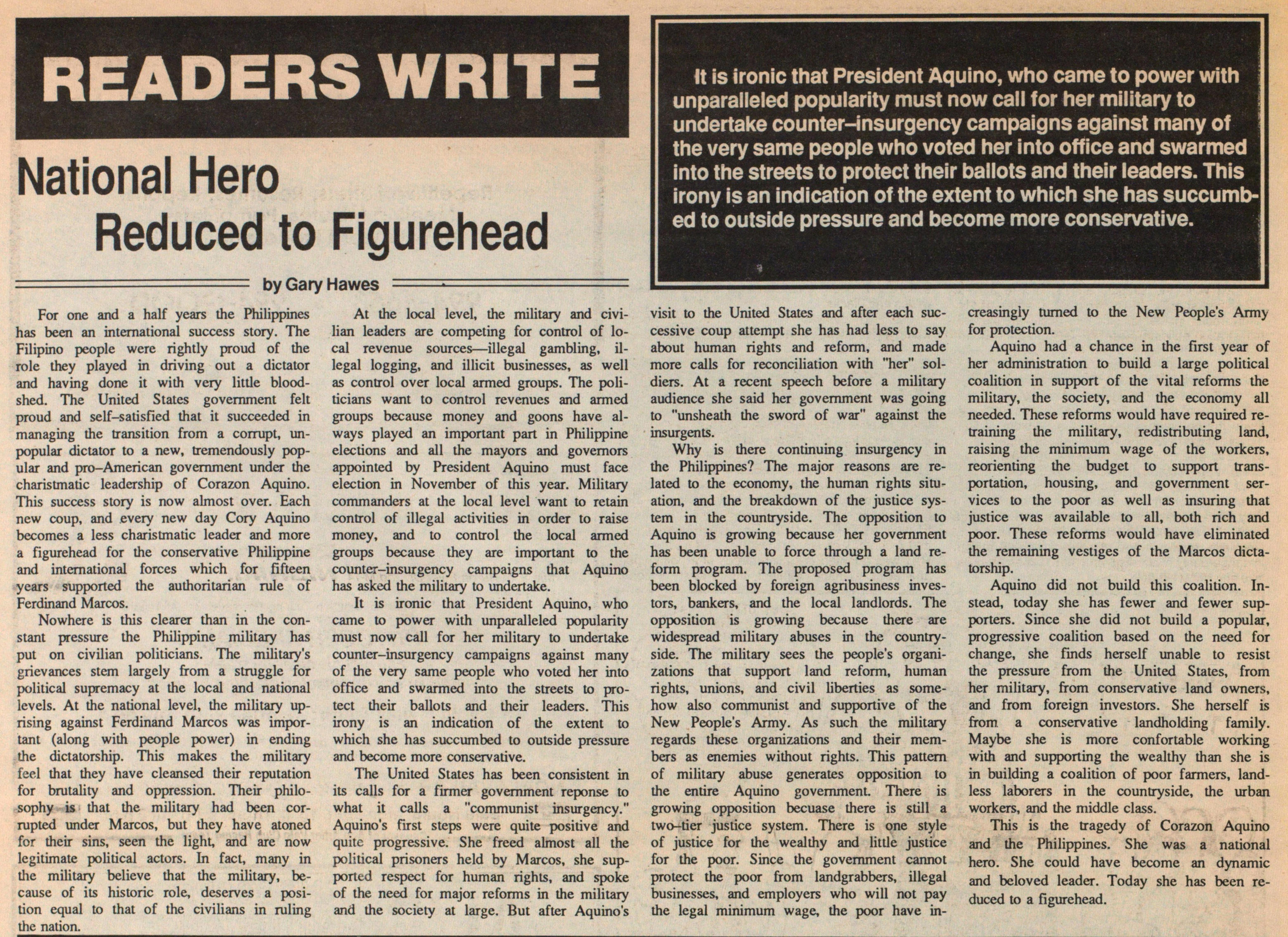 For one and a half years the Philippines has been an international success story. The Filipino people were rightly proud of the role they played in driving out a dictator and having done it with very litüe bloodshed. The United States government feit proud and self-satisfied that it succeeded in managing the transition from a corrupt, impopular dictator to a new, tremendously popular and pro-American govemment under the charistmatic leadership of Corazón Aquino. This success story is now almost over. Each new coup, and every new day Cory Aquino becomes a less charistmatic leader and more a figurehead for the conservative Philippine and international forces which for fifteen years supported the authoritarian rule of Ferdinand Marcos. Nowhere is this clearer than in the constant pressure the Philippine military has put on civilian politicians. The military's grievances stem largely from a struggle for political supremacy at the local and national levéis. At the national level, the military uprising against Ferdinand Marcos was important (along with people power) in ending the dictatorship. This makes the military feel that they have cleansed their reputation for brutality and oppression. Their philosophy is that the military had been corrupted under Marcos, but they have atoned for their sins, seen the light, and are now legitímate political actors. In fact, many in the military believe that the military, because of its historie role, deserves a position equal to that of the civilians in ruling the nation. At the local level, the military and civilian leaders are competing for control of local revenue sources - illegal gambling, illegal logging, and illicit businesses, as well as control over local armed groups. The politicians want to control revenues and armed groups because money and goons have always played an important part in Philippine elections and all the mayors and govemors appointed by President Aquino must face election in November of this year. Military commanders at the local level want to retain control of illegal activities in order to raise money, and to control the local armed groups because they are important to the counter-insurgency campaigns that Aquino has asked the military to undertake. It is ironie that President Aquino, who came to power with unparalleled popularity must now cali for her military to undertake counter-insurgency campaigns against many of the very same people who voted her into office and swarmed into the streets to protect their ballots and their leaders. This irony is an indication of the extent to which she has succumbed to outside pressure and become more conservative. The United States has been consistent in its calis for a firmer govemment reponse to what it calis a "communist insurgency." Aquino's first steps were quite positive and quite progressive. She freed almost all the polilical prisoners held by Marcos, she supported respect for human rights, and spoke of the need for major reforms in the military and the society at large. But after Aquino's visit to the United States and after each successive coup attempt she has had less to say about human rights and reform, and made more calis for reconciliation with "her" soldiers. At a recent speech before a military audience she said her govemment was going to "unsheath the sword of war" against the insurgen ts. Why is there continuing insurgency in the Philippines? The major reasons are related to the economy, the human rights situation, and the breakdown of the justice system in the countryside. The opposition to Aquino is growing because her govemment has been unable to forcé through a land reform program. The proposed program has been blockcd by foreign agribusiness investors, bankers, and the local landlords. The opposition is growing because there are widespread military abuses in the countryside. The military sees the people's organizations that support land reform, human rights, unions, and civil liberties as somehow also communist and supportive of the New People's Army. As such the military regards these organizations and their members as enemies without rights. This pattern of military abuse generates opposition to the entire Aquino govemment. There is growing opposition becuase there is still a two-tier justice system. There is one style of justice for the wealthy and little justice for the poor. Since the govemment cannot protect the poor from landgrabbers, illegal businesses, and employers who will not pay the legal minimum wage, the poor have creasingíy tumed to the New People's Army for protectíon. Aquino had a chance in the fíist year of her administration to build a large political coalition in support of the vital reforms the military, the society, and the economy all needed. These reforms would have required retraining the military, redistributing land, raising the minimum wage of the workers, reorienting the budget to support transportation, housing, and government services to the poor as well as insuring that justice was available to all, both rich and poor. These reforms would have eliminated the remaining vestiges of the Marcos dictatorship. Aquino did not build this coalition. Instead, today she has fewer and fewer supporters. Since she did not build a popular, progressive coalition based on the need for change, she fïnds herself unable to resist the pressure from the United States, f rom her military, from conservative land owners, and from foreign investors. She herself is from a conservative landholding family. Maybe she is more confortable working with and supporting the wealthy than she is in building a coalition of poor farmers, landless laborers in the countryside, the urban workers, and the middle class. This is the tragedy of Corazón Aquino and the Philippines. She was a national hero. She could have become an dynamic and beloved leader. Today she has been reduced to a fïgurehead.