Rent Stabilization In A Nutshell 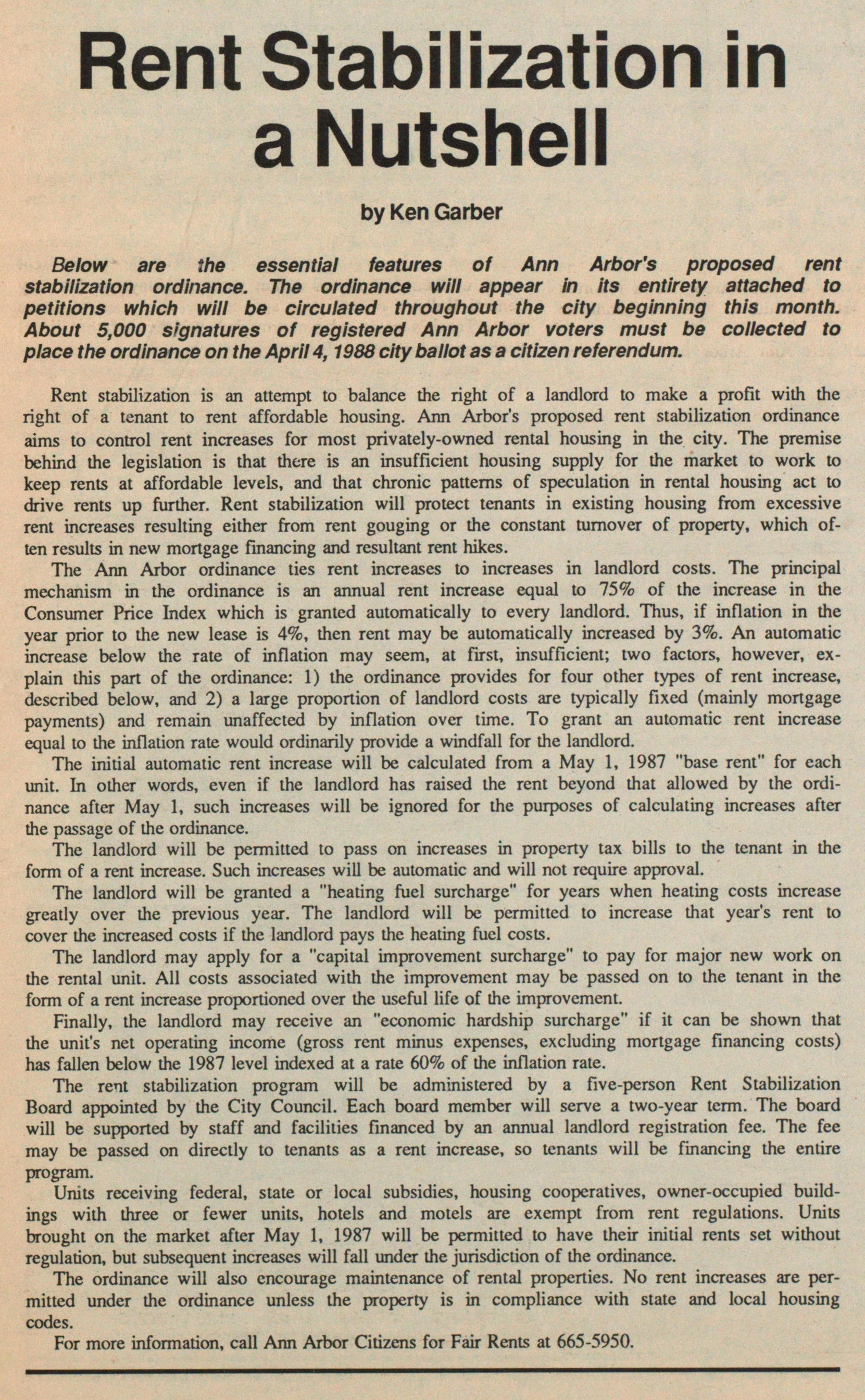 Below are the essential features of Ann Arbor's proposed rent stabilization ordinance. The ordinance will appear in its entirety attached to petitions which will be circulated throughout the city beginning this month. About 5,000 signatures of registered Ann Arbor voters must be collected to place the ordinance on the April 4, 1988 city ballot as a citizen referendum. Rent stabilization is an attempt to balance the right of a landlord to make a profit with the right of a tenant to rent affordable housing. Ann Arbor's proposed rent stabilization ordinance aims to control rent increases for most privately-owned rental housing in the city. The premise behind the legislation is that there is an insuffïcient housing supply for the market to work to keep rents at affordable levéis, and that chronic pattems of speculation in rental housing act to drive rents up further. Rent stabilization will protect tenants in existing housing from excessive rent increases resulting either from rent gouging or the constant tumover of property, which often results in new mortgage financing and resultant rent hikes. The Ann Arbor ordinance ties rent increases to increases in landlord costs. The principal mechanism in the ordinance is an annual rent increase equal to 75% of the increase in the Consumer Price Index which is granted automatically to every landlord. Thus, if inflation in the year prior to the new lease is 4%, then rent may be automatically increased by 3%. An automatic increase below the rate of inflation may seem, at first, insufficient; two factors, however, explain this part of the ordinance: 1) the ordinance provides for four other types of rent increase, described below, and 2) a large proportion of landlord costs are typically fixed (mainly mortgage payments) and remain unaffccted by inflation over time. To grant an automatic rent increase equal to the inflation rate would ordinarily provide a windfall for the landlord. The initial automatic rent increase will be calculated from a May 1, 1987 "base rent" for each unit. In other words, even if the landlord has raised the rent beyond that allowed by the ordinance after May 1, such increases will be ignored for the purposes of calculating increases after the passage of the ordinance. The landlord will be permitted to pass on increases in property tax bilis to the tenant in the form of a rent increase. Such increases will be automatic and will not require approval. The landlord will be granted a "hearing fuel surcharge" for years when heating costs increase greatly over the previous year. The landlord will be permitted to increase that ycar's rent to cover the increased costs if the landlord pays the heating fuel costs. The landlord may apply for a "capital improvement surcharge" to pay for major new work on the rental unit. All costs associated with the improvement may be passcd on to the tenant in the form of a rent increase proportioned over the useful life of the improvement. Finally, the landlord may receive an "economie hardship surcharge" if it can be shown that the unit's net operating income (gross rent minus expenses, excluding mortgage financing costs) has fallen below the 1987 level indexed at a rate 60% of the inflation rate. The rent stabilization program will be administered by a five-person Rent Stabilization Board appointed by the City Council. Each board member will serve a two-year term. The board will be supported by staff and facilities financed by an annual landlord registraüon fee. The fee may be passed on directly to tenants as a rent increase, so tenants will be financing the enüre program. Units receiving federal, state or local subsidies, housing cooperativos, owner-occupied buildings with three or fewer units, hotels and motels are exempt from rent regulations. Units brought on the market after May 1, 1987 will be permitted to have their initial rents set without regulation, but subsequent increases will fall under the jurisdiction of the ordinance. The ordinance will also encourage maintenance of rental properties. No rent increases are permitted under the ordinance unless the property is in compliance with state and local housing codes. For more information, cali Ann Arbor Citizens for Fair Rents at 665-5950.