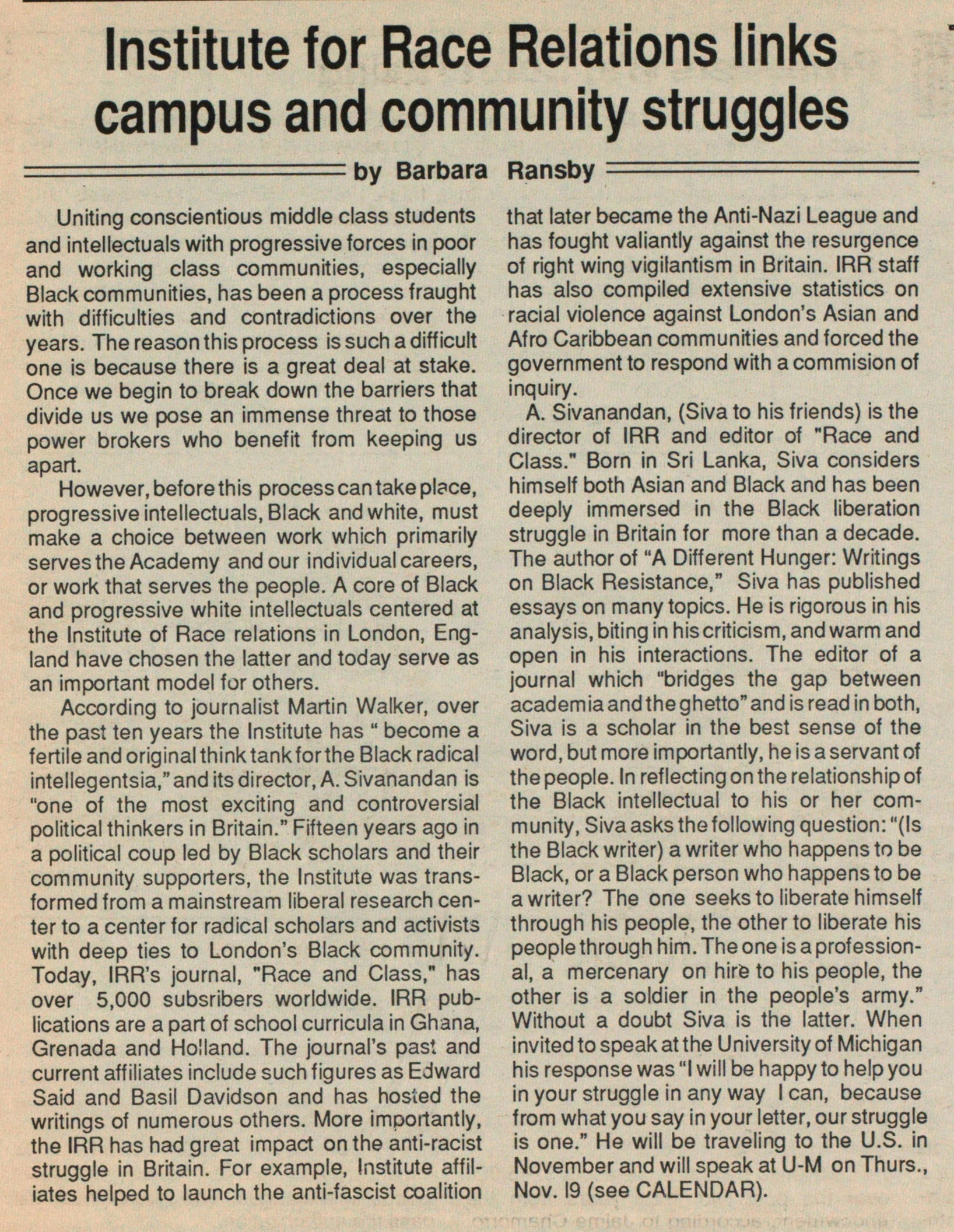 Uniting conscientious middle class students and intellectuals with progressive torces in poor and working class communities, especially Black communities, has been a process fraught with ditficulties and contradictions over the years. The reasonthis process issuchadifticult one is because there is a great deal at stake. Once we begin to break down the barriers that divide us we pose an immense threat to those power brokers who benefit from keeping us apart. However, before this process can take place, progressive intellectuals, Black and white, must make a choice between work which primarily serves the Academy andour individual careers, or work that serves the people. A core of Black and progressive white ntellectuals centered at the Institute of Race relations in London, England have chosen the latter and today serve as an important model for others. According to journalist Martin Walker, over the past ten years the Institute has " become a fertile and original thinktankforthe Black radical intellegentsia," and its director, A. Sivanandan is "one of the most exciting and controversial political thinkers in Britain." Fifteen years ago in a political coup led by Black scholars and their community supporters, the Institute was transformed from a mainstream liberal research center to a center for radical scholars and activists with deep ties to London's Black community. Today, IRR's journal, "Race and Class," has over 5,000 subsribers worldwide. IRR publications are a part of school curricula in Ghana, Grenada and Holland. The journal's past and current affiliates include such figures as Edward Said and Basil Davidson and has hosíed the writings of numerous others. More importantly, the IRR has had great impact on the anti-racist struggle in Britain. For example, Institute affiliates helped to launch the anti-fascist coalition that later became the Anti-Nazi League and has fought valiantly against the resurgence of right wing vigilantism in Britain. IRR staff has also compiled extensive statistics on racial violence against London's Asian and Afro Caribbean communities and forced the government to respond with a commision of inquiry. A. Sivanandan, (Siva to nis friends) is the director of IRR and editor of "Race and Class." Born in Sri Lanka, Siva considers himself both Asian and Black and has been deeply immersed in the Black liberation struggle in Britain for more than a decade. The author of "A Different Hunger: Writings on Black Resistance," Siva has published essays on many topics. He is rigorous in his analysis, biting in hiscriticism, and warm and open in his interactions. The editor of a Journal which "bridges the gap between academiaand the ghetto" and is read in both, Siva is a scholar in the best sense of the word, but more importantly, he s a servant of the people. In ref lecting on the relationship of the Black ntellectual to his or her community, Sivaasksthefollowingquestion:"(ls the Black writer) a writer who happens to be Black, or a Black person who happens to be a writer? The one seeksto libérate himself through his people, the other to libérate his people through him. The one is a professional, a mercenary on hirë to his people, the other is a soldier in the people's army." Without a doubt Siva is the latter. When invited to speak at the University of Michigan his response was "I will be happy to help you in your struggle in anyway lean, because from what you say in your letter, our struggle is one." He will be traveling to the U.S. in November and will speak at U-M on Thurs., Nov. 19 (see CALENDAR).