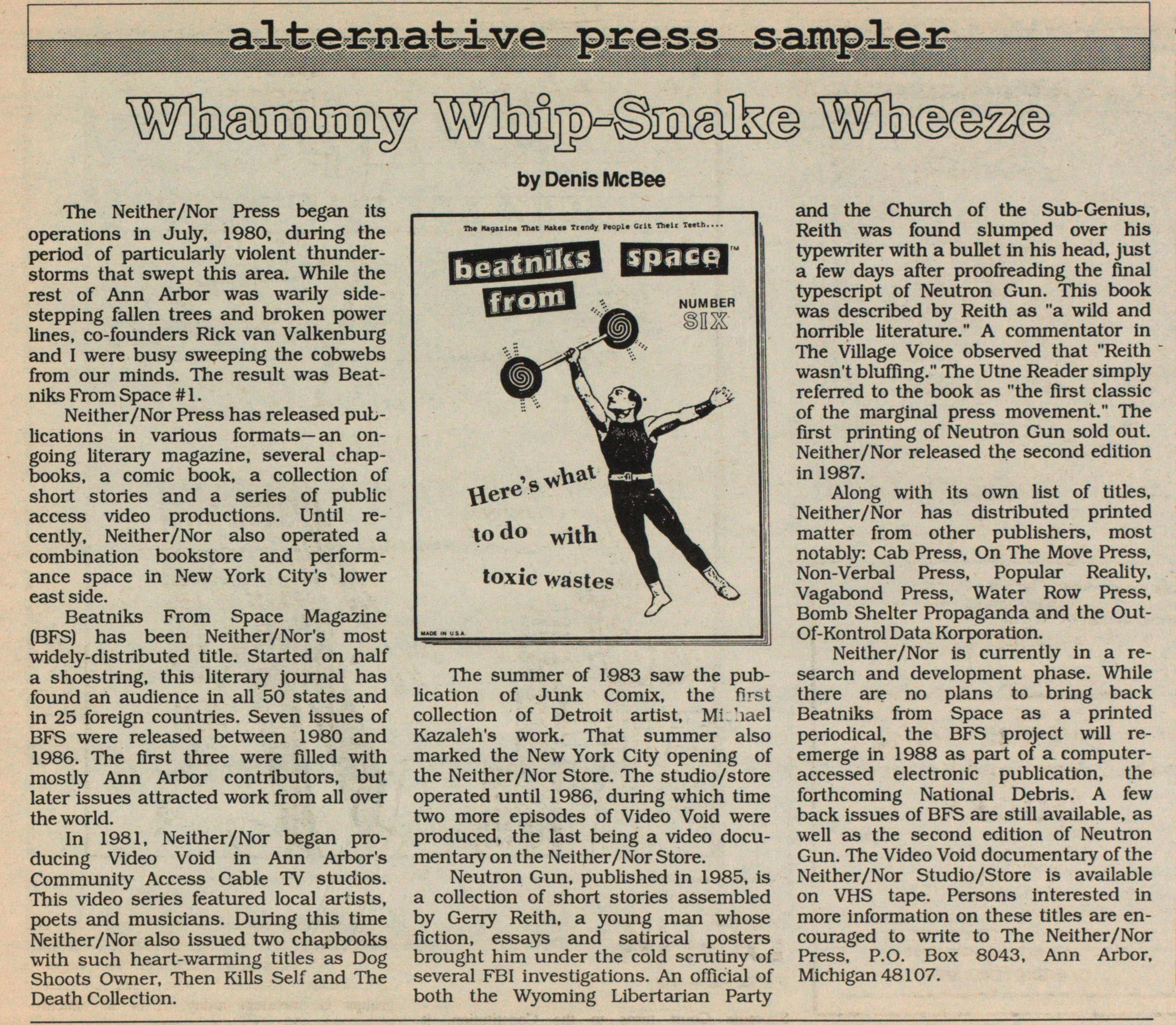 The NeitherNor Press began its operations in July, 1980, during the period of particularly violent thunderstorms that swept this area. While the rest of Ann Arbor was warily sidestepping fallen trees and broken power Unes, co-founders Riek van Valkenburg and I were busy sweeping the cobwebs from our minds. The result was Beatniks From Space # 1 . NeitherNor Press has released publications in various formats- an ongoing literary magazine, several chapbooks. a comic book, a collection of short stories and a series of public access video productions. Until recently, NeitherNor also operated a combination bookstore and performance space in New York City's lower east side. Beatniks From Space Magazine (BFS) has been NeitherNor's most widely-distributed title. Started on half a shoestring, this literary journal has found an audience in all 50 states and in 25 foreign countries. Seven issues of BFS were released between 1980 and 1986. The first three were filled with mostly Ann Arbor contributors, but later issues attracted work from all over the world. In 1981, NeitherNor began producing Video Void in Ann Arbor's Community Access Cable TV studios. This video series featured local aríists, poets and musicians. During this time NeitherNor also issued two chapbooks with such heart-warming titles as Dog Shoots Owner, Then Kills Self and The Death Collection. The summer of 1983 saw the publication of Junk Comix, the first collection of Detroit artist, Mi.'.iael Kazaleh's work. That summer also marked the New York City opening of the NeitherNor Store. The studiostore operated until 1986, during which time two more episodes of Video Void were produced, the last being a video documentary on the NeitherNor Store. Neutron Gun, published in 1985, is a collection of short stories assembled by Gerry Reith, a young man whose fiction, essays and satirical posters brought him under the cold scrutiny of several FBI investigations. An official of both the Wyoming Libertarían Party and the Church of the Sub-Genius, Reith was found slumped over hls typewriter wlth a bullet in his head, just a few days after proofreading the final typescript of Neutron Gun. This book was described by Reith as "a wild and horrible literature." A commentator in The Village Voice observed that "Reith " wasn't bluffing." The Utne Reader simply referred to the book as "the first classic of the marginal press movement." The first printing of Neutron Gun sold out. NeitherNor released the second edition in 1987. Along with its own list of titles, NeitherNor has distributed printed matter from other publishers, most notably: Cab Press, On The Move Press. Non-Verbal Press, Popular Reality, Vagabond Press, Water Row Press, Bomb Shelter Propaganda and the OutOf-Kontrol Data Korporation. NeitherNor is curren tly in a research and development phase. While there are no plans to bring back Beatniks from Space as a printed periodical, the BFS project will reemerge in 1988 as part of a computeraccessed electronic publication, the forthcoming National Debris. A few back issues of BFS are still available, as well as the second edition of Neutron Gun. The Video Void documentary of the NeitherNor StudioStore is available on VHS tape. Persons interested in more information on these titles are encouraged to write to The NeitherNor Press, P.O. Box 8043, Ann Arbor, Michigan 48107. alt ern a ti ve- pre s s-s ampl e r -