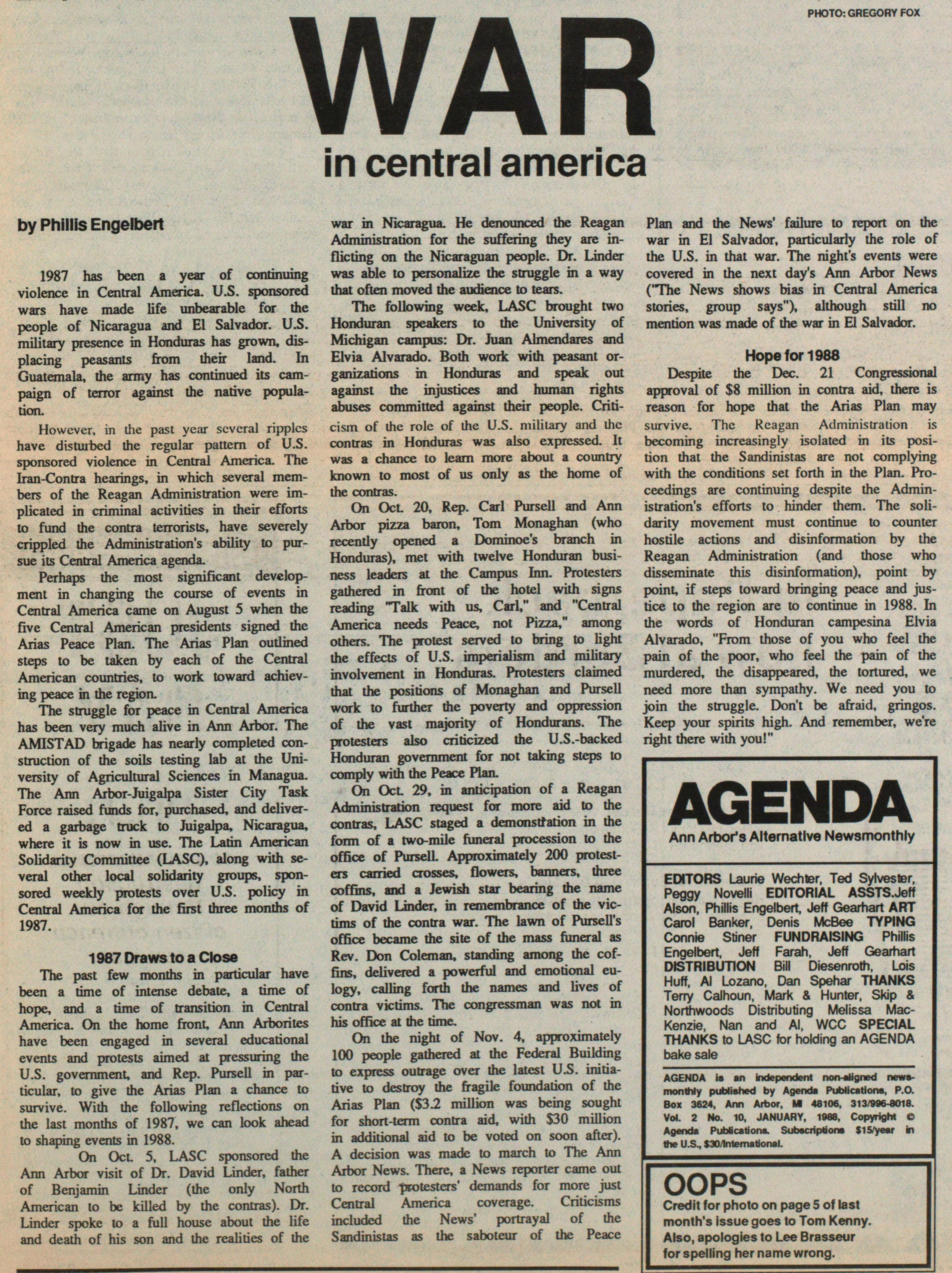 1987 has been a year of continuing violence in Central America. U.S. sponsored wars have made Ufe unbearablc for the people of Nicaragua and El Salvador. U.S. military presence in Honduras has grown, displacing peasants from their land. In Guatemala, the army has continued its campaign of terror dgainst the natíve population. Howcver, in die past year scvcral ripplcs have distuibed the regular pattem of U.S. sponsored violence in Central America. The Iran-Contra hearings, in which several membos of the Reagan Administration were implicated in criminal activities in their efforts to fund the contra terrorists, have severely crippled the Administration's ability to pursue its Central America agenda. Perhaps the most significant development in changing the course of events in Central America carne on August 5 when the five Central American presidents signed the Arias Peace Plan. The Arias Plan outlined steps to be taken by each of the Central American countries, to work toward achieving peace in the región. The struggle for peace in Central America has been very much alive in Ann Arbor. The AMISTAD brigade has nearly completed construction of the soils testing lab at the University of Agricultural Sciences in Managua. The Arm Arbor-Juigalpa Sister City Task Forcé raised funds for, purchased, and delivered a garbage truck to Juigalpa, Nicaragua, where it is now in use. The Latin American Solidarity Committee (LASC), along with several other local solidarity groups, sponsored weekry protests over U.S. policy in Central America for the first three months of 1987. 1 987 Draws to a Close The past few months in particular have been a time of intense debate, a time of hope, and a time of transition in Central America. On the home front, Ann Arborites have been engaged in several educational events and protests aimed at pressuring the U.S. govemment, and Rep. Pursell in particular, to give the Arias Plan a chance to survive. With the following reflections on the last months of 1987, we can look anead to shaping events in 1988. On OcL 5, LASC sponsored the Arm Arbor visit of Dr. David Linder, father of Benjamin Linder (the only North American to be killed by the contras). Dr. Linder spoke to a full house about the life and death of his son and the realiües of the war in Nicaragua. He denounced the Reagan Administraron for the suffeiing they are inflicting on the Nicaraguan people. Dr. Linder was able to pcrsonalize the struggle in a way that often moved the audience to tears. The following week, LASC brought two Honduran speakers to the University of Michigan campus: Dr. Juan Almendares and Elvia Alvarado. Both work with peasant organizations in Honduras and speak out against the injustices and human rights abuses commiited against their people. Criticism of ihc role of ihe U.S. military and ihc contras in Honduras was also expressed. It was a chance to leam more about a country known to most of us only as the home of the contras. On OcL 20, Rep. Cari Pursell and Ann Arbor pizza baron, Tom Monaghan (who recently opened a Dominoe's branch in Honduras), met with twelve Honduran business leaders at the Campus Inn. Protestéis gathered in front of the hotel with signs reading "Talk with us. Cari," and "Central America needs Peace, not Pizza," among others. The protest served to bring to light the effects of U.S. imperialism and military involvement in Honduras. Protestéis claimed that the positions of Monaghan and Pursell work to furtheT the poverty and oppression of the vast majority of Hondurans. The protesters also criucized the U.S.-backed Honduran government for not taking steps to comply with the Peace Plan. On Oct. 29, in anticipation of a Reagan Administration request for more aid to the contras, LASC staged a demonstfation in the form of a two-mile funeral procession to the office of PurselL Approximately 200 protesters carried crosses, flowers, barmers, three coffins, and a Jewish star bearing the name of David Linder, in remembrance of the victims of the contra war. The lawn of Pursell's office became the site of the mass funeral as Rev. Don Coleman, standing among the coffins, delivered a powerful and emotional eulogy, calling forth the names and lives of contra victims. The congressman was not in his office at the time. On the night of Nov. 4, approximately 100 people gathered at the Federal Building to express outrage over the latest U.S. iniiiative to destroy the fragüe foundation of the Arias Plan ($3.2 million was being sought for short-term contra aid, with $30 million in additional aid to be voted on soon after). A decisión was made to march to The Ann Arbor News. There, a News reporter came out to record protesters' demands for more just Central America coverage. Criticisms included the News' portrayal of the S andinistas as the saboteur of the Peace Plan and the News' failure to report on the war in El Salvador, particularly the role of the U.S. in that war. The night's events were covered in the next day's Ann Arbor News ("The News shows bias in Central America stories, group says"), although still no mention was made of the war in El Salvador. Hope for 1988 Despite the Dec. 21 Congressional approval of $8 million in contra aid, there is reason for hope that the Arias Plan may survive. The Reagan Administralion is becoming increasingly isolated in its position that the S andinistas are not complying with the conditions set forth in the Plan. Proceedings are continuing despite the Adminisiration's efforts to hinder them. The solidarity movement must continue to counter hostile actions and disinformation by the Reagan Administration (and those who disseminate this disinformation), point by point, if steps toward bringing peace and justice to the región are to continue in 1988. In the words of Honduran campesina Elvia Alvarado, "From those of you who feel the pain of the poor, who feel the pain of the murdered, the disappeared, the tortured, we need more than sympathy. We need you to join the struggle. Don't be afraid, gringos. Keep your spirits high. And remember, we're right there with you!"