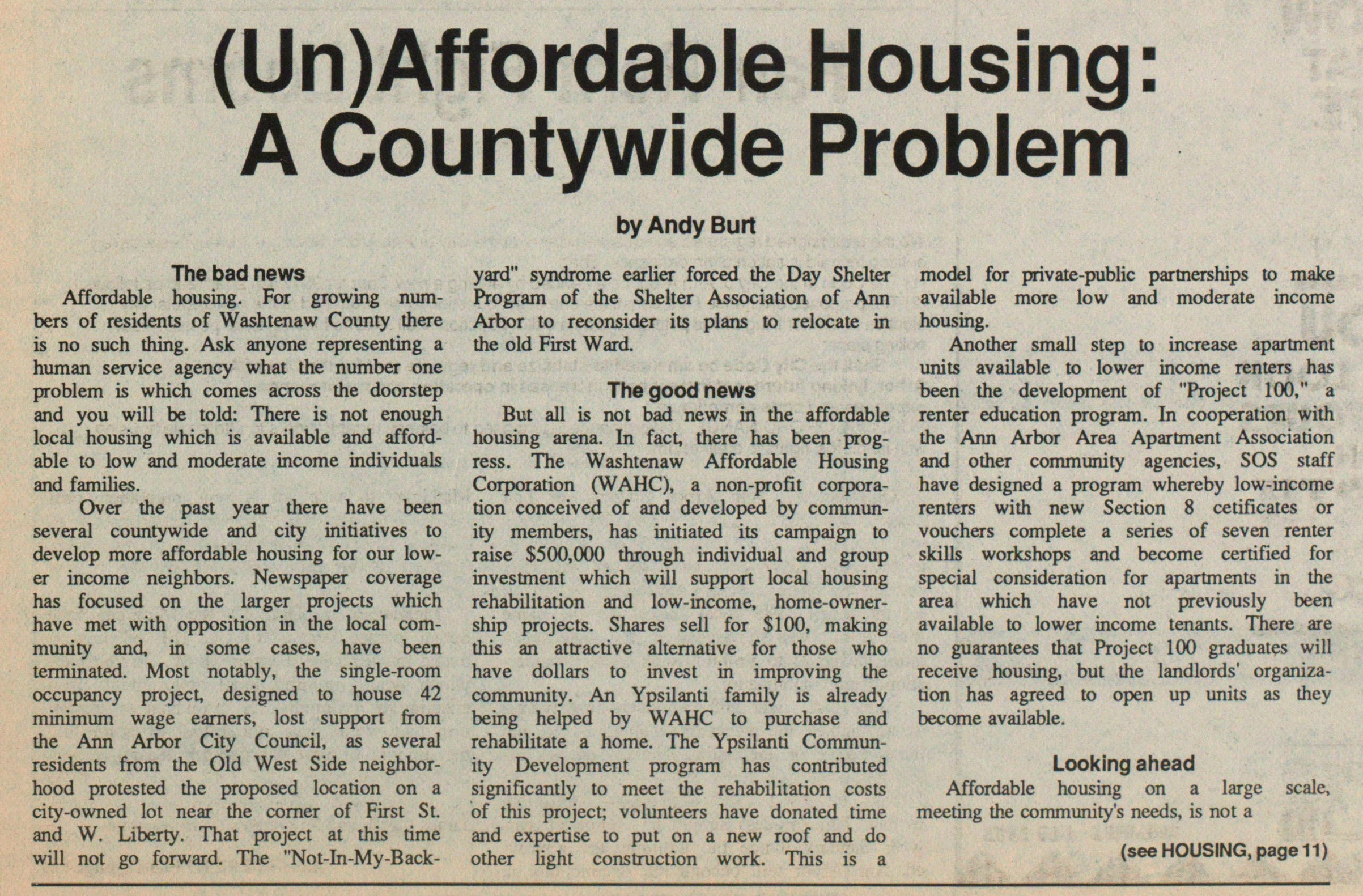 The bad news Affordable housing. For growing numbers of residents of Washtenaw County there is no such thing. Ask anyone representing a human service agency what the number one problem is which comes across the doorstep and you will be told: There is not enough local housing which is available and affordable to low and moderate income individuals and families. Over the past year there have been several countywide and city initiatives to develop more affordable housing for our lower income neighbors. Newspaper coverage has focused on the larger projects which have met with opposition in the local community and, in some cases, have been terminated. Most notably, the single-room occupancy project, designed to house 42 minimum wage earners, lost support from the Ann Arbor City Council, as several residents from the Old West Side neighborhood protested the proposed location on a city-owned lot near the comer of First St. and W. Liberty. That project at this time will not go forward. The yard" syndrome earlier forced the Day Shelter Program of the Shelter Association of Ann Arbor to reconsider its plans to relocate in the old First Ward. The good news But all is not bad news in the affordable housing arena. In fact, there has been progress. The Washtenaw Affordable Housing Corporation (WAHC), a non-profit corporation conceived of and developed by community members, has initiated its campaign to raise $500,000 through individual and group investment which will support local housing rehabilitation and low-income, home-ownership projects. Shares sell for $100, making this an attractive alternative for those who have dollars to invest in improving the community. An Ypsilanti family is already being helped by WAHC to purchase and rehabilitate a home. The Ypsilanti Community Development program has contributed signifïcantly to meet the rehabilitation costs of this project; volunteeTs have donated time and expertise to put on a new roof and do other light construction work. This is a model for private-public partnerships to make available more low and moderate income housing. Another small step to increase apartment units available to lower income renters has been the development of "Project 100," a ren ter educa ti on program. In cooperation with the Ann Arbor Area Apartment Association and other community agencies, SOS staff have designed a program whereby low-income renters with new Section 8 cetificates or vouchers complete a series of seven renter skills workshops and become certified for special consideraüon for apartments in the area which have not previously been available to lower income tenants. There are no guarantees that Project 100 graduates will receive housing, but the landlords' organization has agreed to open up units as they become available. Looking ahead Affordable housing on a large scale, meeting the community's needs, is not a (see HOUSING, page 11) Housing (from page 5) front-burner issue in any of the local government bodies. It wilJ take the'voices of the county's residents to change that. Several coalitions have formed around the affordable housing issue and have been effective in assessing the short and long-range needs for housing in the county and developing innovative programs to meet some of those needs. The Inter-agency Task Force on Emergency Shelter, representing the cities of Arm Arbor and Ypsilanti, Washtenaw County, Washtenaw United Way, and many human service organ-izations that provide direct shelter to homeless individuals and families - was al in developing and supporting the Rotating Church Shelter. The shelter housed 15 to 20 single men last year for 18 weeks, and opened again this year in October. The Task Force also conceived of and supported "Prospect Place," the SOS proposal for an emergency shelter for homeless children and their families in Ypsilanti scheduled to open in January 1988. The Task Force has also prepared a strategie planning report on sheltering, which will be released early in 1988. The Coalition for Displaced Women, an ad hoc group representing many organizations which provide direct services to women and families, gained the support of the Ann Arbor City Council to move the former Day Shelter facility to a city-owned lot and to open a transitional housing project for eight lower income, working women in the house. The Heart to Heart for the Homeless Walk, sponsored by the Interfaith Council for Peace, will be held again on April 9. Last year, the march involved 450 walkers and raised money for five shelter agencies in Ann Arbor and Ypsilanti. There are smaller initiatives in which a concemed person can get involved and the movement can grow. For more information about these initiatives and ways that you can help in this most critical of concerns for our community, cali or write Washtenaw Affordable Hous-ing Initiative, co SOS Community Cri-sis Center, 114 N. River St., Ypsilanti, MI 48198. 4858730. Ask for Kris, Susan or Andy.