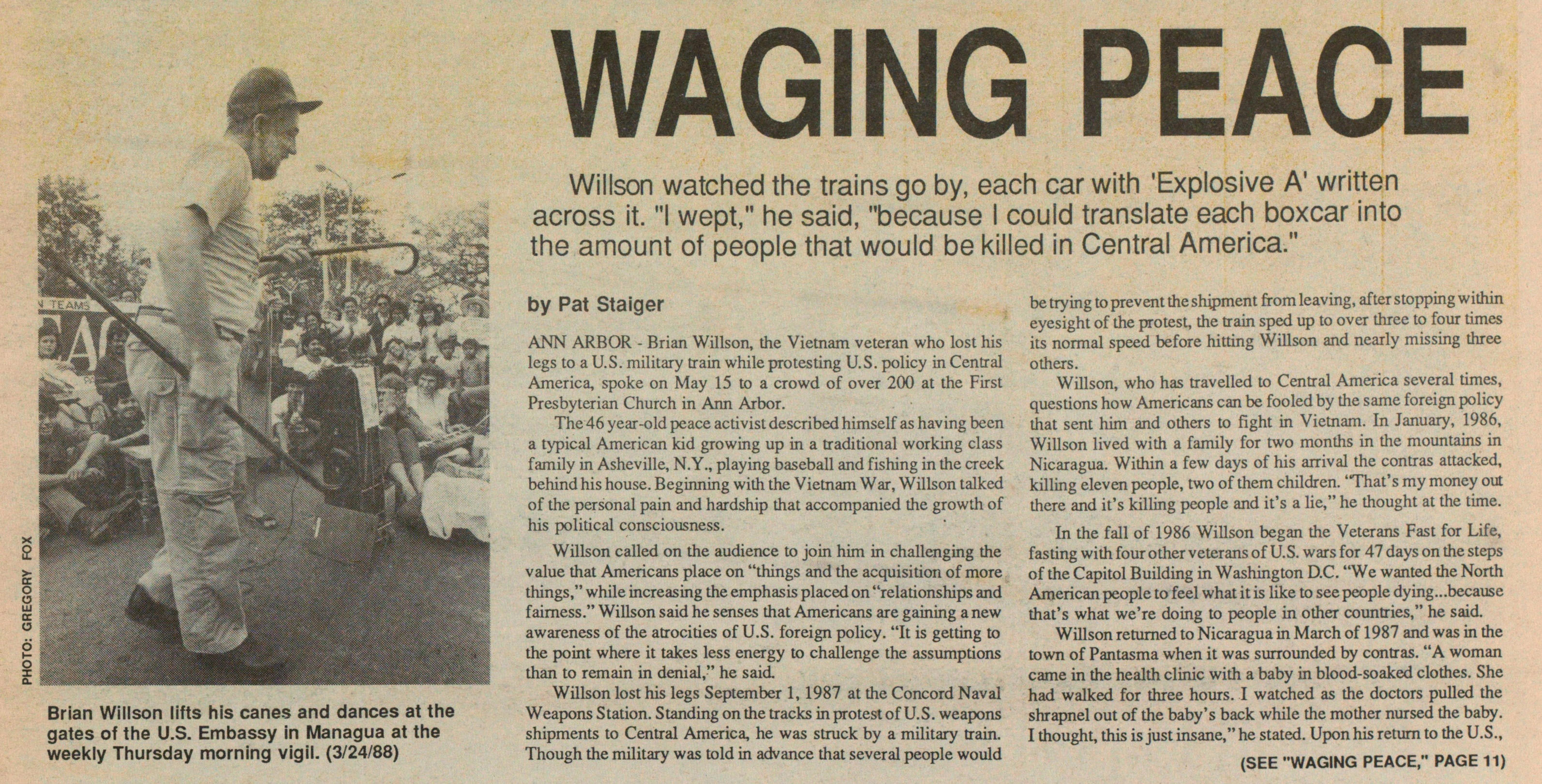 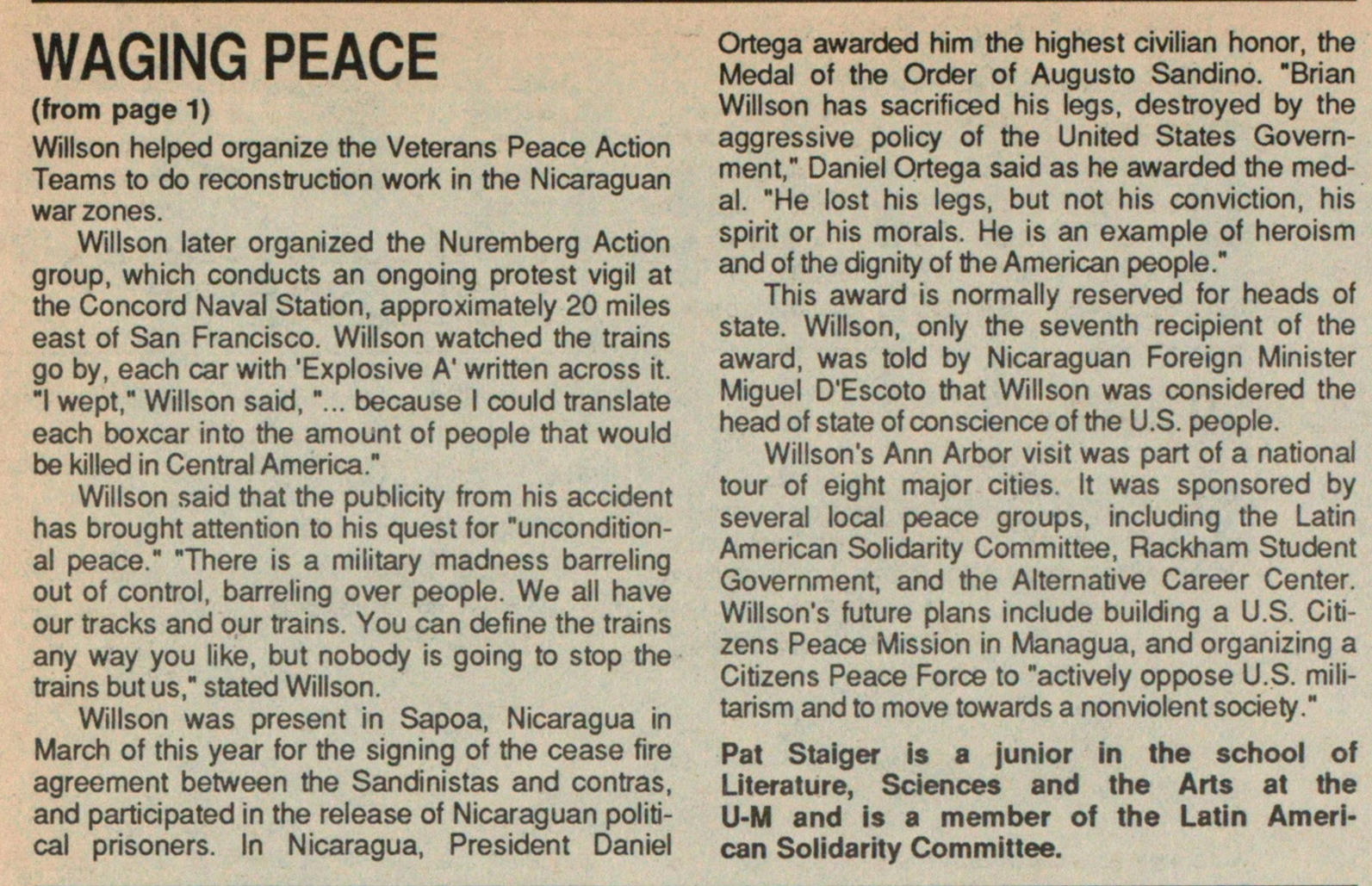 Willson watched the trains go by, each car with 'Explosive A1 written across it. "I wept," he said, "because I could translate each boxear into the amount of people that would be killed in Central America." ANN ARBOR - Brian Willson, the Vietnam veteran who lost his legs to a U.S. military train while protesting U.S. policy in Central America, spoke on May 15 to a crowd of over 200 at the First Presbyterian Church in Arm Arbor. The 46 year-old peace activist described himself as having been a typical American kid growing up in a traditional working class family in Asheville, N.Y., playing baseball and fishing in the creek behind his house. Beginning with the Vietnam War, Willson talked of the personal pain and hardship that accompanied the growth of his political consciousness. Willson called on the audience to join him in challenging the value that Americans place on "things and the acquisition of more things," while increasing the emphasis placed on "relationships and fairness." Willson said he senses that Americans are gaining a new awareness of the atrocities of U.S. foreign policy. "It is getting to the point where it takes less energy to challenge the assumptions than to remain in denial," he said. Willson lost his legs September 1, 1987 at the Concord Naval Weapons Station. Standing on the tracks in protest of U.S. weapons shipments to Central America, he was struck by a military train. Though the military was told in advance that several people would be trying to prevent the shipment from leaving, after stopping within eyesight of the protest, the train sped up to over three to four times its normal speed before hitting Willson and nearly missing three others. Willson, who has traveled to Central America several times, questions how Americans can be fooled by the same foreign policy that sent him and others to fight in Vietnam. In January, 1986, Willson lived with a family for two months in the mountains in Nicaragua. Within a few days of his arrival the contras attacked, killing eleven people, two of them children. "That's my money out there and it's killing people and it's a lie," he thought at the time. In the fall of 1986 Willson began the Veterans Fast for Life, fasting with four other veterans of U.S. wars for 47 days on the steps of the Capítol Building in Washington D.C. "We wanted the North American people to feel what it is like to see people dying...because that's what we're doing to people in other countries," he said. Willson returned to Nicaragua in March of 1987 and was in the town of Pantasma when it was surrounded by contras. "A woman carne in the health clinic with a baby in blood-soaked clothes. She had walked for three hours. I watched as the doctors pulled the shrapnel out of the baby's back while the mother nursed the baby. I thought, this is just insane, " he stated. Upon his return to the U.S., (SEE "WAGING PEACE," PAGE 11) WAGING PEACE (from page 1) Willson helped organize the Veterans Peace Action Teams to do reconstruction work in the Nicaraguan war zones. Willson later organized the Nuremberg Action group, which conducts an ongoing protest vigil at the Concord Naval Station, approximately 20 miles east of San Francisco. Willson watched the trains go by, each car with 'Explosivo A' written across it. "I wept," Willson said, "... because I could translate each boxear into the amount of people that would be killed in Central America." Willson said that the publicity from his accident has brought attention to his quest for "unconditional peace." "There is a military madness barreling out of control, barreling over people. We all have our tracks and our trains. You can define the trains any way you like, but nobody is going to stop the trains but us," stated Willson. Willson was present in Sapoa, Nicaragua in March of this year for the signing of the cease fire agreement between the Sandinistas and contras, and participated in the release of Nicaraguan political prisoners. In Nicaragua, President Daniel Ortega awarded him the highest civilian honor, the Medal of the Order of Augusto Sandino. "Brian Willson has sacrificed his legs, destroyed by the aggressive policy of the United States Government," Daniel Ortega said as he awarded the medal. "He lost his legs, but not his conviction, his spirit or his moráis. He is an example of heroism and of the dignity of the American people." This award s normally reserved for heads of state. Willson, only the seventh recipiënt of the award, was told by Nicaraguan Foreign Minister Miguel D'Escoto that Willson was considered the head of state of conscience of the U.S. people. Willson's Ann Arbor visit was part of a national tour of eight major cities. It was sponsored by several local peace groups, including the Latín American Solidarity Committee, Rackham Student Government, and the Alternative Career Center. Willson's future plans include building a U.S. Citizens Peace Mission in Managua, and organizing a Citizens Peace Force to "actively oppose U.S. militarism and to move towards a nonviolent society." Pat Steiger is a junior in the school of Literatura, Sciences and the Arts at the U-M and is a member of the Latin American Solidarity Committee.