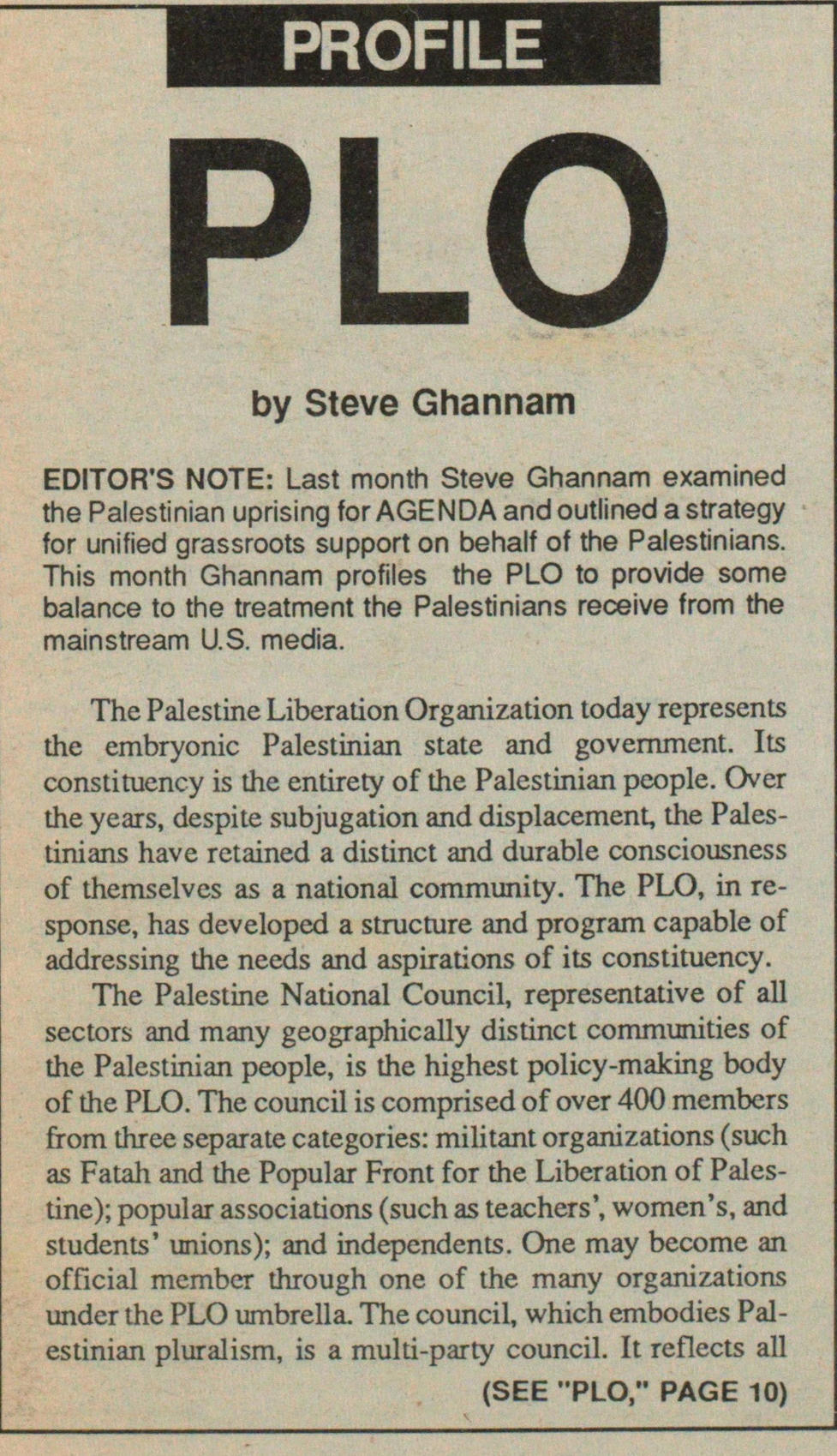 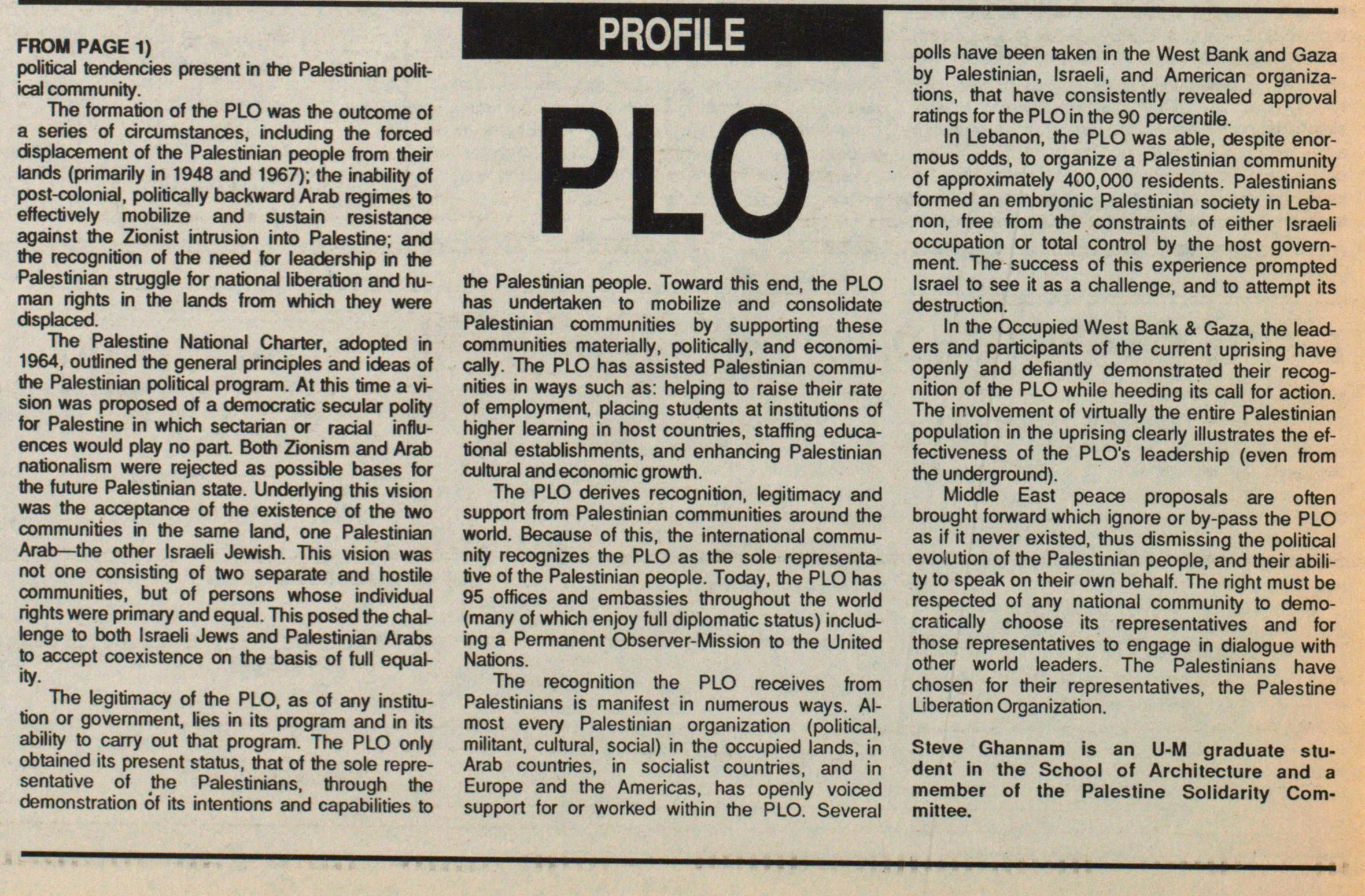 EDITOR'S NOTE: Last month Steve Ghannam examined the Palestinian uprising for AGENDA and outlined a strategy for unified grassroots support on behalf of the Palestinians. This month Ghannam profiles the PLO to provide some balance to the treatment the Palestinians receive from the mainstream U.S. media. The Palestine Liberation Organization today represente the embryonic Palestinian state and govemment. lts constituency is the entirety of the Palestinian people. Over the years, despite subjugation and displacement, the Palestinians have retained a distinct and durable consciousness of themselves as a national community. The PLO, in response, has developed a structure and program capable of addressing the needs and aspirations of its constituency. The Palestine National Council, representative of all sectors and many geographically distinct communities of the Palestinian people, is the highest policy-making body of the PLO. The council is comprised of over 400 members from thrce separate categories: militant organizations (such as Fatah and the Popular Front for the Liberation of Palestine); popular associations (such as teachers', women's, and students' unions); and independents. One may become an official member through one of the many organizations under the PLO umbrella. The council, which embodies Palestinian pluralism, is a multi-party council. It reflects all (SEE "PLO," PAGE 10) PLO FROM PAGE 1) political tendencies present n the Palestinian politcal community . The formation of the PLO was the outcome of a series of circumstances, induding the forced displacement of the Palestinian people from their lands (primarily in 1948 and 1967); the inability of post-colonial, politically backward Arab regimes to effectively mobilize and sustain resistance against the Zionist intrusión into Palestine; and the recognition of the need for leadership in the Palestinian struggle for national liberation and human rights in the lands from which they were displaced. The Palestine National Charter, adopted in 1964, outlined the general principies and ideas of the Palestinian political program. At this time a visión was proposed of a democratie secular pol'rty for Palestine in which sectarian or racial influences would play no part. Both Zionism and Arab nationalism were rejected as possible bases for the future Palestinian state. Underiying this visión was the acceptance of the existence of the two communities in the same land, one Palestinian Arab- the other Israeli Jewish. This visión was not one consisting of two separate and hostile communities, but of persons whose individual rights were primary and equal. This posed the challenge to both Israeli Jews and Palestinian Arabs to accept coexistence on the basis of full equality. The legitimacy of the PLO, as of any nstitution or government, lies in its program and in its ability to carry out that program. The PLO only obtained its present status, that of the sole representative of the Palestinians, through the ctemonstration óf its intentions and capabilities to the Palestinian people. Toward this end, the PLO has undertaken to mobilize and consolídate Palestinian communities by supporting these communities materially, politically, and economically. The PLO has assisted Palestinian communities in ways such as: helping to raise their rate of employment, placing students at institutions of hkjher leaming in host countries, staffing educational establishments, and enhancing Palestinian cultural and economie growth. The PLO derives recognition, legitimacy and support from Palestinian communities around the world. Because of this, the international community recognizes the PLO as the sole representative of the Palestinian people. Today, the PLO has 95 offices and embassies throughout the world (many of which enjoy full diplomatic status) including a Permanent Observer-Mission to the United Nabons. The recognition the PLO receives from Palestinians is manifest in numerous ways. Almost every Palestinian organization (political, militant, cultural, social) in the occupied lands, in Arab countries, in socialist countries, and in Europe and the Americas, has openly voiced support for or worked within the PLO. Several polls have been taken in the West Bank and Gaza by Palestinian, Israeli, and American organizatkns, that have consistently revealed approval ratings for the PLO n the 90 percentite. In Lebanon, the PLO was able, despite enormous odds, to organize a Palestinian community of approximately 400,000 residents. Palestinians formed an embryonic Palestinian society in Lebanon, free from the constraints of either Israeli occupation or total control by the host government. The success of this experience prompted Israel to see it as a challenge, and to attempt its destruction. In the Occupied West Bank & Gaza, the leaders and participants of the current uprising have openly and defiantly demonstrated their reoognition of the PLO while heeding its cali for action. The involvement of virtually the entire Palestinian population in the uprising clearly Ilústrales the effectiveness of the PLO's leadership (even from the underground). Middle East peace proposals are often brought forward which ignore or by-pass the PLO as if it never existed, thus dismissing the political evolution of the Palestinian people, and their ability to speak on their own behalf. The right must be respected of any national community to democratically choose its representaties and for those representatives to engage in dialogue with other world leaders. The Palestinians have chosen for their representatives, the Palestino Liberation Organizaron. Steve Ghannam is an U-M gradúate student in the School of Architecture and a member of the Palestine Solidarity Committee.