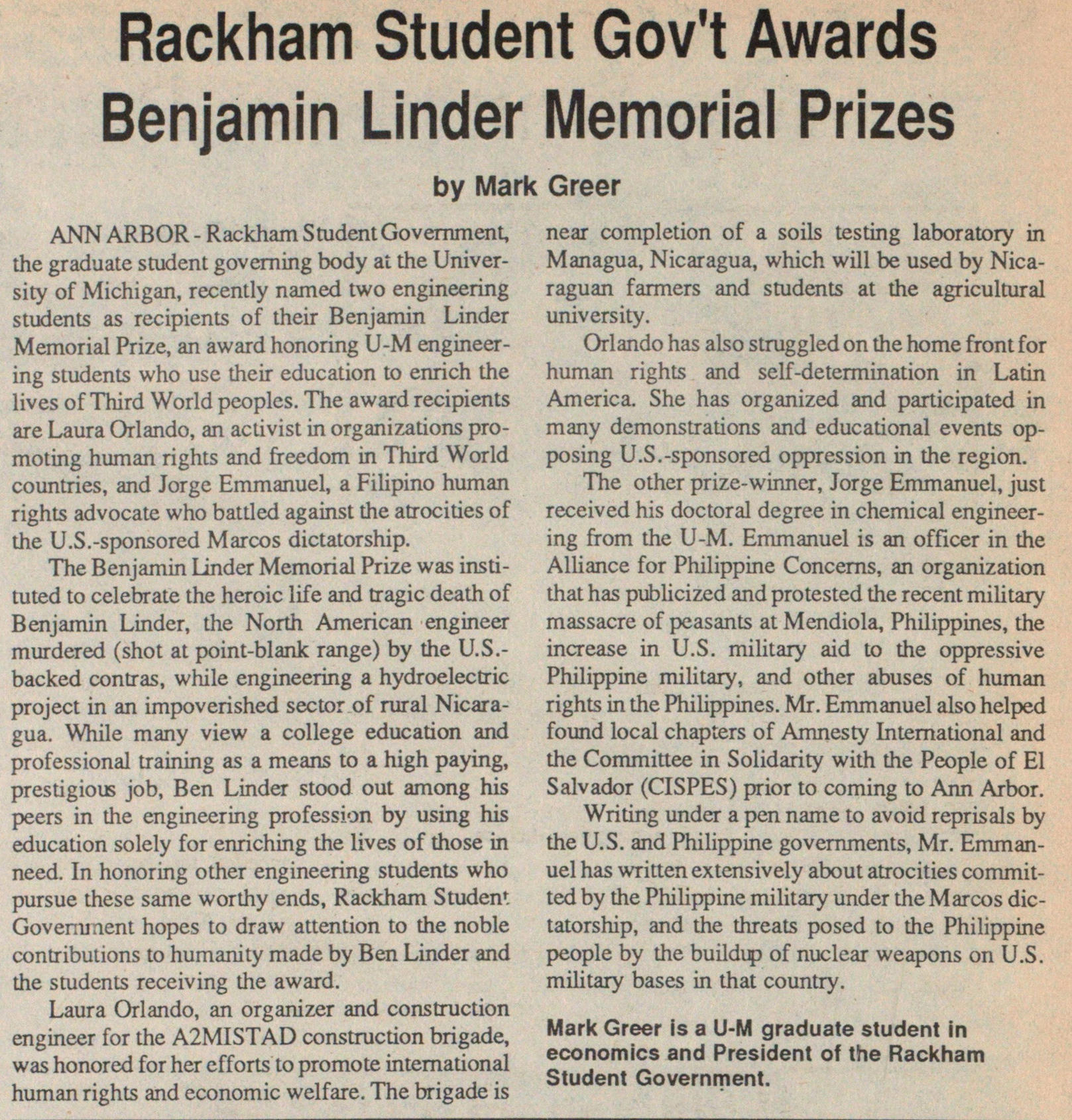 ANN ARBOR - Rackham Student Government, the gradúate student governing body at the University of Michigan, recently named two engineering students as recipients of their Benjamin Linder Memorial Prize, an award honoring U-M engineering students who use their education to enrich the lives of Third World peoples. The award recipients are Laura Orlando, an activist in organizations promoting human rights and freedom in Third World countries, and Jorge Emmanuel, a Filipino human rights advocate who battled against the atrocities of the U.S.-sponsored Marcos dictatorship. The Benjamin linder Memorial Prize was instituted to celébrate the heroic life and tragic death of Benjamin Linder, the North American engineer murdered (shot at point-blank range) by the U.S.backed contras, while engineering a hydroelectric project in an impoverished sector of rural Nicaragua. While many view a college education and professional training as a means to a high paying, prestigious job, Ben Linder stood out among his peers in the engineering profession by using his education solely for enriching the lives of those in need. In honoring other engineering students who pursue these same worthy ends, Rackham Student Govemment hopes to draw attention to the noble contributions to humanity made by Ben Linder and the students receiving the award. Laura Orlando, an organizer and construction engineer for the A2MISTAD construction brigade, was honored for her cfforts to promote international human rights and economie welfare. The brigade is near completion of a soils testing laboratory in Managua, Nicaragua, which will be used by Nicaraguan farmers and students at the agricultural university. Orlando has also struggled on the home front for human rights and self-determination in Latín America. She has organized and participated in many demonstrations and educational events opposing U.S.-sponsored oppression in the región. The other prize-winner, Jorge Emmanuel, just received his doctoral degree in chemical engineering frorn the U-M. Emmanuel is an officer in the Alliance for Philippine Concerns, an organization that has publicized and protested the recent military massacre of peasants at Mendiola, Philippines, the increase in U.S. military aid to the oppressive Philippine military, and other abuses of human rights in the Philippines. Mr. Emmanuel also helped found local chapters of Amnesty International and the Committee in Solidarity with the People of El Salvador (CISPES) prior to coming to Ann Arbor. Writing under a pen name to avoid reprisals by the U.S. and Philippine govemments, Mr. Emmanuel has written extensively about atrocities committed by the Philippine military under the Marcos dictatorship, and the threats posed to the Philippine people by the buildup of nuclear weapons on U.S. military bases in that country. Mark Greer is a U-M gradúate student in economics and President of the Rackham Student Government.