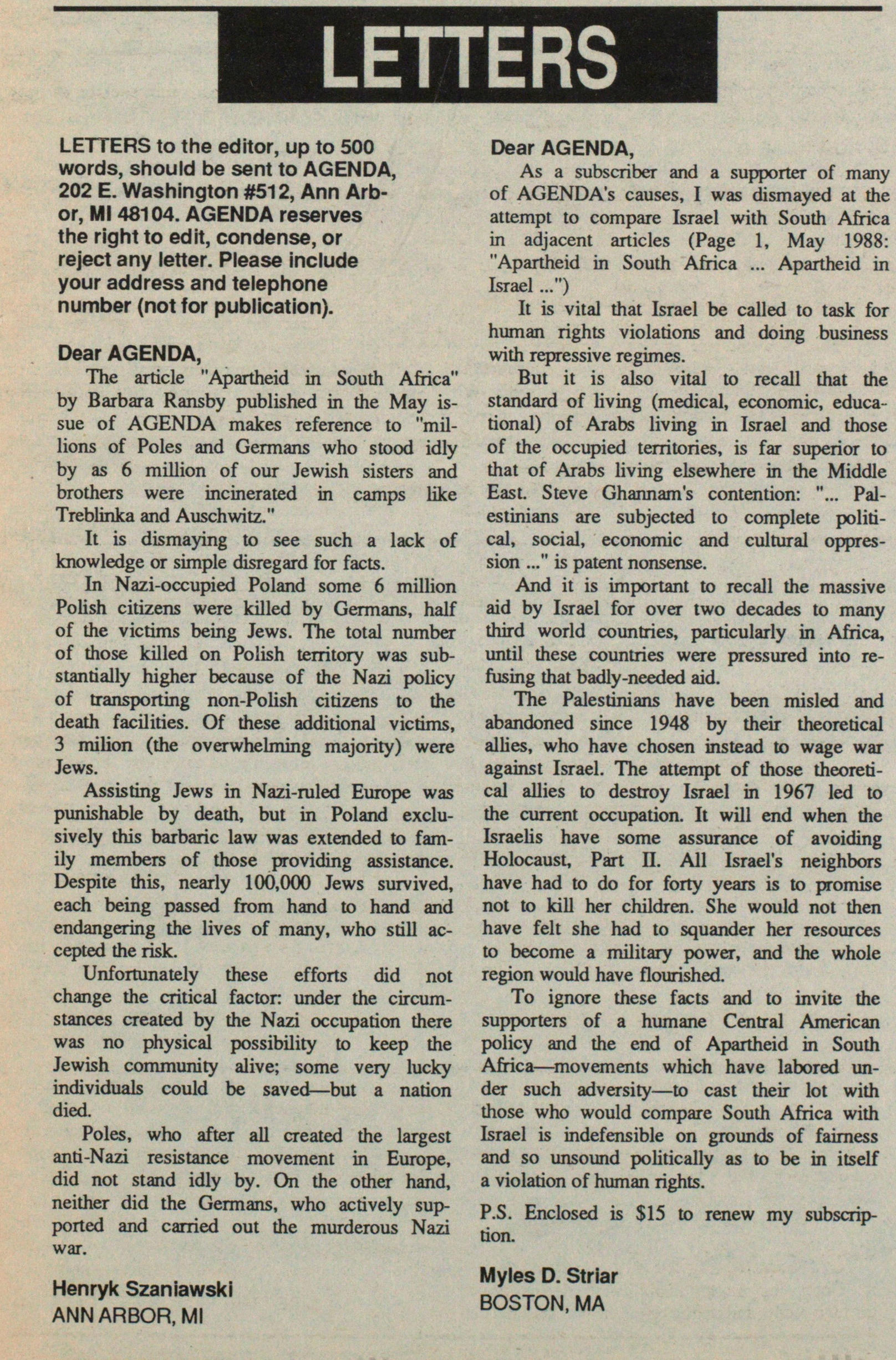 LETTERS to the editor, up to 500 words, should be sent to AGENDA, 202 E. Washington #512, Ann Arbor, Ml 48104. AGENDA reserves the right to edit, condense, or reject any letter. Please include your address and telephone number (not for publication). Dear AGENDA, The arricie "Apartheid in South África" by Barbara Ransby published in the May issue of AGENDA makes reference to "millions of Poles and Germans who stood idly by as 6 million of our Jewish sisters and brotheTs were incinerated in camps like Treblinka and Auschwitz." It is dismaying to see such a lack of knowledge or simple disregard for facts. In Nazi-occupied Poland some 6 million Polish citizens were killed by Germans, half of the victims being Jews. The total number of those killed on Polish territory was substantially higher because of the Nazi policy of transporting non-Polish cirizens to the death facilities. Of these additional victims, 3 milion (the overwhelming majority) were Jews. Assisting Jews in Nazi-ruled Europe was punishable by death, but in Poland exclusively this barbarie law was extended to family members of those providing assistance. Despite this, nearly 100,000 Jews survived, each being passed from hand to hand and endangering the lives of many, who srill accepted the risk. Unfortunately these efforts did not change the critical factor under the circumstances created by the Nazi occupation there was no physical possibility to keep the Jewish community alive; some very lucky individuals could be saved - but a nation died. Poles, who after all created the largest anti-Nazi resistance movement in Europe, did not stand idly by. On the other hand, neither did the Germans, who actively supported and carried out the murderous Nazi war. Henryk Szaniawski ANNARBOR.MI Dear AGENDA, As a subscriber and a supporter of many of AGENDA'S causes, I was dismayed at the attempt to compare Israel with South África in adjacent articles (Page 1, May 1988: "Apartheid in South África ... Apartheid in Israel ...") It is vital that Israel be called to task for human rights violations and doing business with repressive regimes. But it is also vital to recall that the standard of living (medical, economie, educa tional) of Arabs living in Israel and those of the occupied tenitories, is far superior to that of Arabs living elsewhere in the Middle East. Steve Ghannam's contention: "... Palestinians are subjected to complete political, social, economie and cultural oppression ..." is patent nonsense. And it is important to recall the massive aid by Israel for over two decades to many third world countries, particularly in África, until these countries were pressured into refusing that badly-needed aid. The Palestinians have been misled and abandoned since 1948 by their theoretical allies, who have chosen instead to wage war against Israel. The attempt of those theoretical allies to destroy Israel in 1967 led to the current occupation. It will end when the Israelis have some assurance of avoiding Holocaust, Part II. All Israel's neighbors have had to do for forty years is to promise not to kill her children. She would not then have feit she had to squander her resources to become a military power, and the whole región would have flourished. To ignore these facts and to invite the supporters of a humane Central American policy and the end of Apartheid in South África - movements which have labored under such adversity - to cast their lot with those who would compare South África with Israel is indefensibie on grounds of fairness and so unsound politically as to be in itself a violation of human rights. P.S. Enclosed is $15 to renew my subscription.