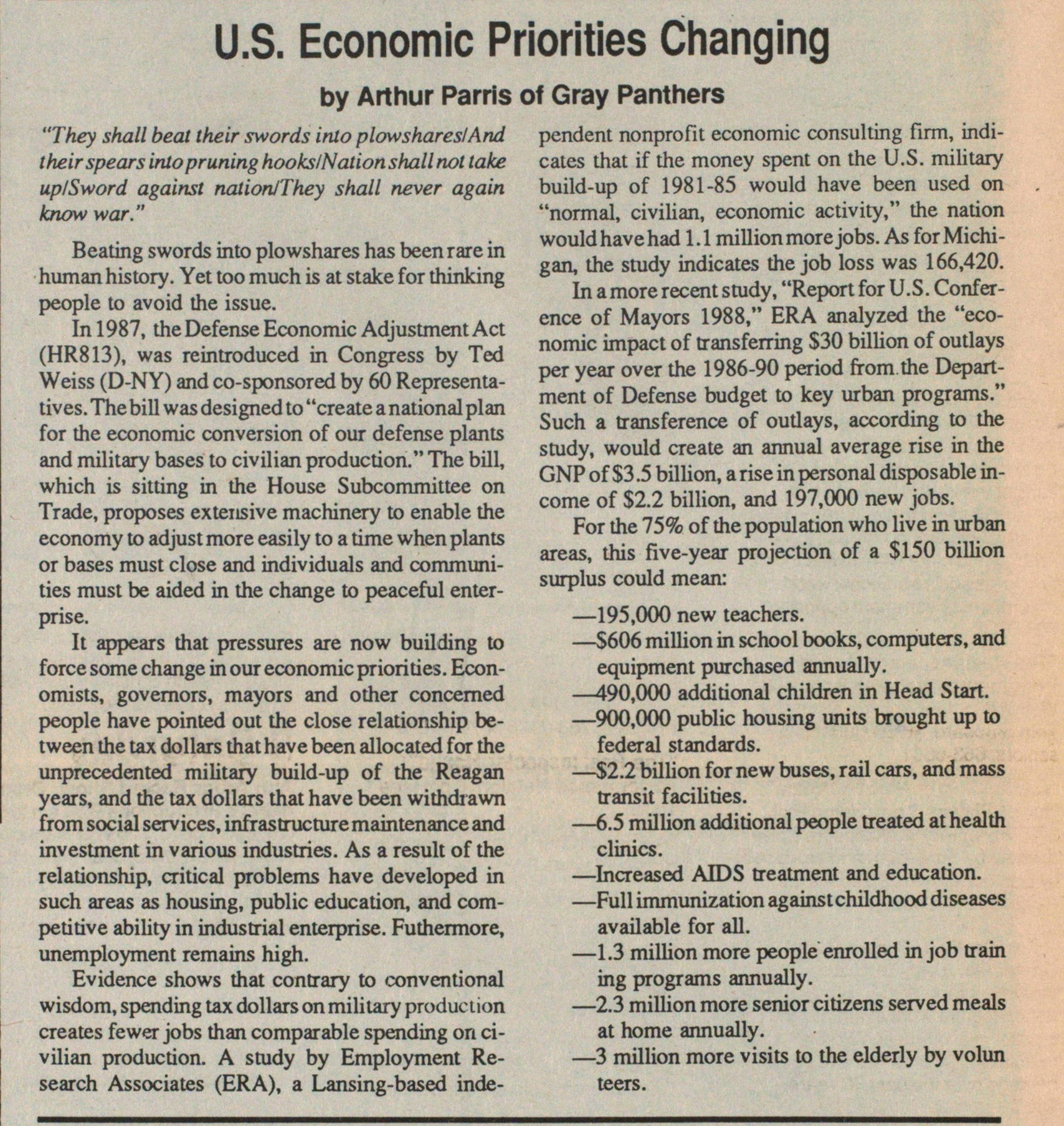 "They shall beat their swords inio plowshareslAnd iheirspears intopruning hookslNationshallnol lake upISword against nalionThey shall never again know war." Beating swords into pío wshares has been rare in human history . Yet too much is at stake for thinking people to avoid the issue. In 1 987, the Defense Economie Adjustment Act (HR813), was reintroduced in Congress by Ted Weiss (D-NY) and co-sponsored by 60 Representatives. The bill was designed to "créate a national plan for the economie conversión of our defense plants and military bases to civilian production." The bill, which is sitting in the House Subcommittee on Trade, proposes extensive machinery to enable the economy to adjust more easily to a time when plants or bases must close and individuals and communities must be aided in the change to peaceful enterprise. It appears that pressures are now building to force some change in our economie priori ties. Economists, governors, mayors and other concerned people have pointed out the close relationship between the tax dollars that have been allocated for the unprecedented military build-up of the Reagan years, and the tax dollars that have been withdiawn ' from social services, infrastructuremaintenance and investment in various industries. As a result of the relationship, critical problems have developed in such areas as housing, public education, and competitive ability in industrial enterprise. Futhermore, unemployment remains high. Evidence shows that contrary to conventional wisdom, spending tax dollars on military production creates fewer jobs than comparable spending on civilian production. A study by Employment Research Associates (ERA), a Lansing-based pendent nonprofit economie consulting firm, indicates that if the money spent on the U.S. military build-up of 1981-85 would have been used on "normal, civilian, economie activity," the nation would have had 1 . 1 million more jobs. As for Michigan, the study indicates the job loss was 166,420. In a more recent study, "Report for U.S. Conference of Mayors 1988," ERA analyzed the "economie impact of transferring S30 billion of outlays per year over the 1986-90 period from the Department of Defense budget to key urban programs." Such a transference of outlays, according to the study, would créate an annual average rise in the GNP of $3.5 billion, arise in personal disposable income of $2.2 billion, and 197,000 new jobs. For the 75% of the population who live in urban areas, this five-year projection of a $150 billion surplus could mean: -195,000 new teachers. - S606 million in school books, computers, and equipment purchased annually. - 490,000 additional children in Head Start. - 900,000 public housing units brought up to federal standards. - $2.2 billion fornew buses, rail cars, and mass transit facilities. - 6.5 million additional people treated at health clinics. - Increased AIDS treatment and education. - Full immunization againstchildhood diseases available for all. - 1.3 million more people enrolled in job train ing programs annually. - 2.3 million more senior citizens served meals at home annually. - 3 million more visits to the elderly by volun teers.