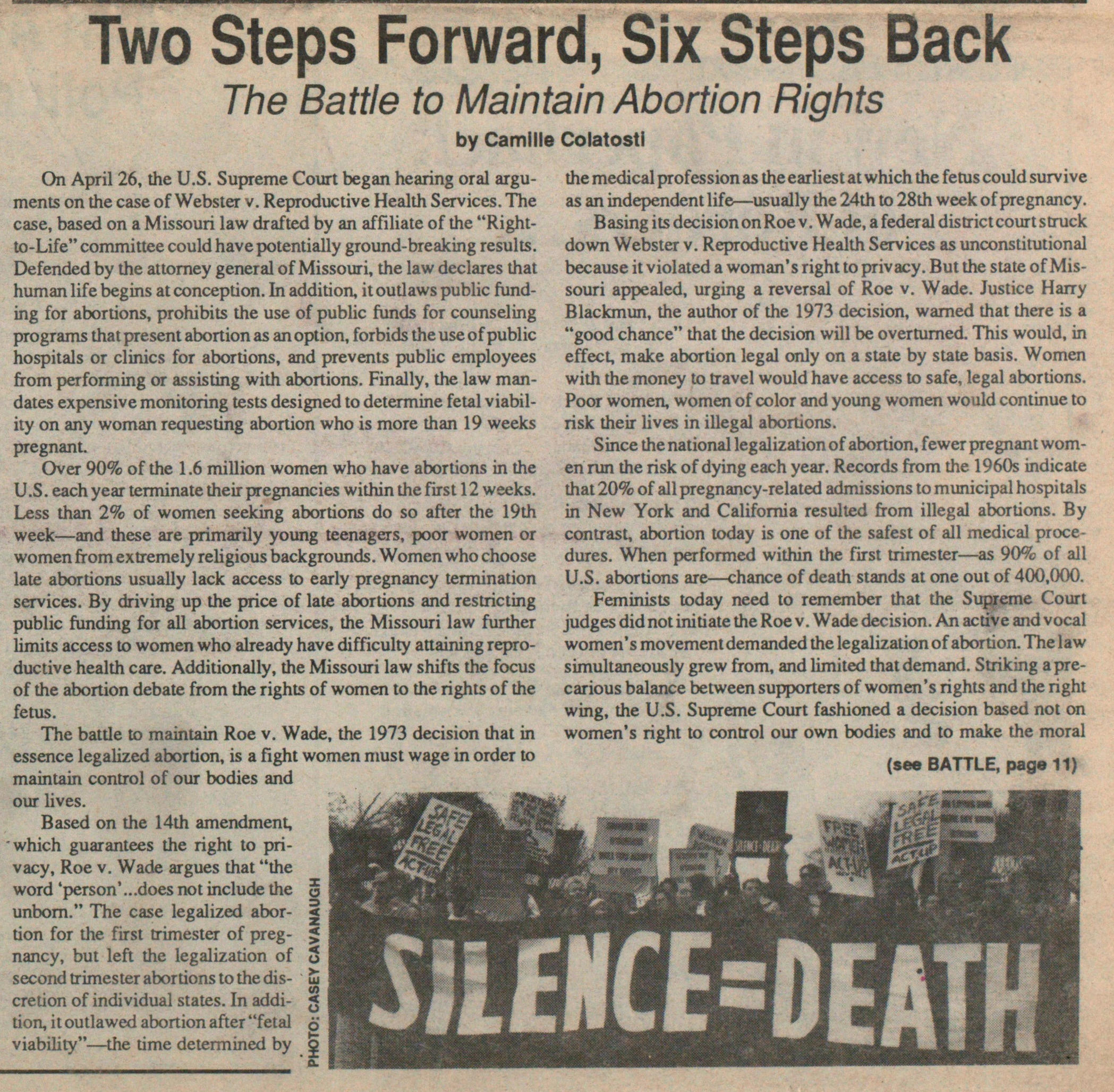 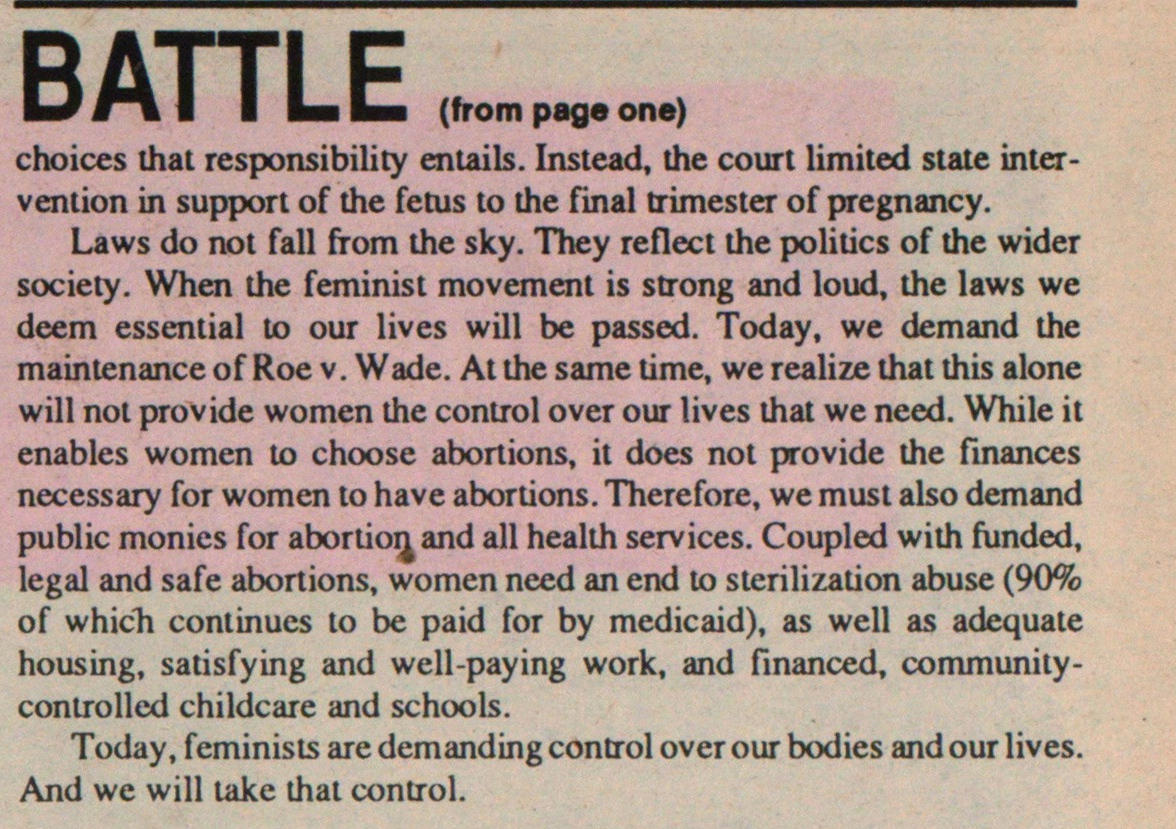 On April 26, the U.S. Supreme Court began hearing oral arguments on the case of Webster v. Reproductive Health Services. The case, based on a Missouri law drafted by an affiliate of the "Rightto-Life" committee could have potentially ground-breaking results. Defended by the attomey general of Missouri, the law declares that human life begins at conception. In addition, it outlaws public funding for abortions, prohibits the use of public funds for counseling programs that present abortion as anoption, forbids the use of public hospitals ot clinics for abortions, and prevents public employees from performing or assisting with abortions. Finally, the law mandates expensive monitoring tests designed to determine fetal viability on any woman requesting abortion who is more than 19 weeks pregnant. Over 90% of the 1 .6 million women who have abortions in the U.S . each year terminate their pregnancies within the first 1 2 weeks. Less than 2% of women seeking abortions do so after the 19th week - and these are primarily young teenagers, poor women or women from extremely religieus backgrounds. Women who choose late abortions usually lack access to early pregnancy termination services. By driving up the price of late abortions and restricting public funding for all abortion services, the Missouri law further limits access to women who already have difficulty attaining reproductive health care. Additionally, the Missouri law shifts the focus of the abortion debate from the rights of women to the rights of the fetus. The battle to maintain Roe v. Wade, the 1973 decisión that in essence legalized abortion, is a fïght women must wage in order to maintain control of our bodies and our lives. Based on the 14th amendment, which guarantees the right to privacy, Roe v. Wade argües that "the word 'person'...does not include the unbom." The case legalized abortion for the first trimester of pregnancy, but left the legalization of second trimester abortions to the discretion of individual states. In addition, it outlawed abortion after "fetal viability" - the time determined by the medical profession as the earliest at which the fetus could survi ve as an independent life - usually the 24th to 28th week of pregnancy. Basing its decisión onRoev. Wade, a federal district courtstruck down Webster v. Reproductive Health Services as unconstitutional because it violated a woman's right to privacy. But the state of Missouri appealed, urging a reversal of Roe v. Wade. Justice Harry Blackmun, the author of the 1973 decisión, wamed that there is a "good chance" that the decisión will be overtumed. This would, in effect, make abortion legal only on a state by state basis. Women with the money to travel would have access to safe, legal abortions. Poor women, women of color and young women would continue to risk their lives in illegal abortions. Since the national legal ization of abortion, fewer pregnant women run the risk of dying each year. Records from the 1 960s indícate that 20% of all pregnancy-related admissions to municipal hospitals in New York and California resulted from illegal abortions. By contrast, abortion today is one of the safest of all medical procedures. When performed within the first trimester - as 90% of all U.S. abortions are - chance of death stands at one out of 400,000. Feminists today need to remember that the Supreme Court judges did not initiate the Roe v . Wade decisión. An active and vocal women's movement demanded the legalization of abortion. The law simultaneously grew from, and limited that demand. Striking a precarious balance between supporters of women's rights and the right wing, the U.S. Supreme Court fashioned a decisión based not on women's right to control our own bodies and to make the moral (seeBATTLE, page 11) mJ r I La Lm ((rom page one) choices that responsibility entails. Instead, the couri limited state intervention in support of the fetus to the final trimester of pregnancy . Laws do not fall from the sky. They reflect the politics of the wider society. When ihe feminist movement is strong and loud, the laws we deern essential to our lives will be passed. Today, we demand the maintenance of Roe v. Wade. At the same time, we realize that this alone will not provide women the control over our lives that we need. While it enables women to choose abortions, it does not provide the finances necessary for women to have abortions. Therefore, we must also demand public monies for aboriioijand all healih services. Coupled with funded, legal and safe abortions, women need an end to sterilization abuse (90% of which continúes to be paid for by medicaid), as well as adequate housing, satisfying and well-paying work, and financed, communitycontrollcd childcare and schools. Today, feminists are demanding control over our bodies and our lives. And we will take that control.