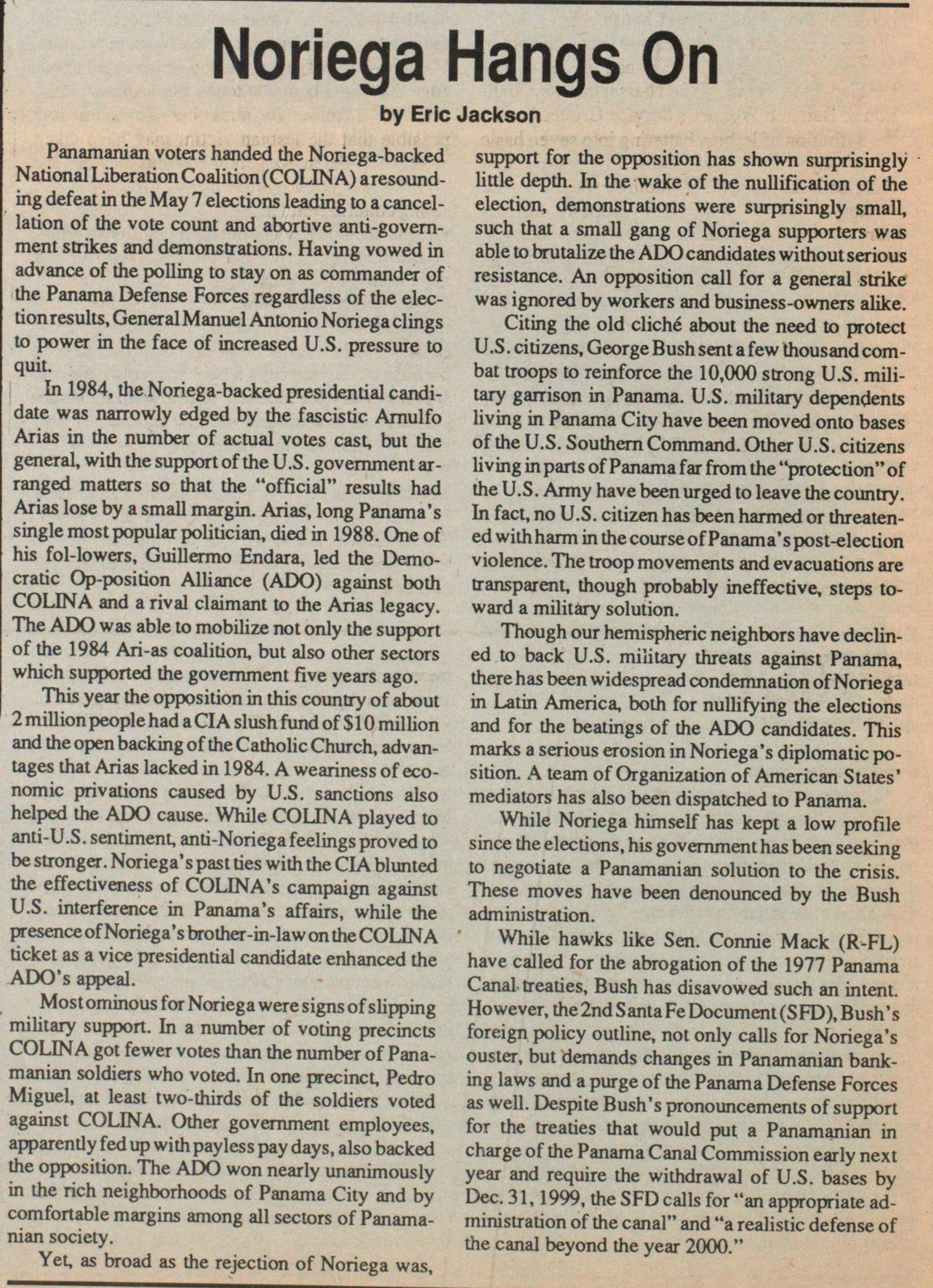 Panamanian voters handed the Noriega-backed National Liberation Coalition (COLINA) a resounding defeat in the May 7 elections leading to a cancellation of the vote count and abortive anti-government strikes and demonstrations. Having vowed in advance of the polling to stay on as commander of the Panama Defense Forces regardless of the electionresults. General Manuel Antonio Noriegaclings to power in the face of increased U.S. pressure to quit. ín 1984, the Noriega-backed presidential candidate was narrowly edged by the fascistic Arnulfo Arias in the number of actual votes cast, but the general, with the support of the U.S . govemment arranged matters so that the "official" results had Arias lose by a small margin. Arias, long Panama's single most popular politician, died in 1988. One of his fol-lowers, Guillermo Endara, led the Democratie Op-position Alliance (ADO) against both COLINA and a rival claimant to the Arias legacy. The ADO was able to mobilize not only the support of the 1984 Ari-as coalition, but also other sectors which supported the govemment five years ago. This year the opposition in this country of about 2 million people had a Cl A slush fund of $1 0 million and the open backing of the Catholic Church, advantages that Arias lacked in 1984. A weariness of economie privations caused by U.S. sanctions also helped the ADO cause. While COLINA played to anti-U.S. sentiment, anti-Noriegafeelingsproved to be stronger. Noriega's past ties with the CIA blunted the effectiveness of COLINA's campaign against U.S. interference in Panama's affaire, while the presence of Noriega's brother-in-law on the COLINA ticket as a vice presidential candidate enhanced the ADO's appeal. Most ominous for Noriega were signs of slipping military support. In a number of voting precincts COLINA got fewer votes than the number of Panamanian soldiers who voted. In one precinct, Pedro Miguel, at least two-thirds of the soldiers voted against COLINA. Other govemment employees, apparently fed up with payless pay day s, also backed the opposition. The ADO won nearly unanimously in the rich neighborhoods of Panama City and by comfortable margins among all sectors of Panamanian society. Yet, as broad as the rejection of Noriega was. support for the opposition has shown surprisingly little depth. In the wake of the nullification of the election, demonstrations were surprisingly small, such that a small gang of Noriega supporters was able to brutalize the ADO candidatos without serious resistance. An opposition cali for a general strike was ignored by workers and business-owners alike. Citing the old cliché about the need to protect U.S. citizens, GeorgeBushsentafew thousandcombat troops to reinforce the 10,000 strong U.S. military garrison in Panama. U.S. military dependents living in Panama City have been moved onto bases of the U.S. Southern Command. Other U.S. citizens living in parts of Panama f ar from the "protection" of the U.S. Army have been urged to leave the country. In fact, no U.S. citizen has been harmed or threatened with harm in the course of Panama' s post-election violence. The troop movements and evacuations are transparent, though probably ineffective, steps toward a military solution. Though our hemispheric neighbors have declined to back U.S. military threats against Panama, there has been widespread condemnation of Noriega in Latin America, both for nullifying the elections and for the beatings of the ADO candidates. This marks a serious erosión in Noriega's diplomatic position. A team of Organization of American States' mediators has also been dispatched to Panama. While Noriega himself has kept a low profile since the elections, his govemment has been seeking to negotiate a Panamanian solution to the crisis. These moves have been denounced by the Bush administration. While hawks like Sen. Connie Mack (R-FL) have called for the abrogation of the 1977 Panama Canal treaties, Bush has disavowed such an intent. However, the 2nd S anta Fe Document (S FD), Bush' s foreign policy outline, not only calis for Noriega's ouster, but demands changes in Panamanian banking laws and a purge of the Panama Defense Forces as well. Despite Bush's pronouncements of support for the treaties that would put a Panamanian in charge of the Panama Canal Commission early next year and require the withdrawal of U.S. bases by Dec. 3 1 , 1 999, the SFD calis for "an appropriate administration of the canal" and "a realistic defense of the canal beyond the year 2000."