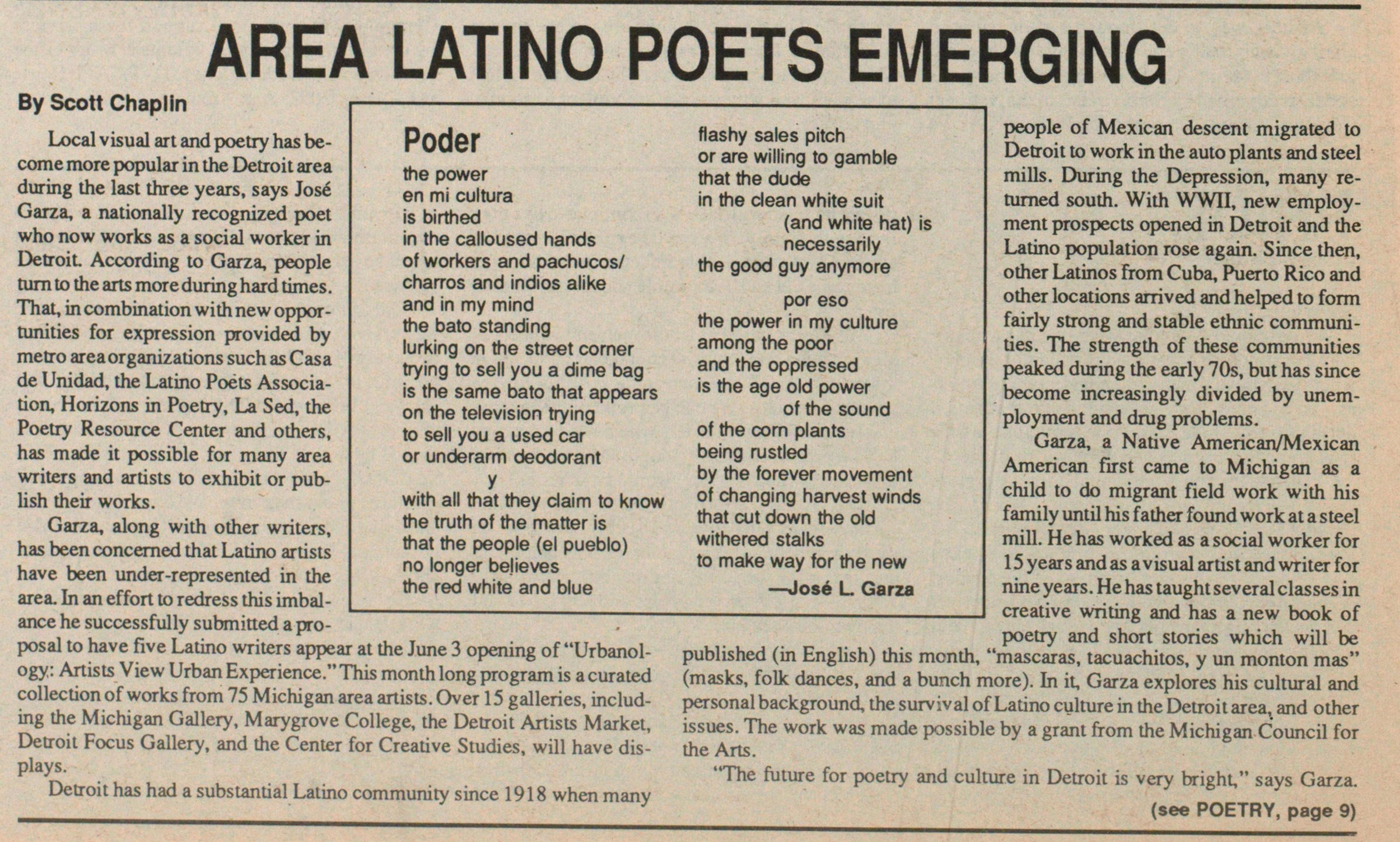 Local visual art and poetry has become more popular in the Detroit área during the last three years, says José Garza, a nationally recognized poet who now works as a social worker in Detroit. According to Garza, people tum to the arts more during hard times . That, in combination with ne w opportunities for expression provided by metro areaorganizations such as Casa de Unidad, the Latino Poets Association, Horizons in Poetry, La Sed, the Poetry Resource Center and others, has made it possible for many area writers and artists to exhibit or publish their works. Garza, along with other writers, has been concemed that Latino artists have been under-represented in the area. In an effort to redress this imbalance he successfully submitted a posal to have five Latino writers appear at the June 3 opening of "Urbanology : Artists View Urban Experience." This month long program is a curated collectionof works from 75 Michigan área artists. Over 15 galleries, including the Michigan Gallery, Marygrove College, the Detroit Artists Market, Detroit Focus Gallery, and the Center for Creative Studies, will have displays. Detroit has had a substantial Latino community since 1918 when many people of Mexican descent migrated to Detroit to work in the auto plants and steel milis. During the Depression, many returned south. With WWII, new employment prospecte opened in Detroit and the Latino population rose again. Since then, other Latinos from Cuba, Puerto Rico and other locations arrived and helped to form fairly strong and stable ethnic communities. The suength of these communities peaked during the early 70s, but has since become increasingly divided by unemployment and drug problems. Garza, a Native AmericanMexican American first carne to Michigan as a child to do migrant field work with his family until his father found work at a steel mili. He has worked as a social worker for 1 5 years and as a visual artist and writer for nine years. He has taught several classes in creative writing and has a new book of poetry and short stones which will be published (in English) this month, "mascaras, tacuachitos, y un montón mas" (masks, folk dances, and a bunch more). In it, Garza explores his cultural and personal background, the survival of Latino culture in the Detroit area, and other issues. The work was made possible by a grant from the Michigan Council for the Arts. "The future for poetry and culture in Detroit is very bright," says Garza. (see POETRY, page 9) Poder the power en mi cultura is birthed in the calloused hands of workers and pachucos charros and indios alike and in my mind the bato standing lurking on the street corner trying to sell you a dime bag is the same bato that appears on the televisión trying to sell you a used car or underarm deodorant y with all that they claim to know the truth of the matter is that the people (el pueblo) no longer believes the red white and blue flashy sales pitch or are willing to gamble that the dude in the clean white suit (and white hat) is necessarily the good guy anymore por eso the power in my culture among the poor and the oppressed s the age oíd power of the sound of the corn plants being rustled by the forever movement of changing harvest winds that cut down the old withered stalks to make way for the new -José L Garza POETRY (front page 6) "There are more and more opportunities for minority and women artists. The more experience they get, the more young people will view them as positive role models." The June 3 opening of the nology exhibition at the Michigan Gallery (see Calendar) will combine poetiy, music and art. Other poets appearing with José include Midalia Quiñones, Delfín Muñoz (both from Puerto Rico), Marta Lagos (Mexican descent) and Lolita Hernández Gray (from Trinidad). A repeat of the June 3 readings will be held June 24 at the same location.