Upcoming Election Plants Nicaragua Back In The News 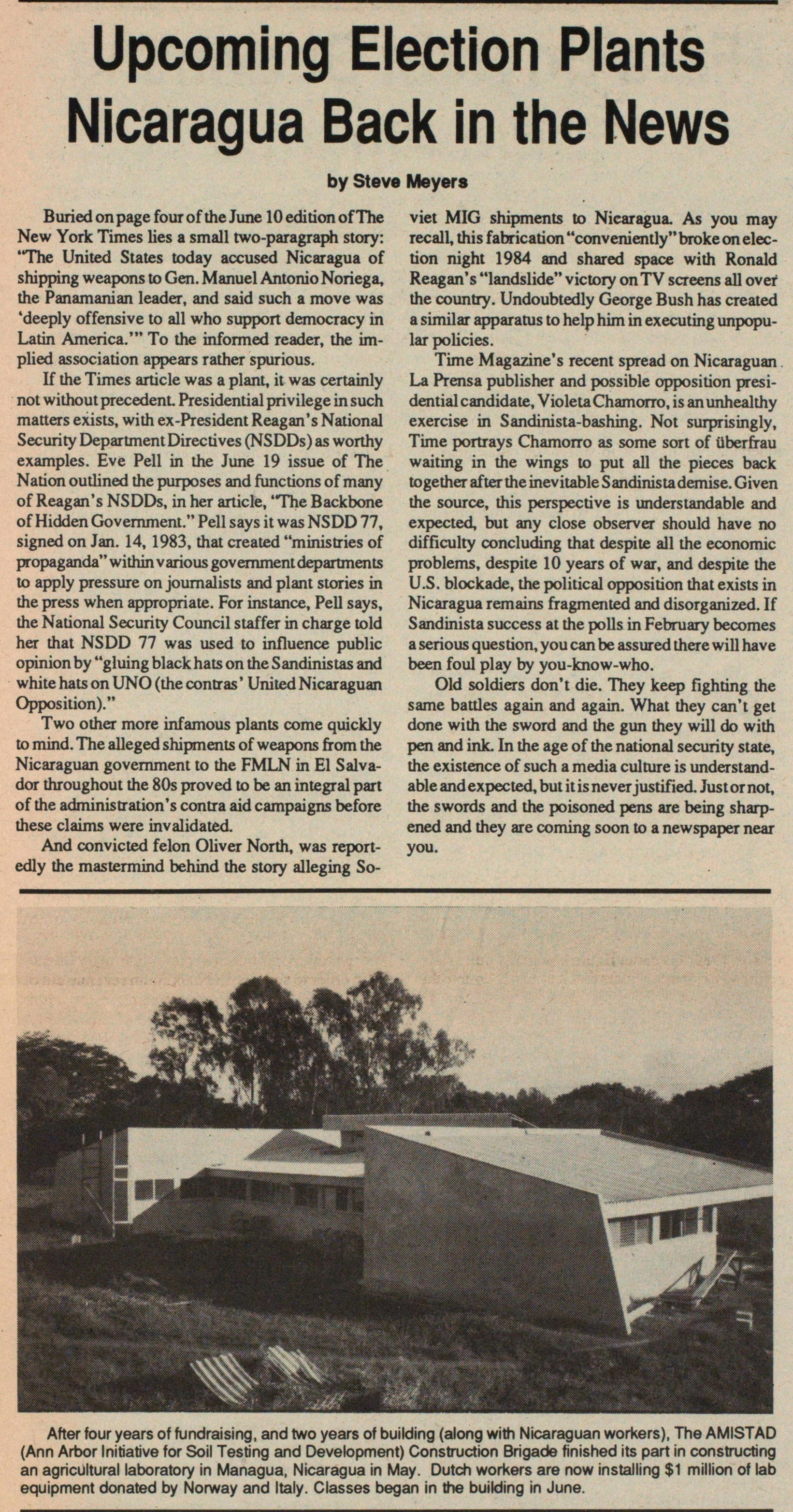 Buríed on page four of the June 10 edition of The New York Times lies a small two-paragraph story: "The United States today accused Nicaragua of shipping weapons to Gen. Manuel Antonio Noriega, the Panamanian leader, and said such a move was 'deeply offensive to all who support democracy in Latin America.'" To the informed reader, the implied association appears rather spurious. If the Times article was a plant, it was certainly not without precedent Presidential privilege in such matters exists, with ex -President Reagan 's National Security Department Directives (NSDDs) as worthy examples. Eve Peil in the June 19 issue of The Nation outlined the purposes and functions of man y of Reagan's NSDDs, in her article, "The Backbone of Hidden Government." Peil says it was NSDD 77, signed on Jan. 14, 1983, that created "ministries of propaganda" within various govemment departments to apply pressure on journalists and plant stories in the press when appropriate. For instance, Peil says, the National Security Council staffer in charge told her that NSDD 77 was used to influence public opinión by "gluing black hats on the S andinistas and white hats on UNO (the contras ' United Nicaraguan Opposition)." Two other more infamous plants come quickly to mind. The alleged shipments of weapons from the Nicaraguan govemment to the FMLN in El Salvador throughout the 80s proved to be an integral part of the administration's contra aid campaigns before these claims were invalidated. And convicted felon Oliver North, was reportedly the mastermind behind the story alleging viet MIG shipments to Nicaragua. As you may recall, this fabrication "conveniently" broke on election night 1984 and shared space with Ronald Reagan's "landslide" victory on TV screens all over the country. Undoubtedly George Bush has created a similar apparatus to help him in executing impopular policies. Time Magazine's recent spread on Nicaraguan La Prensa publisher and possible opposition presidential candidate, Violeta Chamorro, is an unhealthy exercise in Sandinista-bashing. Not surprisingly, Time portrays Chamorro as some sort of überfrau waiting in the wings to put all the pieces back together af ter the inevitable S andinista demise. Given the source, this perspective is understandable and expected, but any close observer should have no difficulty concluding that despite all the economie problems, despite 10 years of war, and despite the U.S. blockade, the political opposition that exists in Nicaragua remains fragmented and disorganized. If S andinista success at the polls in February becomes a serious question, you can be assured there wi 11 have been foul play by you-know-who. Old soldiers don't die. They keep fighting the same baúles again and again. What they can't get done with the sword and the gun they will do with pen and ink. In the age of the national security state, the existence of such a media culture is understandable and expected, but it is ne ver justified. Just or not, the swords and the poisoned pens are being sharpened and they are coming soon to a newspaper near you. After four years of fundraising , and two years of building (along witti Nicaraguan workers), The AMISTAD (Ann Arbor Initiative for Soil Testing and Development) Construction Brigade finished its part in constructing an agricultural laboratory in Managua, Nicaragua in May. Dutch workers are now installing $1 million of lab equipment donated by Norway and Italy. Classes began in the building in June.