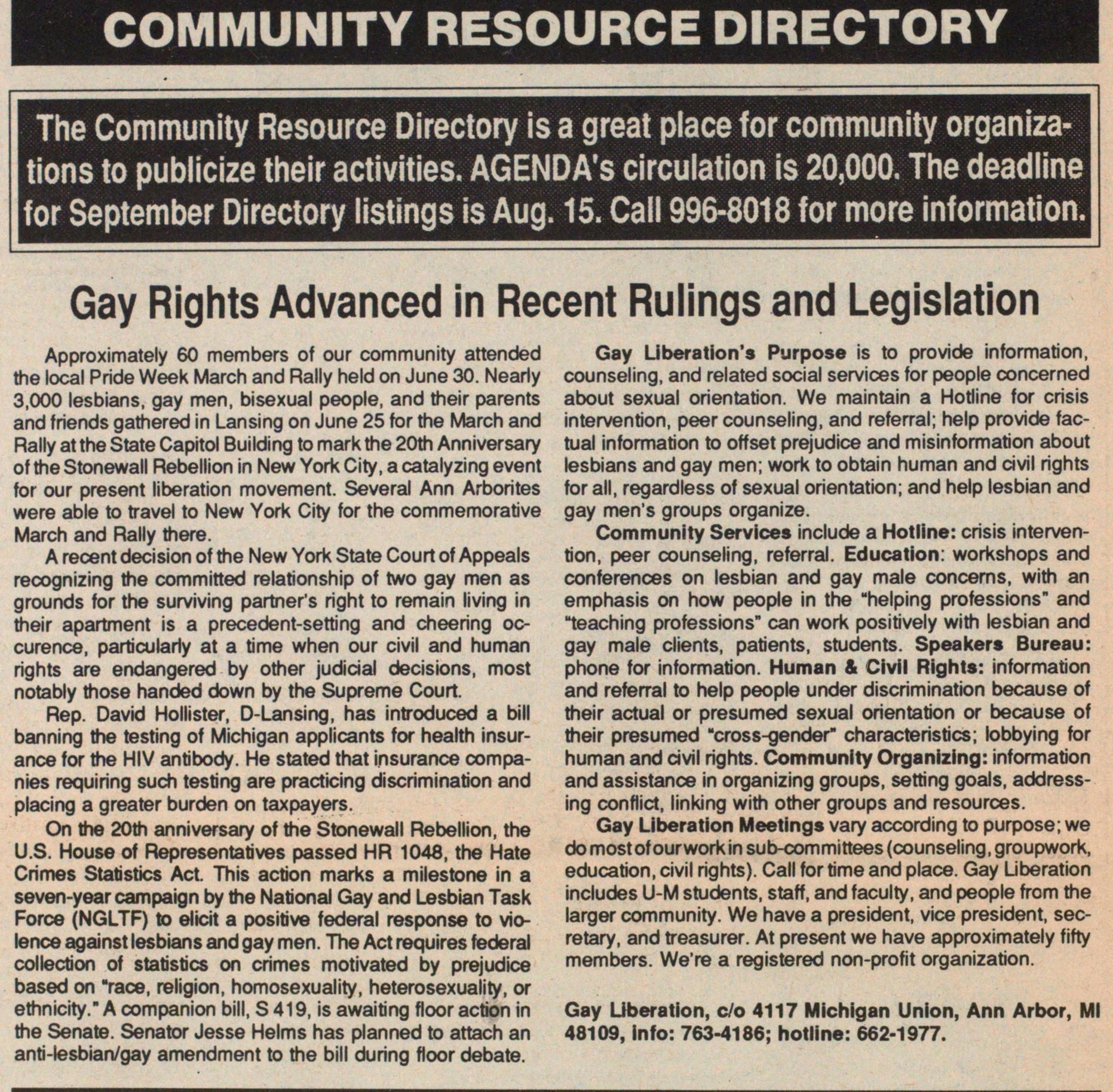 23 yí SO ÜTS Gay Rights Advanced in Recent Rulings and Legislation Approximately 60 members of our community attended the local Pride Week March and Rally held on June 30. Neariy 3,000 lesbians, gay men, bisexual people, and their parents and friends gathered in Lansing on June 25 for the March and Rally at the State Capítol Building to mark the 20th Anniversary of the Stonewall Rebellion in New York City, a catalyzing event for our present liberation movement. Several Ann Arborites were able to travel to New York City for the commemorative March and Rally there. A recent decisión of the New York State Court of Appeals recognizing the committed relationship of two gay men as grounds for the surviving partner's right to remain living in their apartment is a precedent-setting and cheering occurence, particularly at a time when our civil and human rights are endangered by other judicial decisions, most notably those handed down by the Supreme Court. Rep. David Hollister, D-Lansing, has introduced a bilí banning the testing of Michigan applicants for health insurance for the HIV antibody . He stated that insurance companies requiring such testing are practicing discrimination and placing a greater burden on taxpayers. On the 20th anniversary of the Stonewall Rebellion, the U.S. House of Representativos passed HR 1048, the Hate Crimes Statistics Act. This action marks a milestone in a seven-year campaign by the National Gay and Lesbian Task Force (NGLTF) to elicit a positivo federal response to violence against lesbians and gay men. The Act requires federal collection of statistics on crimes motivated by prejudice based on "race, religión, homosexuality, heterosexuality, or ethnicity." A companion bilí, S 419, is awaiting floor action in the Senate. Senator Jesse Helms has planned to attach an anti-iesbiangay amendment to the bill during floor debate. Gay Libera tion's Purpose is to pro vide information, counseling, and related social services for people concerned about sexual orientation. We maintain a Hotline for crisis intervention, peer counseling, and referral; help provide factual information to offset prejudice and misintormation about lesbians and gay men; work to obtain human and civil rights for all, regardless of sexual orientation; and help lesbian and gay men's groups organize. Community Services include a Hotline: crisis intervention, peer counseling, referral. Education: workshops and conferences on lesbian and gay male concerns, with an emphasis on how people in the "helping professions" and "teaching professions" can work positively with lesbian and gay male clients, patients, students. Speakers Bureau: phone for information. Human & Civil Rights: information and referral to help people under discrimination because of their actual or presumed sexual orientation or because of their presumed "cross-gender" characteristics; lobbying for human and civil rights. Community Organizing: information and assistance in organizing groups, setting goals, addressing conflict, linking with other groups and resources. Gay Liberation Meetings vary according to purpose; we do most of our work in sub-committees (counseling, groupwork, education, civil rights). Cali for time and place. Gay Liberation includes U-M students, staff, and faculty , and people from the larger community. We have a president, vice president, secretary, and treasurer. At present we have approximately fifty members. We're a registered non-profit organization. Gay Liberation, co 4117 Michigan Union, Ann Arbor, Ml 48109, info: 763-4186; hotline: 662-1977.