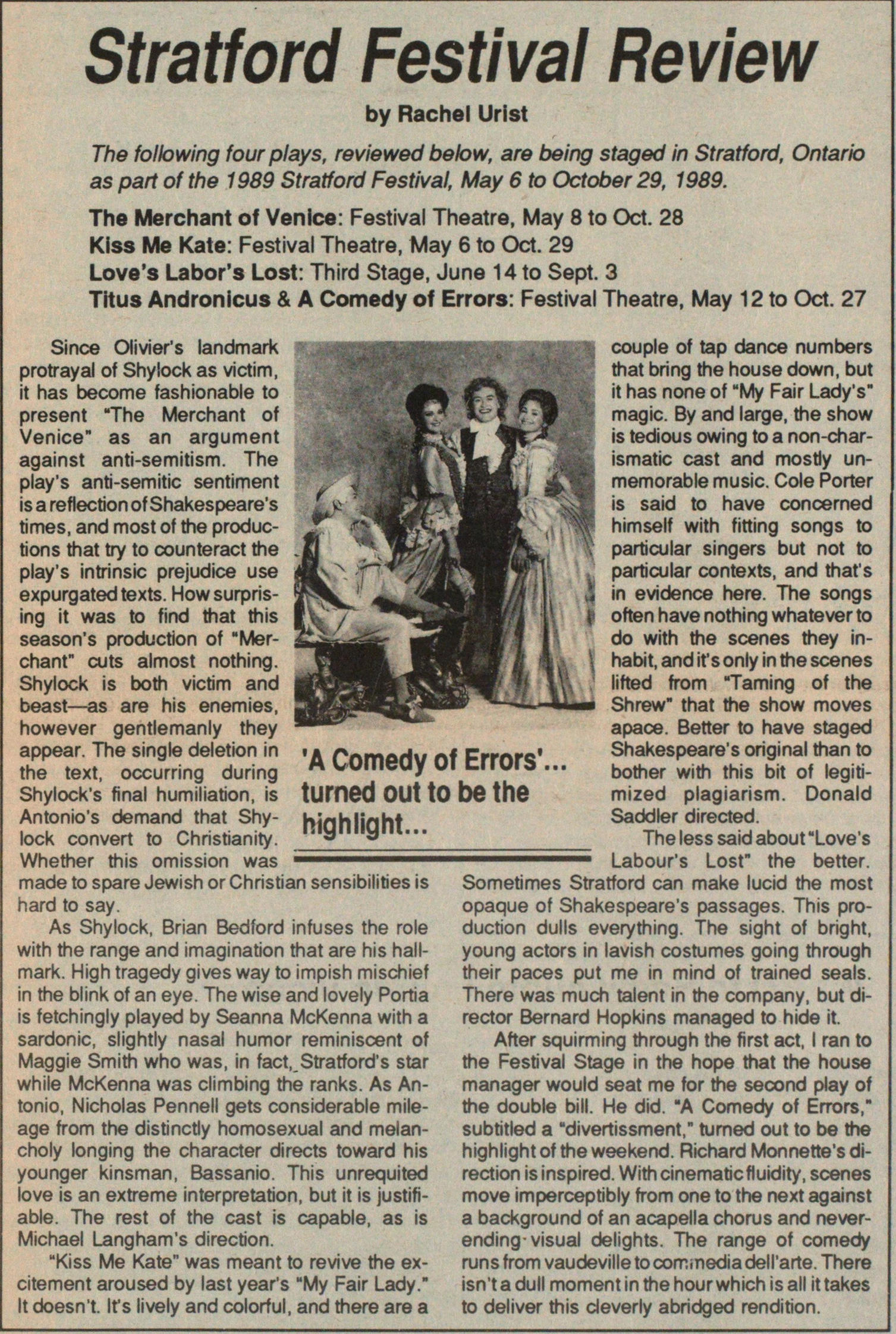 The following fourplays, reviewed bebw, are being staged in Stratford, Ontario as part of the 1989 Stratford Festival, May 6 to October29, 1989. The Merchant of Venice: Festival Theatre, May 8 to Oct. 28 Kiss Me Kate: Festival Theatre, May 6 to Oct. 29 Love's Labor's Lost: Third Stage, June 1 4 to Sept. 3 Titus Andronicus & A Comedy of Errors: Festival Theatre, May 12 to Oct. 27 Since Olivier's landmark protrayal of Shylock as victim, t has become fashionable to present "The Merchant of Venice" as an argument against anti-semitism. The play's anti-semitic sentiment is a reflection of Shakespeare's times, and most of the productions that try to counteract the play's intrinsic prejudice use expurgated texts. How surprising it was to find that this season's production of "Merchant" cuts almost nothing. Shylock is both victim and beast - as are his enemies, however gentlemanly they appear. The single deletion in the text, occurring during Shylock's final humiliation, is Antonio's demand that Shylock convert to Christianity. Whether this omission was made to spare Jewish or Christian sensibilities is hard to say. As Shylock, Brian Bedford infuses the role with the range and imagination that are his hallmark. High tragedy gives way to impish mischief n the blink of an eye. The wise and lovely Portia is fetchingly played by Seanna McKenna with a sardonio, slightly nasal humor reminiscent of Maggie Smith who was, in fact, Stratford's star while McKenna was climbing the ranks. As Antonio, Nicholas Pennell gets considerable mileage from the distinctly homosexual and melancholy longing the character di reets toward his younger kinsman, Bassanio. This unrequited love is an extreme interpretation, but it is justifiable. The rest of the cast s capable, as is Michael Langham's direction. "Kiss Me Kate" was meant to revive the excitement aroused by last year's "My Fair Lady." It doesn't. It's lively and colorful, and there are a couple of tap dance numbers that bring the house down, but t has none of "My Fair Lady's" magie. By and large, the show is tedious owing to a non-charismatic cast and mostly unmemorable music. Cole Porter is said to have concerned himself with fitting songs to particular singers but not to particular contexts, and that's in evtdence here. The songs often have nothing whatever to do with the scènes they inhabit, and it'sonly in the scènes lifted from "Taming of the Snrew" that the show moves apace. Better to have staged Shakespeare's original than to bother with this bit of legitimized plagiahsm. Donald Saddler directed. The less said about "Love's -■- ■""-"■■" Labour's Lost" the better. Sometimes Strafford can make lucid the most opaque of Shakespeare's passages. This production dulls everything. The sight of bright, young actors in lavish costumes going through their paces put me in mind of trained seals. There was much talent in the company, but director Bernard Hopkins managed to hide it. After squirming through the first act, I ran to the Festival Stage in the hope that the house manager would seat me for the second play of the doublé bill. He did. "A Comedy of Errors," subtitled a "divertissment," turned out to be the highlight of the weekend. Richard Monnette's direction is inspired. With cinematic fluidity, scènes move imperceptibly trom one to the next against a background of an acapella chorus and neverending- visual delights. The range of comedy runs from vaudeville to comnedia delParte. There isn'ta dull momentin the hourwhich is all ittakes to deliver this deverly abridged rendition.