The Space Movement And The Overview Effect 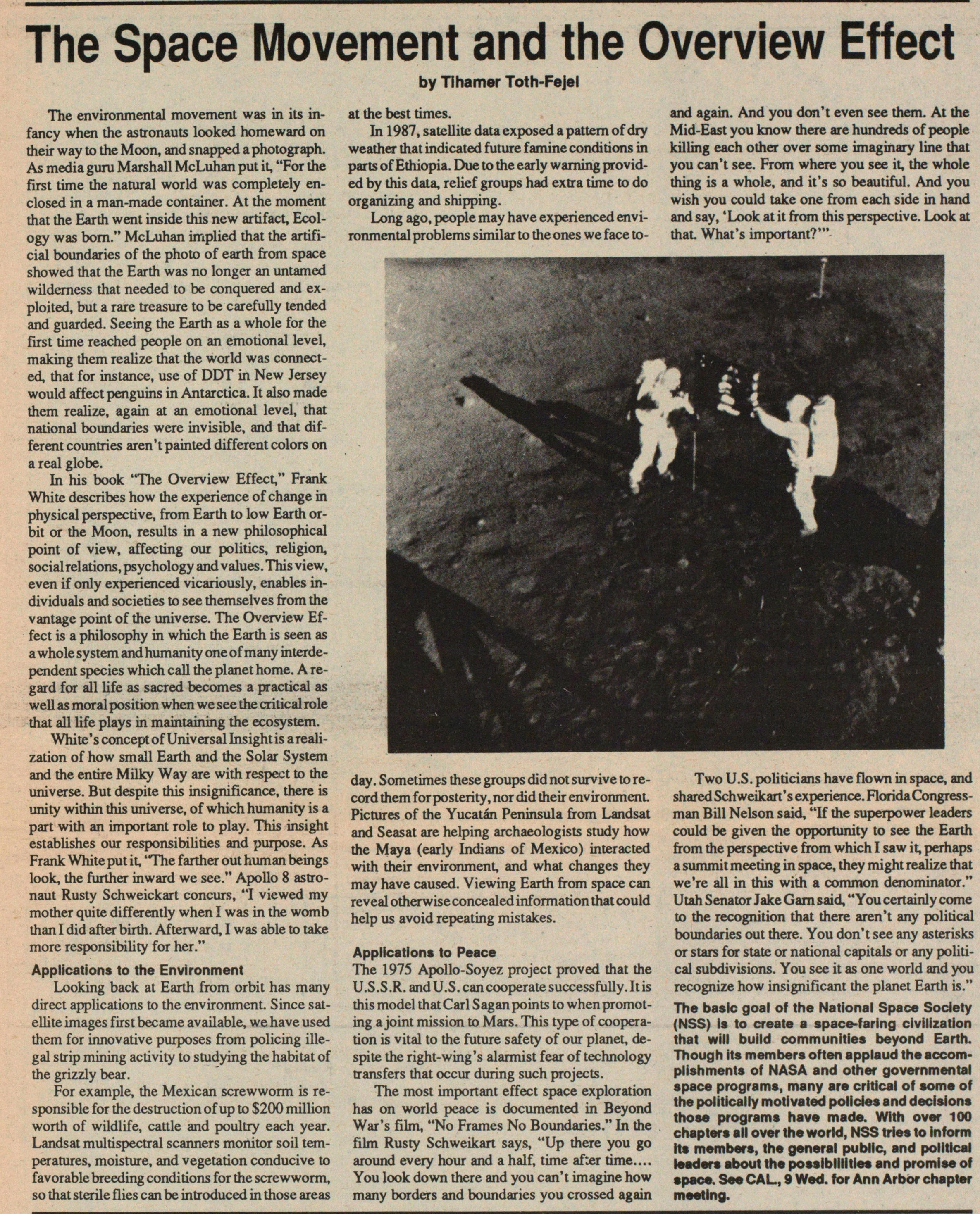 The environmental movement was in its infancy when the astronauts looked homeward on their way to the Moon, and snapped aphotograph. As media gum Marshall McLuhan put it, "For the first time the natural world was completely enclosed in a man-made container. At the moment that the Earth went inside this new artifact, Ecology was bom." McLuhan implied that the artificial boundaries of the photo of earth from space showed that the Earth was no longer an untamed wilderness that needed to be conquered and exploited, but a rare treasure to be carefully tended and guarded. Seeing the Earth as a whole for the first time reached people on an emotional level, making them realize that the world was connected, that for instance, use of DDT in New Jersey would affect penguins in Antarctica. It also made them realize, again at an emotional level, that national boundaries were invisible, and that different countries aren't painted different colors on a real globe. In his book "The Overview Effect," Frank White describes how the experience of change in physical perspective, from Earth to low Earth orbit or the Moon, results in a new philosophical point of view, affecting our politics, religión, social relations, psychology and values. This view, even if only experienced vicariously, enables individuals and societies to see themselves from the vantage point of the universe. The Overview Effect is a philosophy in which the Earth is seen as a whole system and humanity one of many interdependent species which cali the planet home. A regard for all life as sacred becomes a practical as well as moral position when we see the critical role that all life plays in maintaining the ecosystem. White's concept of Universal Insight is arealization of how small Earth and the Solar System and the entire Milky Way are with respect to the universe. But despite this insignificance, there is unity within this universe, of which humanity is a part with an important role to play. This insight establishes our responsibilities and purpose. As Frank White put it, "The farther out human beings look, the further inward we see." Apollo 8 astronaut Rusty Schweickart concurs, "I viewed my mother quite differently when I was in the womb than I did after birth. Af terward, I was able to take more responsibility for her." Applications to the Environment Looking back at Earth from orbit has many direct applications to the environment. Since satellite images first became available, we have used them for innovative purposes from policing illegal strip mining activity to studying the habitat of the grizzly bear. For example, the Mexican screwworm is responsible for the destruction of up to $200 million worth of wildlife, cattle and poultry each year. Landsat multispectral scanners momtor soil temperatures, moisture, and vegetation conducive to favorable breeding conditions for the screwworm, so that sterile flies can be introduced in those areas at the best times. In 1987, satellite data exposed a pattem of dry weather that indicated future f amine condi tions in parts of Ethiopia. Due to the early warning pro vided by this data, relief groups had extra time to do organizing and shipping. Long ago, people may have experienced environmental problems similar to the ones we face day . Sometimes these groups did not survive to record them forposterity, nor did their environment Pictures of the Yucatán Península from Landsat and Seasat are helping archaeologists study how the Maya (early idians of Mexico) interacted with their environment, and what changes they may have caused. Viewing Earth from space can reveal otherwise concealed information that could help us avoid repeating mistakes. Application to Peace The 1975 Apollo-Soyez project proved that the U.S.S.R.andU.S. cancooperatesuccessfully.lt is this model that Cari Sagan points to when promoting a joint mission to Mars. This type of cooperation is vital to the future safety of our planet, despite the right-wing's alarmist fear of technology transfers that occur during such projects. The most important effect space exploration has on world peace is documented in Beyond War's film, "No Frames No Boundaries." In the film Rusty Schweikart says, "Up there you go around every hour and a half, time after time.... You look down there and you can' t imagine how many borders and boundaries you crossed again and again. And you don't even see them. At the Mid-East you know there are hundreds of people killing each other over some imaginary line that you can't see. From where you see it, the whole thing is a whole, and it's so beautiful. And you wish you could take one from each side in hand and say, 'Look at it from this perspective. Look at that. What's important?'" Two U.S. politicians have flown in space, and shared Schweíkart's experience. Florida Congressman Bill Nelson said, "If the superpower leaders could be given the opportunity to see the Earth firom the perspective from which I saw it, perhaps a summit meeting in space, they might realize that we 're all in this with a common denominator." Utah Senator Jake Gam said, " You certainly come to the recognition that there aren't any political boundaries out there. You don' t see any asterisks or stars for state or national capitals or any political subdivisions. You see it as one world and you recognize how insignificant the planet Earth is." The baslc goal of the National Space Society (NSS) I to créate a space-faring civilization that will build communities beyond Earth. Though lts mem bers of ten applaud the accomplishments of NASA and other governmental space programs, many are crilical of som of the politically motiva ted policies and declsions those programs have made. With over 100 chapters all over the world, NSS tries to inform lts members, the general public, and political leaders about the possibllllties and promise of space. See CAL, 9 Wed. for Ann Arbor chapter meeting.