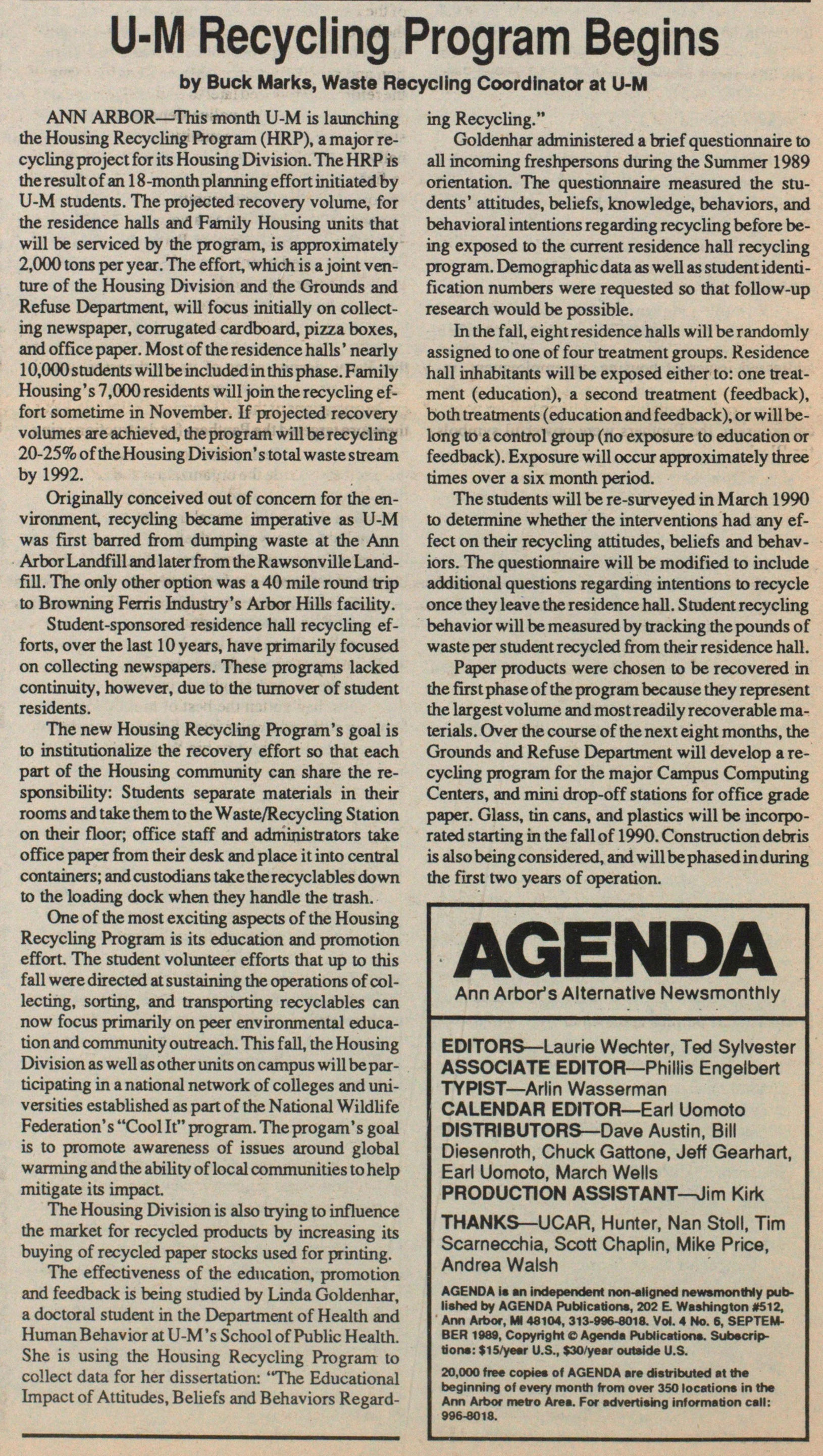 ANN ARBOR- This month U-M is launching the Housing Recycling Program (HRP), a major recycling project for its Housing Division. The HRP is the result of an 1 8-month planning effort initiated by U-M students. The projected recovery volume, for the residence halls and Family Housing units that will be serviced by the program, is approximately 2,000 tons per year. The effort, which is a joint venture of the Housing Division and the Grounds and Refuse Department, will focus initially on collecting newspaper, corrugated cardboard, pizza boxes, and office paper. Most of the residence halls' nearly 10,000 students will be included in this phase. Family Housing's 7,000 residents will join the recycling effort sometime in November. If projected recovery volumes are achieved, the program will be recycling 20-25% of the Housing Division's total waste stream by 1992.

Originally conceived out of concern for the environment, recycling became imperative as U-M was first barred from dumping waste at the Ann Arbor Landfill and later from the Rawsonville Landfill. The only other option was a 40 mile round trip to Browning Ferris Industry's Arbor Hills facility. Student-sponsored residence hall recycling efforts, over the last 10 years, have primarily focused on collecting newspapers. These programs lacked continuity, however, due to the tumover of student residents.

The new Housing Recycling Program's goal is to institutionalize the recovery effort so that each part of the Housing community can share the responsibility: Students separate materials in their rooms and take them to the WasteRecycling Station on their floor; office staff and administrators take office paper from their desk and place it into central containers; and custodians take the recyclables down to the loading doek when they handle the trash.

One of the most exciting aspee ts of the Housing Recycling Program is its education and promotion effort. The student volunteer efforts that up to this fall were directed at sustaining the operations of collecting, sorting, and transporting recyclables can now focus primarily on peer environmental education and community outreach. This fall, the Housing División as well as other units on campus will be participating in a national network of colleges and universities established as part of the National Wildlife Federation's "Cool It" program. The progam's goal is to promote awareness of issues around global warming and the ability of local communities to help mitígate its impact.

The Housing Division is also trying to influence the market for recycled products by increasing its buying of recycled paper stocks used for printing.

The effectiveness of the education, promotion and feedback is being studied by Linda Goldenhar, a doctoral student in the Department of Health and Human Behavior at U-M 's School of Public Health. She is using the Housing Recycling Program to collect data for her dissertalion: "The Educational Impact of Attitudes, Beliefs and Behaviors Regarding Recycling."

Goldenhar administered a brief questionnaire to all incoming freshpersons during the Summer 1989 orientation. The questionnaire measured the students' attitudes, beliefs, knowledge, behaviors, and behavioral intentions regarding recycling before being exposed to the current residence hall recycling program. Demographic data as well as student identi - fication numbers were requested so that follow-up research would be possible.

In the fall, eight residence halls will be randomly assigned to one of four treatment groups. Residence hall inhabitants will be exposed either to: one treatment (education), a second treatment (feedback), both treatments (education and feedback), or will belong to a control group (no exposure to education or feedback). Exposure will occur approximately three times over a six month period.

The students will be re-surveyed in March 1990 to determine whether the interventions had any effect on their recycling attitudes, beliefs and behaviors. The questionnaire will be modified to include additional questions regarding intentions to recycle once they leave the residence hall. Student recycling behavior will be measured by tracking the pounds of waste per student recycled from their residence hall.

Paper producís were chosen to be recovered in the fïrst phase of the program because they represent the largest volume and mostreadily recoverable materials. Over the course of the next eight months, the Grounds and Refuse Department will develop a recycling program for the major Campus Computing Centers, and mini drop-off stations for office grade paper. Glass, tin cans, and plastics will be incorporated starting in the fall of 1990. Construction debris is also being considered, and will be phased in during the first two years of operation.