Afro-nicaraguan Reggae Comes To A2 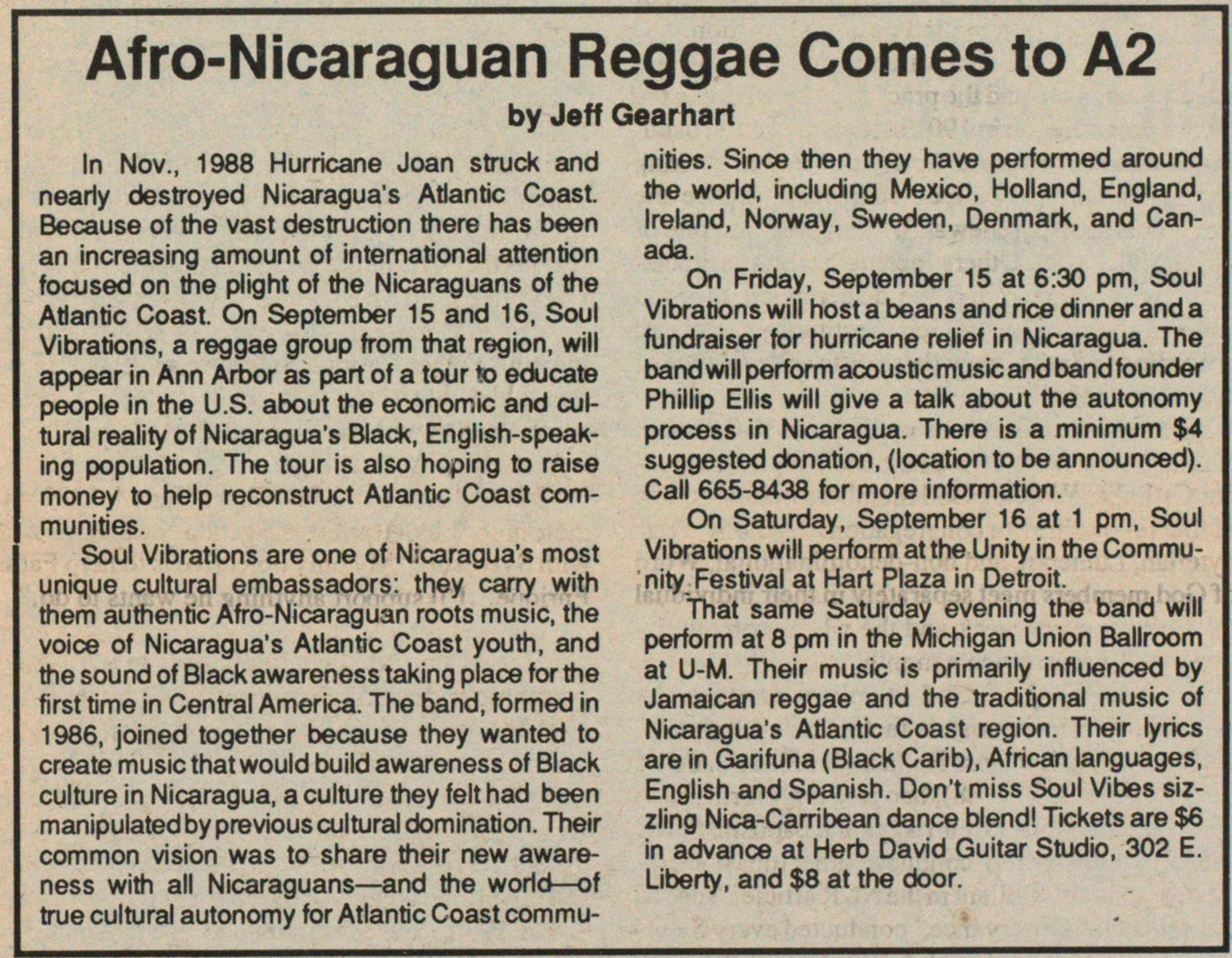 In Nov., 1988 Hurricane Joan struck and nearly destroyed Nicaraguas Atlantic Coast. Because of the vast destruction there has been an increasing amount of international attention focused on the plight of the Nicaraguans of the Atlantic Coast. On September 15 and 16, Soul Vibrations, a reggae group from that región, will appear in Ann Arbor as part of a tour 'o edúcate people in the U.S. about the economie and cultural reality of Nicaragua's Black, English-speaking population. The tour is also hoping to raise money to help reconstruct Atlantic Coast communities. Soul Vibrations are one of Nicaragua's most unique cultural embassadors: they carry with them authentic Afro-Nicaraguan roots music, the voice of Nicaragua's Atlantic Coast youth, and the sound of Black awareness taking place for the first time in Central America. The band, formed in 1986, joined together because they wanted to créate music that would build awareness of Black culture in Nicaragua, a culture they feit had been manipulated by previous cultural domination . Their common visión was to share their new awareness with all Nicaraguans - and the world - of true cultural autonomy for Atlantic Coast nities. Since trien they have performed around the worid, ncluding Mexico, Holland, England, Ireland, Norway, Sweden, Denmark, and Canada. On Friday, September 15 at 6:30 pm, Soul Vibrations wil) host a beans and rice dinner and a fundraiser for hurricane relief in Nicaragua. The band will perform acoustic music and band founder Phillip Ellis will give a talk about the autonomy process in Nicaragua. There is a minimum $4 suggested donation, (locatíon to be announced). Cali 665-8438 for more information. On Saturday, September 16 at 1 pm, Soul Vibrations will perform at the Unity in the Community Festival at Hart Plaza in Detroit. That same Saturday evening the band will perform at 8 pm in the Michigan Union Ballroom at U-M. Their music is primarily influenced by Jamaican reggae and the traditional music of Nicaraguas Atlantic Coast región. Their lyrics are in Garifuna (Black Carib), African languages, English and Spanish. Don't miss Soul Vibes sizzling Nica-Carribean dance blend! Tickets are $6 in advance at Herb David Guitar Studio, 302 E. Liberty, and $8 at the door.