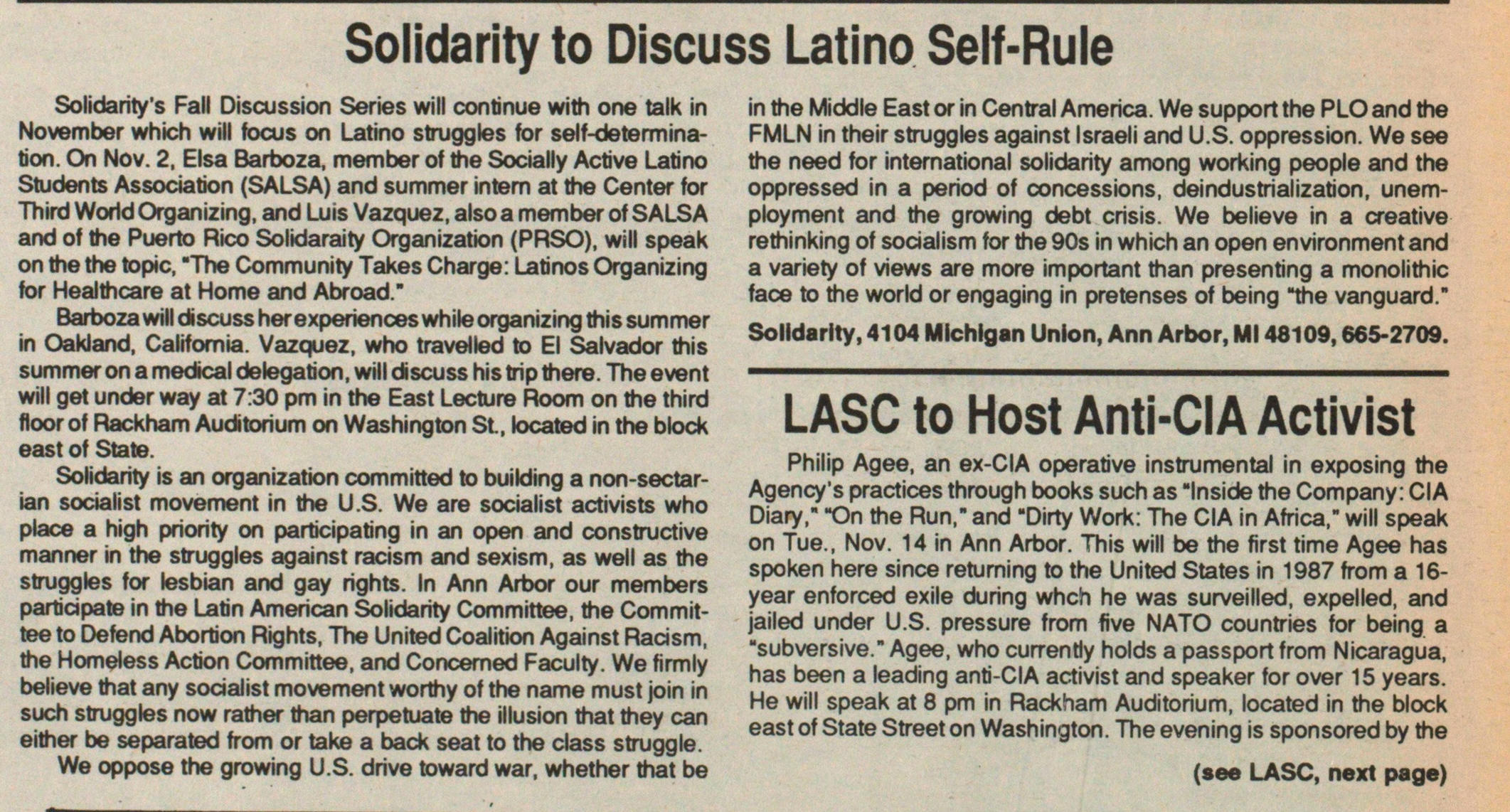 Solidaríty's Fall Discussion Series will continue with one talk in November which will focus on Latino struggles for sel f-de term ination. On Nov. 2, Elsa Barboza, member of the Socially Active Latino Students Association (SALSA) and summer intern at the Center for Third World Organizing, and Luis Vázquez, also a member of SALSA and of the Puerto Rico Solidaraity Organization (PRSO), will speak on the the topic, "The Community Takes Charge: Latinos Organizing for Healthcare at Home and Abroad " Barboza will discuss her expeñen ces while organizing this summer in Oakland, California. Vázquez, who travelled to El Salvador this summer on a medical delegation, will discuss his trip there. The event will get under way at 7:30 pm in the East Lecture Room on the third tloor of Rackham Auditorium on Washington St, located in the block east of State. Solidarity is an organization committed to building a non-sectarian socialist movement in the U.S. We are socialist activists who place a high priority on participating in an open and constructive manner in the struggles against racism and sexism, as well as the struggles for lesbian and gay nghts In Ann Arbor our members participate in the Latín American Solidarity Committee, the Committee to Defend Abortion Rights, The United Coalition Against Racism, the Homeless Action Committee, and Concerned Faculty. We firrnly believe that any socialist movement worthy of the name must join in such struggles now rather than perpetúate the Ilusión that they can either be separated from or take a back seat to the class struggle. We oppose the growing U.S. drive toward war, whether that be n the Middle East or n Central America. We support the PLO and the FMLN n their struggles agamst Israeli and U.S. oppression. We see the need for international solidarity among working people and the oppressed in a period of concessions, deindustrialization, unemployment and the growing debt crisis. We believe in a creative rethinking of socialism for the 90s in which an open environment and a variety of views are more important than presenting a monolithic face to the world or engaging in pretenses of being "the vanguard." Solidarity, 4104 Michigan Union, Ann Arbor, Ml 48109, 665-2709.