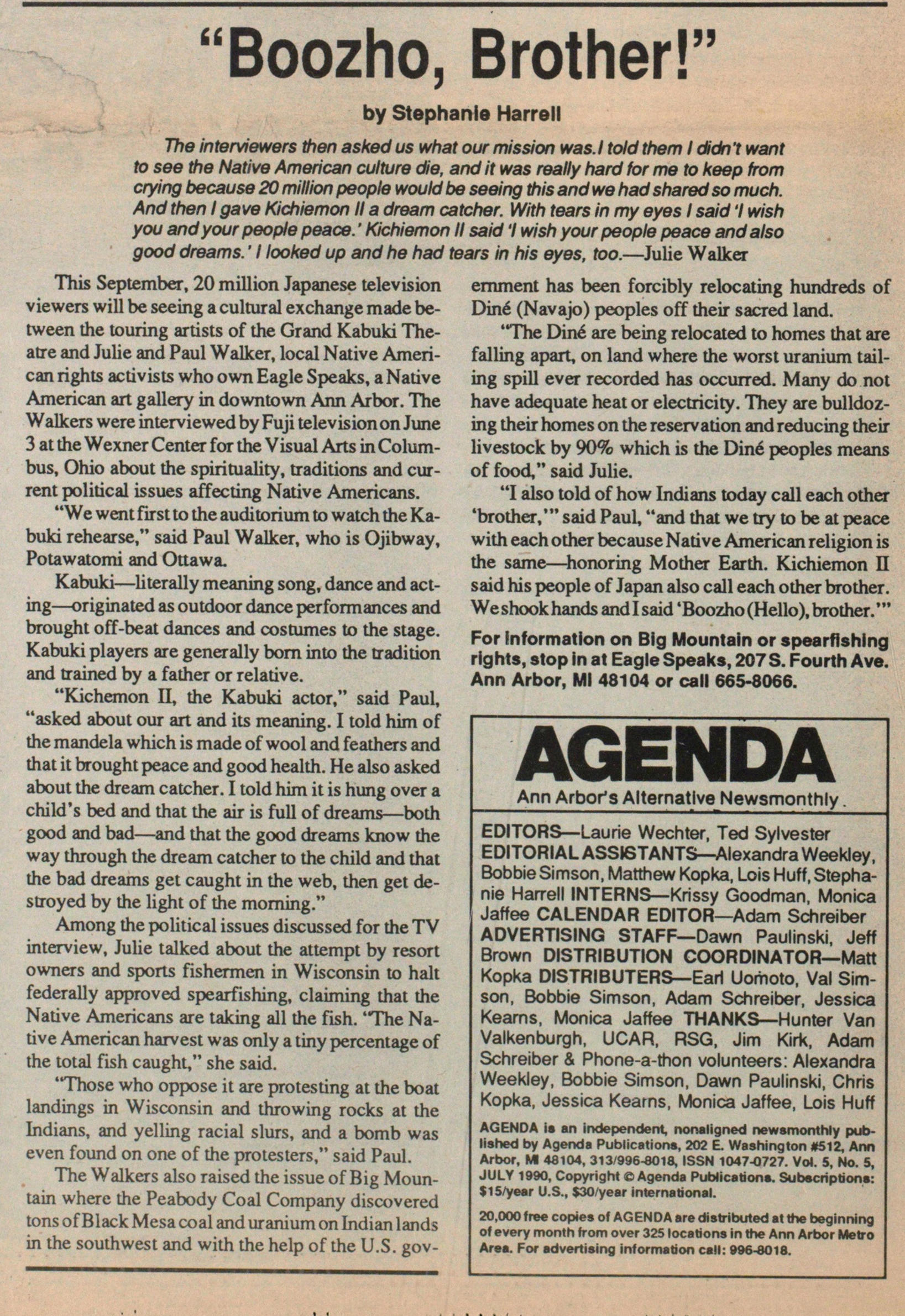 The interviewers then asked us what our mission was. I told them I didn 't want to see the Native American culture de, and it was really hard tor me to keep trom crying because 20 million people would be seeing this and we had sha red so much. And then I gave Kichiemon II a dream catcher. With tears in my eyes I said 'I wish y ou and y our people peace.' Kichiemon II said 'I wish y our people peace andalso good dreams. ' I looked up and he had tears in his eyes, too. - Julie Walker This September, 20 million Japanese televisión viewers will be seeing a cultural exchange made between the touring artists of the Grand Kabuki Theatre and Julie and Paul Walker, local Native American rights activists who own Eagle Spe aks, a Native American art gallery in downtown Ann Arbor. The Walkers were interviewed by Fuji televisión on June 3 at the Wexner Center for the Visual Arts in Columbus, Ohio about the spirituality, traditions and current political issues affecting Native Americans. "We went fïrst to the auditorium to watch the Kabuki rehearse," said Paul Walker, who is Ojibway, Potawatomi and Ottawa. Kabuki - literally meaning song, dance and acting - originated as outdoor dance performances and brought off -beat dances and costumes to the stage. Kabuki players are generally born into the tradition and trained by a father or relative. "Kichemon II, the Kabuki actor," said Paul, "asked about our art and its meaning. I told him of the mándela which is made of wool and feathers and that it brought peace and good health. He also asked about the dream catcher. I told him it is hung over a child's bed and that the air is full of dreams - both good and bad - and that the good dreams know the way through the dream catcher to the child and that the bad dreams get caught in the web, then get destroyed by the light of the moming." Among the political issues discussed for the TV interview, Julie talked about the attempt by resort owners and sports fishermen in Wisconsin to halt federally approved spearfishing, claiming that the Native Americans are taking all the fish. "The Native American harvest was only a tiny percentage of the total fish caught," she said. "Those who oppose it are protesting at the boat landings in Wisconsin and throwing rocks at the Indians, and yelling racial slurs, and a bomb was even found on one of the prolesters," said Paul. The Walkers also raised the issue of Big Mountain where the Peabody Coal Company discovered tons of Black Mesa coal and uranium on Indian lands in the southwest and with the help of the U.S. ernment has been forcibly relocating hundreds of Diné (Navajo) peoples off their sacred land. "The Diné are being relocated to homes that are falling apart, on land where the worst uranium tailing spill ever recorded has occurred. Many do not have adequate heat or electricity. They are bulldozing their homes on the reservation and reducing their livestock by 90% which is the Diné peoples means of food," said Julie. "I also told of how Indians today cali each other 'brother,'" said Paul, "and that we try to be at peace with each other because Native American religión is the same - honoring Mother Earth. Kichiemon II said nis people of Japan also cali each other brother. Weshookhands andlsaid 'Boozho (Helio), brother.'" For Information on Big Mountain or spearfishlng rights, stop in at Eagle Speaks, 207 S. Fourth Ave. Ann Arbor, Ml 48104 or cali 665-8066.