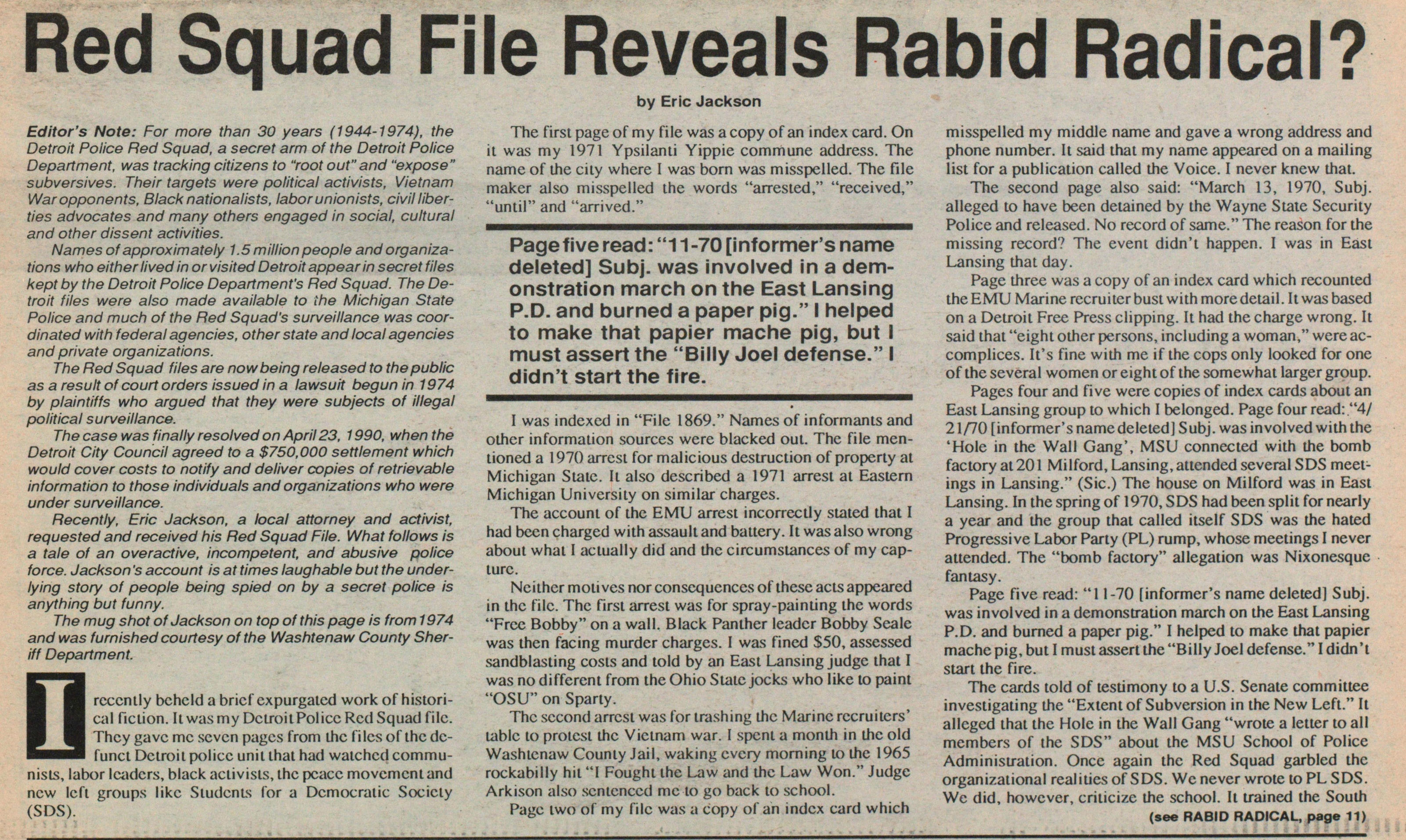 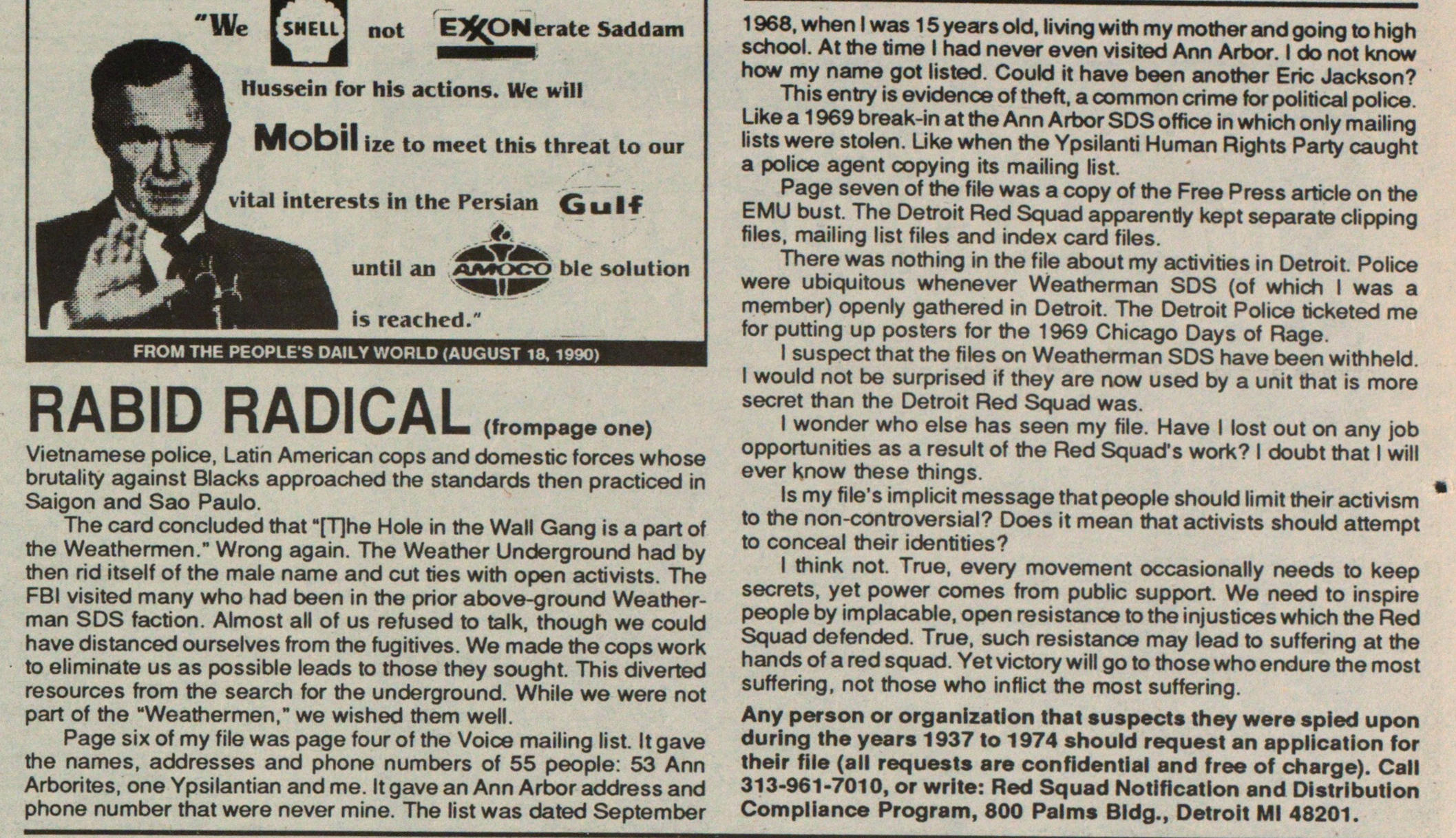 Editor's Note: For more than 30 years (1944-1974), the Detroit Police Red Squad, a secret arm of the Detroit Police Department, was tracking citizens to "root out" and "expose" subversives. Their targets were political activists, Vietnam War opponents, Black nationalists, labor unionists, civil liberties advocates and many others engaged in social, cultural and other dissent activities.

Names of approximately 1.5 million people and organizations who either lived in or visited Detroit appear in secret files kept by the Detroit Police Department's Red Squad. The Detroit files were also made available to the Michigan State Police and much of the Red Squad's surveillance was coordinated with federal agencies, other state and local agencies and private organizations.

The Red Squad files are now being released to the public as a result of court orders issued in a lawsuit begun in 1974 by plaintiffs who argued that they were subjects of illegal political surveillance.

The case was finally resolved on April 23, 1990, when the Detroit City Council agreed to a $750,000 settlement which would cover costs to notify and deliver copies of retrievable information to those individuals and organizations who were under surveillance.

Recently, Eric Jackson, a local attorney and activist, requested and received his Red Squad File. What follows is a tale of an overactive, incompetent, and abusive police force. Jackson's account is at times laughable but the underlying story of people being spied on by a secret police is anything but funny.

The mug shot of Jackson on top of this page is from 1974 and was furnished courtesy of the Washtenaw County Sheriff Department.

I recently beheld a brief expurgated work of historical fiction. It was my Detroit Police Red Squad file. They gave me seven pages from the files of the defunct Detroit police unit that had watched communists, labor leaders, black activists, the peace movement and new left groups like Students for a Democratic Society (SDS).

The first page of my file was a copy of an index card. On it was my 1971 Ypsilanti Yippie commune address. The name of the city where I was bom was misspelled. The file maker also misspelled the words "arrested," "received," "until" and "arrived."

I was indexed in "File 1869." Names of informants and other information sources were blacked out. The file mentioned a 1970 arrest for malicious destruction of property at Michigan State. It also described a 1971 arrest at Eastern Michigan University on similar charges.

The account of the EMU arrest incorrectly stated that I had been charged with assault and battery. It was also wrong about what I actually did and the circumstances of my capture.

Neither motives nor consequences of these acts appeared in the file. The first arrest was for spray-painting the words "Free Bobby" on a wall. Black Panther leader Bobby Seale was then facing murder charges. I was fined $50, assessed sandblasting costs and told by an East Lansing judge that I was no different from the Ohio State jocks who like to paint "OSU" on Sparty.

The second arrest was for trashing the Marine recruiters' table to protest the Vietnam war. I spent a month in the old Washtenaw County Jail, waking every morning to the 1965 rockabilly hit "I Fought the Law and the Law Won." Judge Arkison also sentenced me to go back lo school.

Page two of my file was a copy of an index card which misspelled my middle name and gave a wrong address and phone number. It said that my name appeared on a mailing list for a publication called the Voice. I never knew that.

The second page also said: "March 13, 1970, Subj. alleged to have been detained by the Wayne State Security Police and released. No record of same." The reason for the missing record? The event didn't happen. I was in East Lansing that day.

Page three was a copy of an index card which recounted the EMU Marine recruiter bust with more detail. It was based on a Detroit Free Press clipping. It had the charge wrong. It said that "eight other persons, including a woman," were accomplices. It's fine with me if the cops only looked for one of the several women or eight of the somewhat larger group.

Pages four and five were copies of index cards about an East Lansing group to which I belonged. Page four read: "4/21/70 [informer's name deleted] Subj. was involved with the 'Hole in the Wall Gang', MSU connected with the bomb factory at 201 Milford, Lansing, attended several SDS meetings in Lansing." (Sic.) The house on Milford was in East Lansing. In the spring of 1970, SDS had been split for nearly a year and the group that called itself SDS was the hated Progressive Labor Party (PL) rump, whose meetings I never attended. The "bomb factory" allegation was Nixonesque fantasy.

Page five read: "11-70 [informer's name deleted] Subj. was involved in a demonstration march on the East Lansing P.D. and burned a paper pig." I helped to make that papier mache pig, but I must assert the "Billy Joel defense." I didn't start the fire.

The cards told of testimony to a U.S. Senate committee investigating the "Extent of Subversion in the New Left." It alleged that the Hole in the Wall Gang "wrote a letter to all members of the SDS" about the MSU School of Police Administration. Once again the Red Squad garbled the organizational realities of SDS. We never wrote to PL SDS. We did, howcver, criticize the school. It trained the South
(see RABID RADICAL, page 11)

Page five read : "11-70 [informer's name deleted] Subj. was involved in a demonstration march on the East Lansing P.D. and burned a paper pig." I helped to make that papier mache pig, but I must assert the "Billy Joel defense." I didn't start the fire.

RABID RADICAL (frompage one)
Vietnamese police, Latin American cops and domestic forces whose brutality against Blacks approached the standards then practiced in Saigon and Sao Paulo.

The card concluded that "[T]he Hole in the Wall Gang is a part of the Weathermen." Wrong again. The Weather Underground had by then rid itself of the male name and cut ties with open activists. The FBI visited many who had been in the prior above-ground Weatherman SDS faction. Almost all of us refused to talk, though we could have distanced ourselves from the fugitives. We made the cops work to eliminate us as possible leads to those they sought. This diverted resources from the search for the underground. While we were not part of the "Weathermen," we wished them well.

Page six of my file was page four of the Voice mailing list. It gave the names, addresses and phone numbers of 55 people: 53 Ann Arborites, one Ypsilantian and me. It gave an Ann Arbor address and phone number that were never mine. The list was dated September 1968, when I was 15 years old, living with my mother and going to high school. At the time I had never even visited Ann Arbor. I do not know how my name got listed. Could it have been another Eric Jackson?

This entry is evidence of theft, a common crime for political police. Like a 1969 break-in at the Ann Arbor SDS office in which only mailing lists were stolen. Like when the Ypsilanti Human Rights Party caught a police agent copying its mailing list.

Page seven of the file was a copy of the Free Press article on the EMU bust. The Detroit Red Squad apparently kept separate clipping files, mailing list files and index card files.

There was nothing in the file about my activities in Detroit. Police were ubiquitous whenever Weatherman SDS (of which I was a member) openly gathered in Detroit. The Detroit Police ticketed me for putting up posters for the 1969 Chicago Days of Rage.

I suspect that the files on Weatherman SDS have been withheld. I would not be surprised if they are now used by a unit that is more secret than the Detroit Red Squad was.

I wonder who else has seen my file. Have I lost out on any job opportunities as a result of the Red Squad's work? I doubt that I will ever know these things.

Is my file's implicit message that people should limit their activism to the non-controversial? Does it mean that activists should attempt to conceal their identities?

I think not. True, every movement occasionally needs to keep secrets, yet power comes from public support. We need to inspire people by implacable, open resistance to the injustices which the Red Squad defended. True, such resistance may lead to suffering at the hands of a red squad. Yet victory will go to those who endure the most suffering, not those who inflict the most suffering.

Any person or organization that suspects they were spied upon during the years 1937 to 1974 should request an application for their file (all requests are confidential and free of charge). Call 313-961-7010, or write: Red Squad Notificatlon and Distribution Compliance Program, 800 Palms Bldg., Detroit MI 48201.