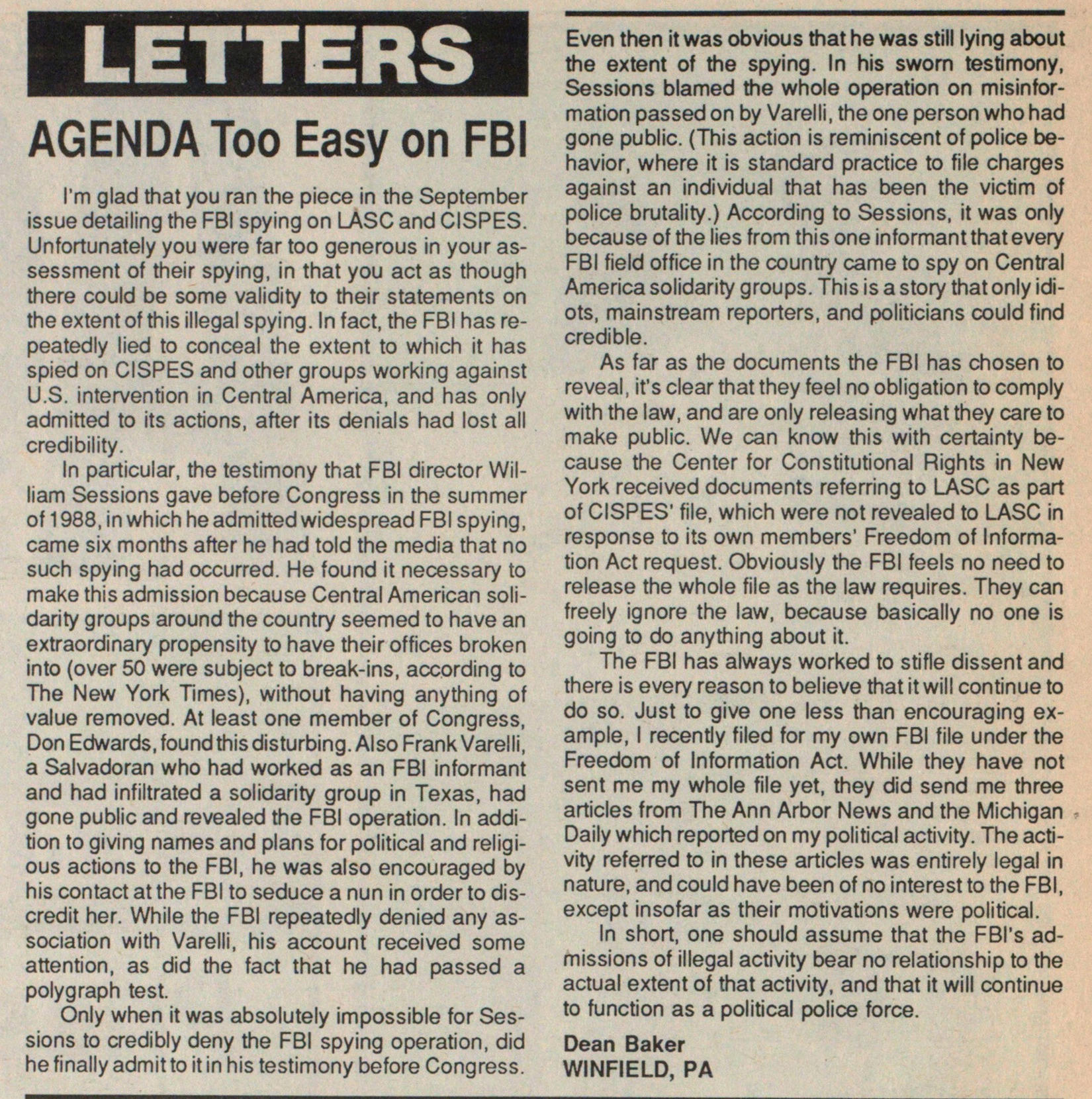 l'm glad that you ran the piece in the September issue detailing the FBI spying on LASC and CISPES. Unfortunately you were far too generous n your assessment of their spying, in that you act as though there could be some validity to their statements on the extent of this illegal spying. In fact, the FBI has repeatedly lied to conceal the extent to which it has spied on CISPES and other groups working against U.S. intervention in Central America, and has only admitted to its actions, after its denials had lost all credibility. In particular, the testimony that FBI director William Sessions gave before Congress in the summer of 1988, in which he admitted widespread FBI spying, carne six months after he had told the media that no such spying had occurred. He found it necessary to make this admission because Central American solidarity groups around the country seemed to have an extraordinary propensity to have their offices braken into (over 50 were subject to break-ins, according to The New York Times), without having anything of valué removed. At least one member of Congress, Don Edwards, found this disturbing. Also Frank Varelli, a Salvadoran who had worked as an FBI informant and had infiltrated a solidarity group in Texas, had gone public and revealed the FBI operation. In addition to giving names and plans for political and religious actions to the FBI, he was also encouraged by his contact at the FBI to seduce a nun in order to discredit her. While the FBI repeatedly denied any association with Varelli, his account received some attention, as did the fact that he had passed a polygraph test. Only when it was absolutely impossible for Sessions to credibly deny the FBI spying operation, did hefinallyadmittoit in his testimony before Congress. Even then it was obvious that he was still lying about the extent of the spying. In his sworn testimony, Sessions blamed the whole operation on misinformation passed on by Varelli, the one person who had gone public. (This action s reminiscent of pólice behavior, where it is standard practice to file charges against an individual that has been the victim of pólice brutality.) According to Sessions, it was only because of the lies from this one informant that every FBI field office in the country carne to spy on Central America solidarity groups. This is a story that only idiots, mainstream reporters, and politicians could find credible. As far as the documents the FBI has chosen to reveal, it's clear that they feel no obligation to comply with the law, and are only releasing what they care to make public. We can know this with certainty because the Center for Constitutional Rights in New York received documents referring to LASC as part of CISPES' file, which were not revealed to LASC in response to its own members' Freedom of Information Act request. Obviously the FBI feels no need to release the whole file as the law requires. They can freely ignore the law, because basically no one is going to do anything about it. The FBI has always worked to stifle dissent and there is every reason to believe that it will continue to do so. Just to give one less than encouraging example, I recently filed for my own FBI file under the Freedom of Information Act. While they have not sent me my whole file yet, they did send me three articles from The Ann Arbor News and the Michigan Daily which reported on my political activity. The activity referred to in these articles was entirely legal in nature, and could have been of no interest to the FBI, except insofar as their motivations were political. In short, one should assume that the FBI's admissions of Ilegal activity bear no relationship to the actual extent of that activity, and that it will continue to function as a political pólice forcé.