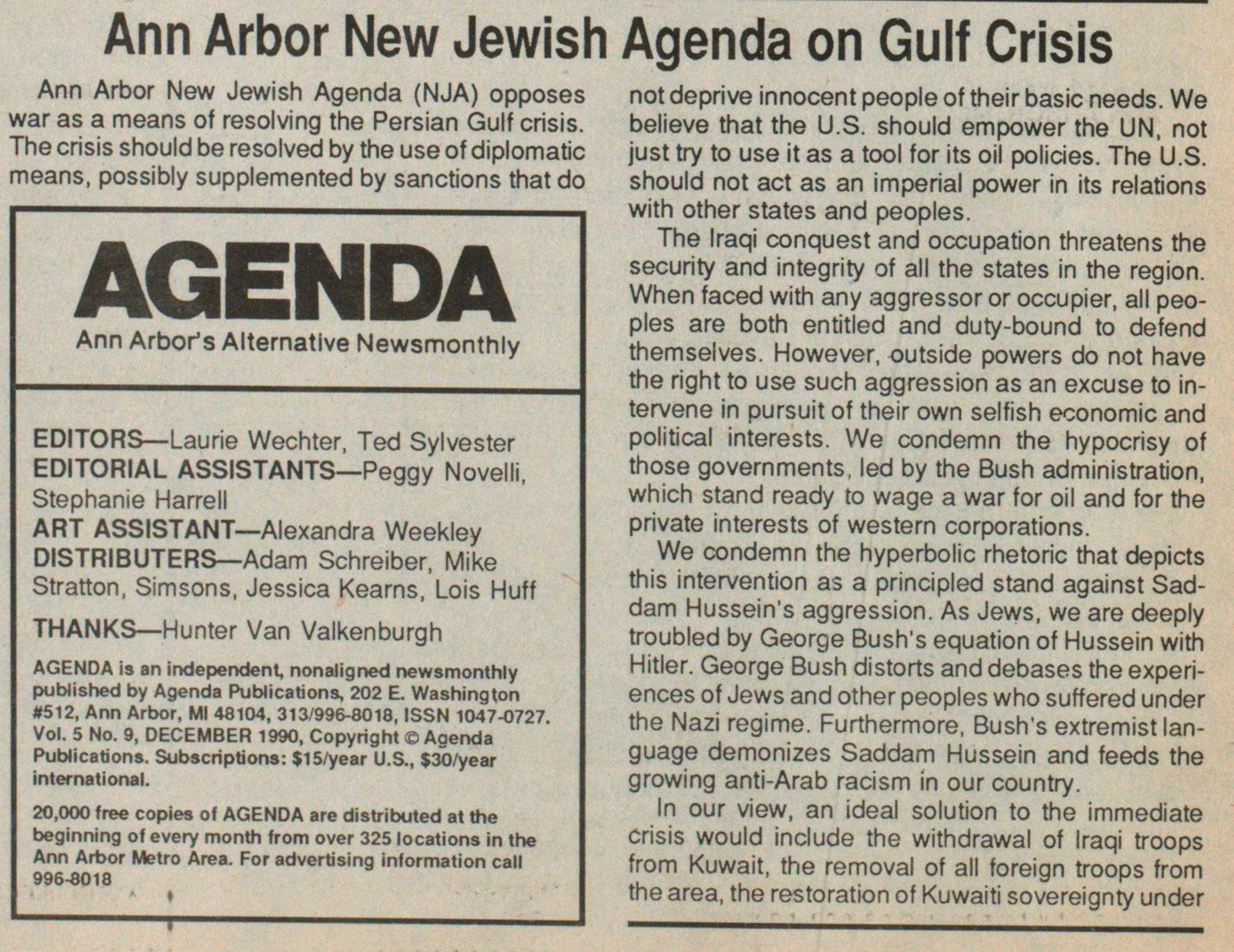 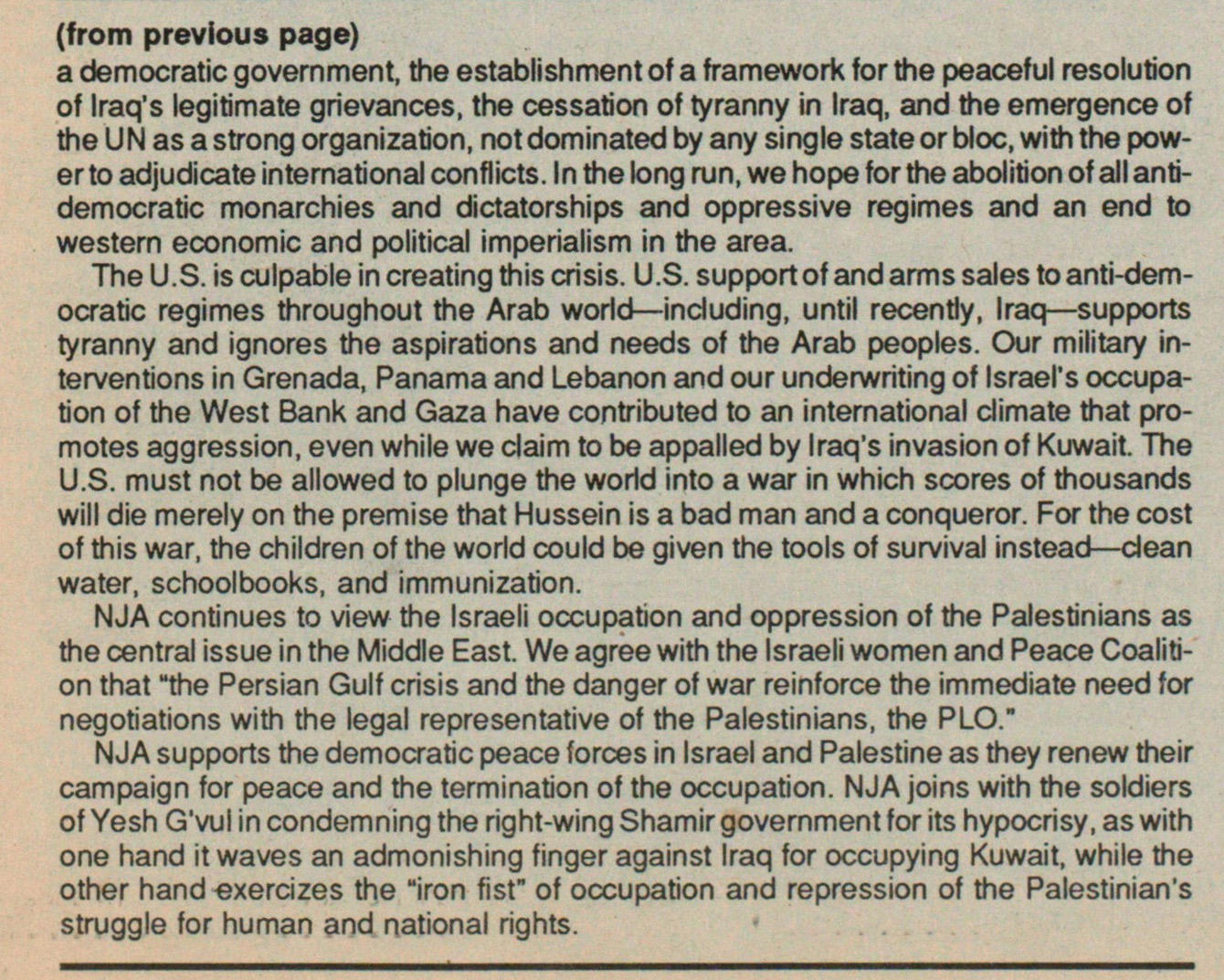 Ann Arbor New Jewish Agenda (NJA) opposes war as a means of resolving the Persian Gulf crisis. The crisis should be resolved by the use of diplomatic means, possibly supplemented by sanctions that do not deprive innocent people of their basic needs. We believe that the U.S. should empower the UN, not just try to use it as a tooi for ts oil policies. The U.S. should not act as an imperial power in its relations with other states and peoples. The Iraqi conquest and occupation threatens the security and integrity of all the states in the región. When faced with any aggressor or occupier, all peoples are both entitled and duty-bound to defend themselves. However, outside powers do not have the right to use such aggression as an excuse to ntervene in pursuit of their own selfish economie and political nterests. We condemn the hypocrisy of those governments, led by the Bush administration, which stand ready to wage a war for oil and for the private interests of western corporations. We condemn the hyperbolic rhetoric that depicts this intervention as a principled stand against Saddam Hussein's aggression. As Jews, we are deeply troubled by George Bush's equation of Hussein with Hitler. George Bush distorts and debases the experiences of Jews and other peoples who suffered under the Nazi regime. Furthermore, Bush's extremist language demonizes Saddam Hussein and feeds the growing anti-Arab racism in our country. In our view, an deal solution to the immediate crisis would include the withdrawal of Iraqi troops from Kuwait, the removal of all foreign troops from the area, the restoration of Kuwaiti sovereignty under (from previous page) a democratie government, the establishment of a framework for the peaceful resolution of Iraq's legitímate grievances, the cessation of tyranny in Iraq, and the emergence of the U N as a strong organization, not dominated by any single state or bloc, with the power to adjudícate international conflicts. In the long run, we hope for the abolition of all antidemocratic monarchies and dictatorships and oppressive regimes and an end to western economie and political imperialism in the area. The U.S. is culpable in creating this crisis. U.S. support of and arms sales toanti-democratic regimes throughout the Arab worid - induding, until recently, Iraq - supports tyranny and ignores the aspirations and needs of the Arab peoples. Our military interventions in Grenada, Panama and Lebanon and our underwriting of Israel's occupation of the West Bank and Gaza have contributed to an international climate that promotes aggression, even while we claim to be appalled by Iraq's invasión of Kuwait. The U.S. must not be allowed to plunge the worid into a war in which scores of thousands will die merely on the premise that Hussein is a bad man and a conqueror. For the cost of this war, the children of the worid could be given the tools of survival instead - clean water, schoolbooks, and immunization. NJA continúes to view the Israeli occupation and oppression of the Palestinians as the central issue in the Middle East. We agree with the Israeli women and Peace Coalition that "the Persian Gulf crisis and the danger of war reinforce the mmediate need for negotiations with the legal representative of the Palestinians, the PLO." NJA supports the democratie peace (orces in Israel and Palestine as they renew their campaign for peace and the termination of the occupation. NJA joins with the soldiers of Yesh G'vul in condemning the right-wing Shamir government for its hypocrisy , as with one hand it waves an admonishing finger against Iraq for occupying Kuwait, while the other hand exercizes the "iron fist" of occupation and repression of the Palestinian's struggle for human and national rights.