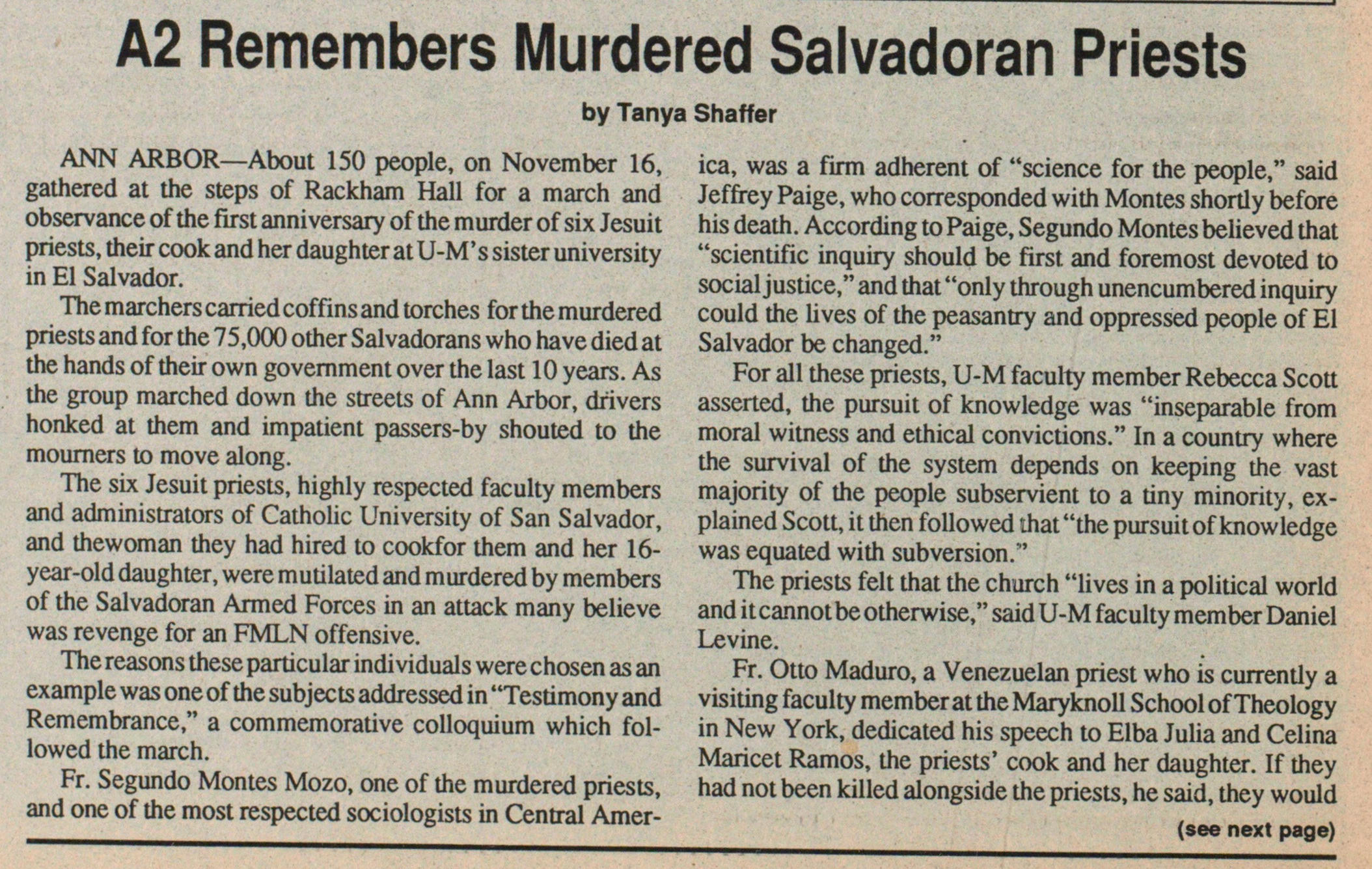 ANN ARBOR- About 150 people, on November 16, gathered at the steps of Rackham Hall for a march and observance of the first anni versary of the murder of six Jesuit priests, their cook and her daughter at U-M's sister university in El Salvador. The marchers carried cof fins and torches for the murdered priests and for the 75,000 other Salvadorans who have died at the hands of their own govemment over the last 10 years. As the group marched down the streets of Ann Arbor, drivers honked at them and impatient passers-by shouted to the mourners to move along. The six Jesuit priests, highly respected faculty members and administrators of Catholic University of San Salvador, and thewoman they had hired to cookfor them and her 16year-old daughter, were mutilated and murdered by members of the Salvadoran Armed Forces in an attack many believe was revenge for an FMLN offensive. The reasons these particular individuals were chosen as an example was one of the subjects addressed in "Testimony and Remembrance," a commemorative colloquium which followed the march. Fr. Segundo Montes Mozo, one of the murdered priests, and one of the most respected sociologists in Central ica, was a firm adherent of "science for the people," said Jeffirey Paige, who corresponded with Montes shortly before his death. According to Paige, Segundo Montes believed that "scientific inquiry should be first and foremost devoted to social justice," and that "only through unencumbered inquiry could the lives of the peasantry and oppressed people of El Salvador be changed." For all these priests, U-M faculty member Rebecca Scott asserted, the pursuit of knowledge was "inseparable from moral witness and ethical convictions." In a country where the survival of the system depends on keeping the vast majority of the people subservient to a tiny minority, explained Scott, it then followed ihat "the pursuit of knowledge was equated with subversión." The priests feit that the church "lives in a political world and itcannotbeotherwise," said U-M faculty member Daniel Levine. Fr. Otto Maduro, a Venezuelan priest who is currently a visiting faculty memberat the Maryknoll School of Theology in New York, dedicated his speech to Elba Julia and Celina Maricet Ramos, the priests' cook and her daughter. If they had not been killed alongside the priests, he said, they would (see next page) (FROM PREVIOUS PAGE) be only two more nameless, faceless deaths. Yet the death of the priests and other prominent martyrs, said Maduro, is only the tip of the iceberg. They represent many more victims of political repression, not those killed by machine guns, but those killed by salaries that cannot buy food, clothing, housing, or medicine, who live in daily terror of speaking up about the conditions of their lives. The fundamental issue, he said, is not the repression, but the system which the repression exists to protect. The repression of the Salvadoran people protects the rights of private enterprises to carry out their business in any way that best serves their profit, regardless of human life. It protects a system, said Maduro, that"gives freedom to those who have the money to buy freedom, and takes freedom from those who do not." The repression is an integral part of this system, because "you can't keep that many people quiet under those kind of conditions except by breaking, torturing, maiming and killing them." A video of the speech "The Psychological Consequences of Political Terrorism," by Fr. Ignacio Martín Baró, one of the murdered Jesuits, was also shown. In Baró's video audience, a man spoke of his growing awareness that the murder in El Salvador, supported by our tax dollars, exists to protect the material interests of the United States - the "American way of life." "If there weren 't a process of deadening here in the U.S. we wouldn't pcrmit this to be done in our ñames," he said. "What is it in our lives," he asked, "that permits our levéis of acquiescence?" I t :' . l I fi . . . , . . ' r