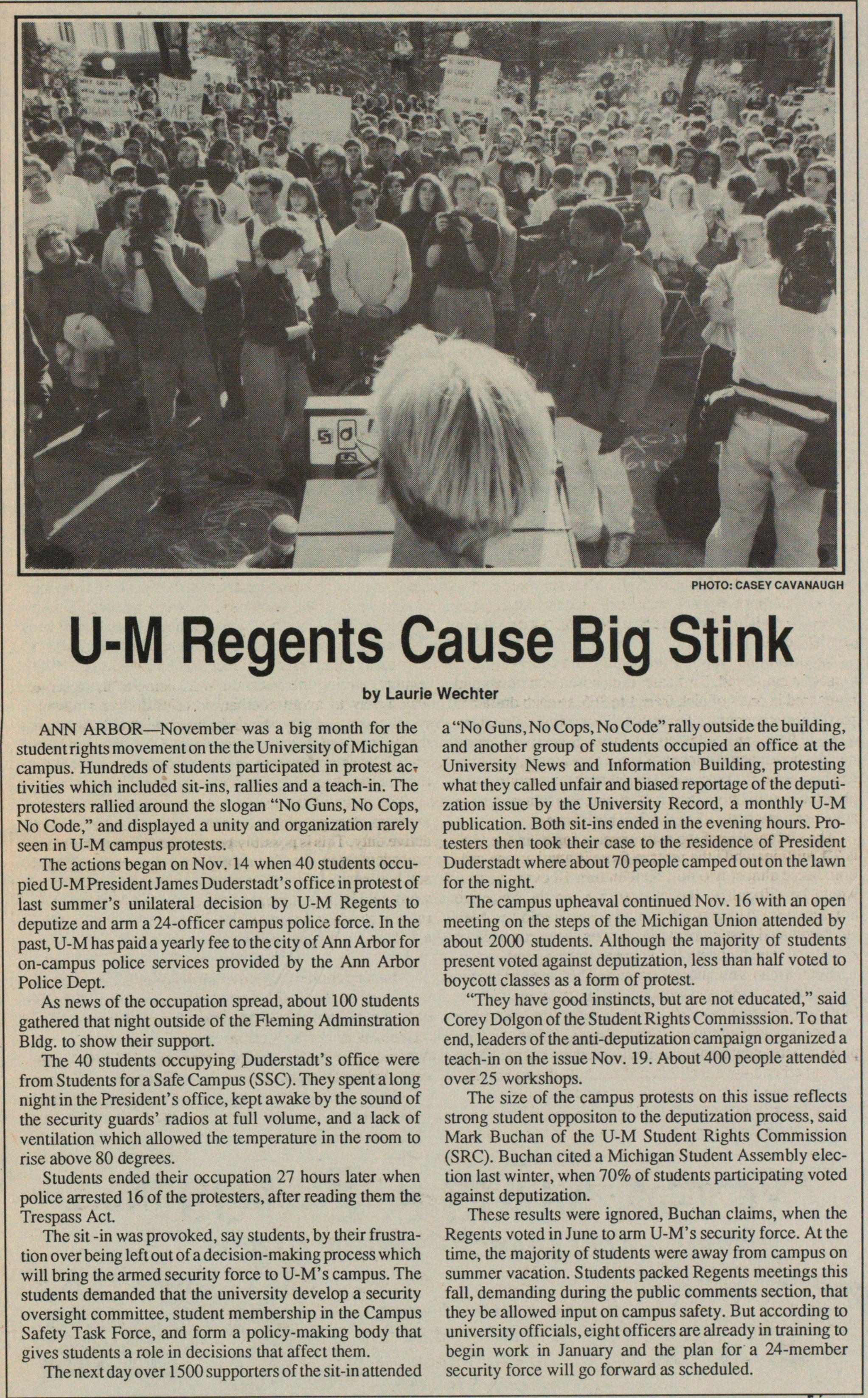 ANN ARBOR - November was a big month for the studentrights movement on the theUniversity of Michigan campus. Hundreds of students participated in protest acT tivities which included sit-ins, rallies and a teach-in. The protesters rallied around the slogan "No Guns, No Cops, No Code," and displayed a unity and organization rarely seen in U-M campus protests. The actions began on Nov. 14 when 40 students occupied U-M President James Duderstadt's office in protest of last summer's unilateral decisión by U-M Regents to deputize and arm a 24-officer campus pólice forcé. In the past, U-M has paid a yearly fee to the city of Ann Arbor for on-campus pólice services provided by the Ann Arbor Pólice Dept. As news of the occupation spread, about 100 students gathered that night outside of the Fleming Adminstration Bldg. to show their support. The 40 students occupying Duderstadt's office were from Students for a Safe Campus (SSC). They spent a long night in the President' s office, kept awake by the sound of the security guards' radios at full volume, and a lack of ventilation which allowed the temperature in the room to rise above 80 degrees. Students ended their occupation 27 hours later when pólice arrested 16 of the protesters, after reading them the Trespass Act. The sit -in was provoked, say students, by their frustration over being left out of a decision-making process which will bring the armed security force to U-M's campus. The students demanded that the university develop a security oversight committee, student membership in the Campus Safety Task Force, and form a policy-making body that gives students a role in decisions that affect them. The next day o ver 1 500 supporters of the sit-in attended a "No Guns, No Cops, No Code" rally outside the building, and another group of students occupied an office at the University News and Information Building, protesting what they called unfair and biased reportage of the deputization issue by the University Record, a monthly U-M publication. Both sit-ins ended in the evening hours. Protesters then took their case to the residence of President Duderstadt where about 70 people camped out on the lawn for the night. The campus upheaval continued Nov. 16 with an open meeting on the steps of the Michigan Union attended by about 2000 students. Although the majority of students present voted against deputization, less than half voted to boycott classes as a form of protest. "They have good instincts, but are not educated," said Corey Dolgon of the Student Rights Cornmisssion. To that end, leaders of the anti-deputization campaign organized a teach-in on the issue Nov. 19. About 400 people attended over 25 workshops. The size of the campus protests on this issue reflects strong student oppositon to the deputization process, said Mark Buchan of the U-M Student Rights Commission (SRC). Buchan cited a Michigan Student Assembly election last winter, when 70% of students participating voted against deputization. These results were ignored, Buchan claims, when the Regents voted in June to arm U-M's security force. At the time, the majority of students were away from campus on summer vacation. Students packed Regents meetings this fall, demanding during the public comments section, that they be allowed input on campus safety. But according to university officials, eight officers are already in training to begin work in January and the plan for a 24-member security force will go forward as scheduled.