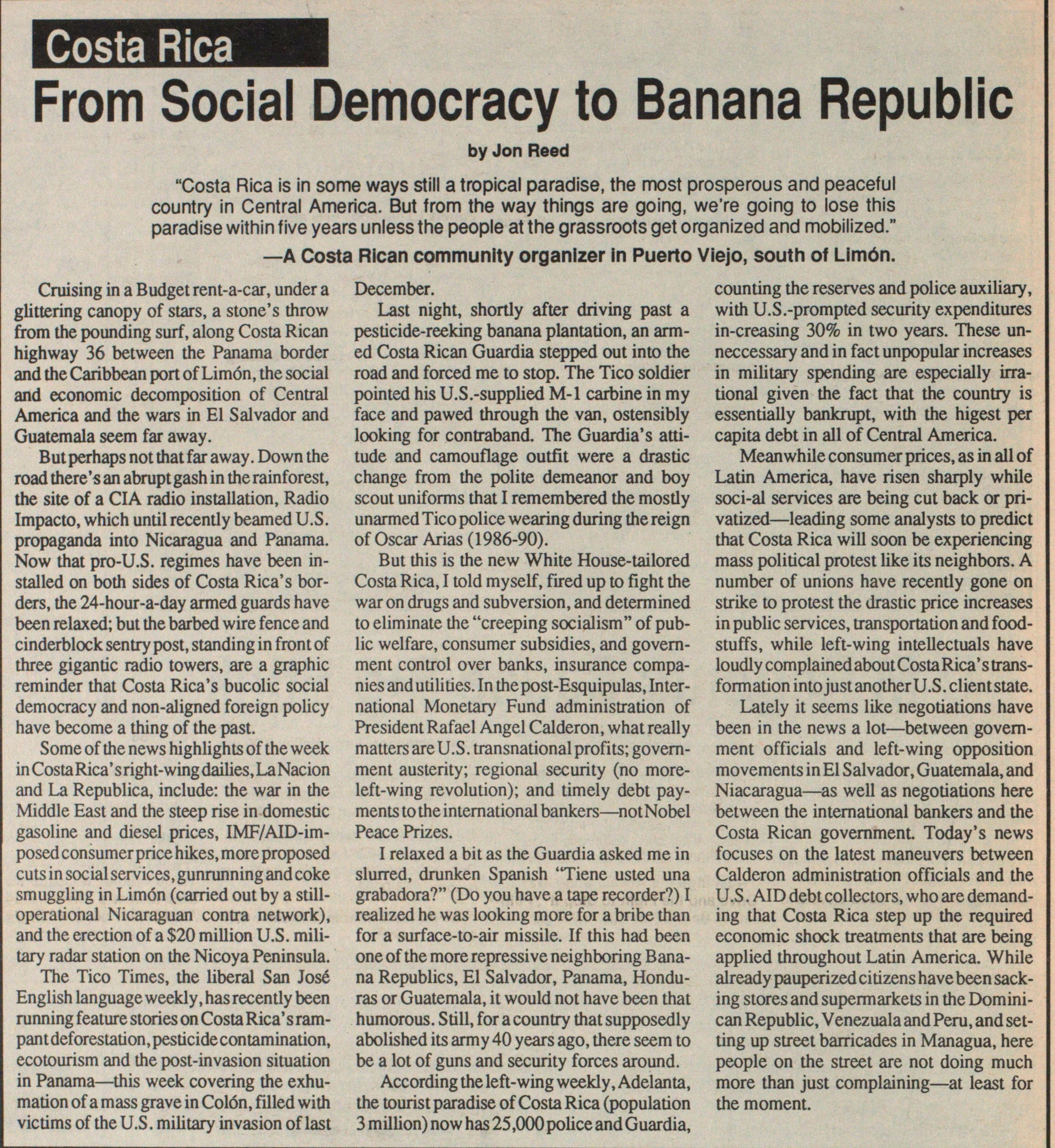 "Costa Rica is in some ways still a tropical paradise, the most prosperous and peaceful country in Central America. But from the way things are going, we're going to lose this paradise within five years unless the people at the grassroots get organized and mobilized." -A Costa Rlcan community organlzer in Puerto Viejo, south of Limón. Cruising in a Budget rent-a-car, under a glittering canopy of stars, a stone's throw from the pounding surf, along Costa Rican highway 36 between the Panama border and the Caribbean port of Limón, the social and economie decomposition of Central America and the wars in El Salvador and Guatemala seem far away. Butperhaps not that far away. Down the road there's an abrupt gash in the rainforest, the site of a CIA radio installation, Radio Impacto, which until recently beamed U.S. propaganda into Nicaragua and Panama. Now that pro-U.S. regimes have been installed on both sides of Costa Rica's borders, the 24-hour-a-day armed guards have been relaxed; but the barbed wire fence and cinderblock sentry post, standing in front of three gigantic radio towers, are a graphic reminder that Costa Rica's bucolic social democracy and non-aligned foreign policy have become a thing of the past. Some of the news highlights of the week in Costa Rica' s right-wing dailies, La Nación and La República, include: the war in the Middle East and the steep rise in domestic gasoline and diesel prices, IMFAID-imposed consumer price hikes, more proposed cuts in social services, gunrunning and coke smuggling in Limón (carried out by a stilloperational Nicaraguan contra network), and the erection of a $20 million U.S. military radar station on the Nicoya Península. The Tico Times, the liberal San José English language weekly , has recently been running feature stories on Costa Rica' s rampantdeforestation.pesticidecontamination, ecotourism and the post-invasion situation in Panama - this week covering the exhumation of a mass grave in Colón, filled with victims of the U.S. military invasión of last December. Last night, shortly after driving past a pesticide-reeking banana plantation, an armed Costa Rican Guardia stepped out into the road and forced me to stop. The Tico soldier pointed his U.S.-supplied M-l carbine in my face and pawed through the van, ostensibly looking for contraband. The Guardia' s attitude and camouflage outfit were a drastic change from the polite demeanor and boy scout uniforms that I remembered the mostly unarmed Tico pólice wearing during the reign of Oscar Arias (1986-90). But this is the new White House-tailored Costa Rica, I told myself, fired up to fight the war on drugs and subversión, and determined to eliminate the "creeping socialism" of public welfare, consumer subsidies, and govemment control over banks, insurance companies and Utilities. In the post-Esquipulas, International Monetary Fund administration of President Rafael Angel Calderón, what really matters are U.S. transnational profits; government austerity; regional security (no moreleft-wing revolution); and timely debt payments to the international bankers - notNobel Peace Prizes. I relaxed a bit as the Guardia asked me in slurred, drunken Spanish "Tiene usted una grabadora?" (Do you have a tape recorder?) I realized he was looking more for a bribe than for a surface-to-air missile. If this had been oneof the more repressive neighboring Banana Republics, El Salvador, Panama, Honduras or Guatemala, it would not have been that humorous. Still, for a country that supposedly abolished its army 40 years ago, there seem to be a lot of guns and security forces around. According the left-wing weekly , Adelanta, the tourist paradise of Costa Rica (population 3 million) now has 25,000 pólice and Guardia, counting the reserves and pólice auxiliary, with U.S.-prompted security expenditures in-creasing 30% in two years. These unneccessary and in fact impopular increases in military spending are especially irrational given the fact that the country is essentially bankrupt, with the higest per capita debt in all of Central America. Meanwhile consumer pnces, as in all of Latin America, have risen sharply while soci-al services are being cut back or privatized - leading some analysts to predict that Costa Rica will soon be experiencing mass political protest like its neighbors. A number of unions have recently gone on strike to protest the drastic price increases in public services, transportation and foodstuffs, while left-wing intellectuals have loudly complained about Costa Rica's transformationintojustanotherU.S. cliëntstate. Lately it seems like negotiations have been in the news a lot - between govemment officials and left-wing opposition movements in El Salvador, Guatemala, and Niacaragua - as well as negotiations here between the international bankers and the Costa Rican government. Today's news focuses on the latest maneuvers between Calderón administration officials and the U.S . AID debt collectors, who are demanding that Costa Rica step up the required economie shock treatments that are being applied throughout Latin America. While already pauperized citizens have been sacking stores and supermarkeis in the Dominican Republic, Venezuala and Peru, and setting up street barricades in Managua, here people on the street are not doing much more than just complaining - at least for the moment.