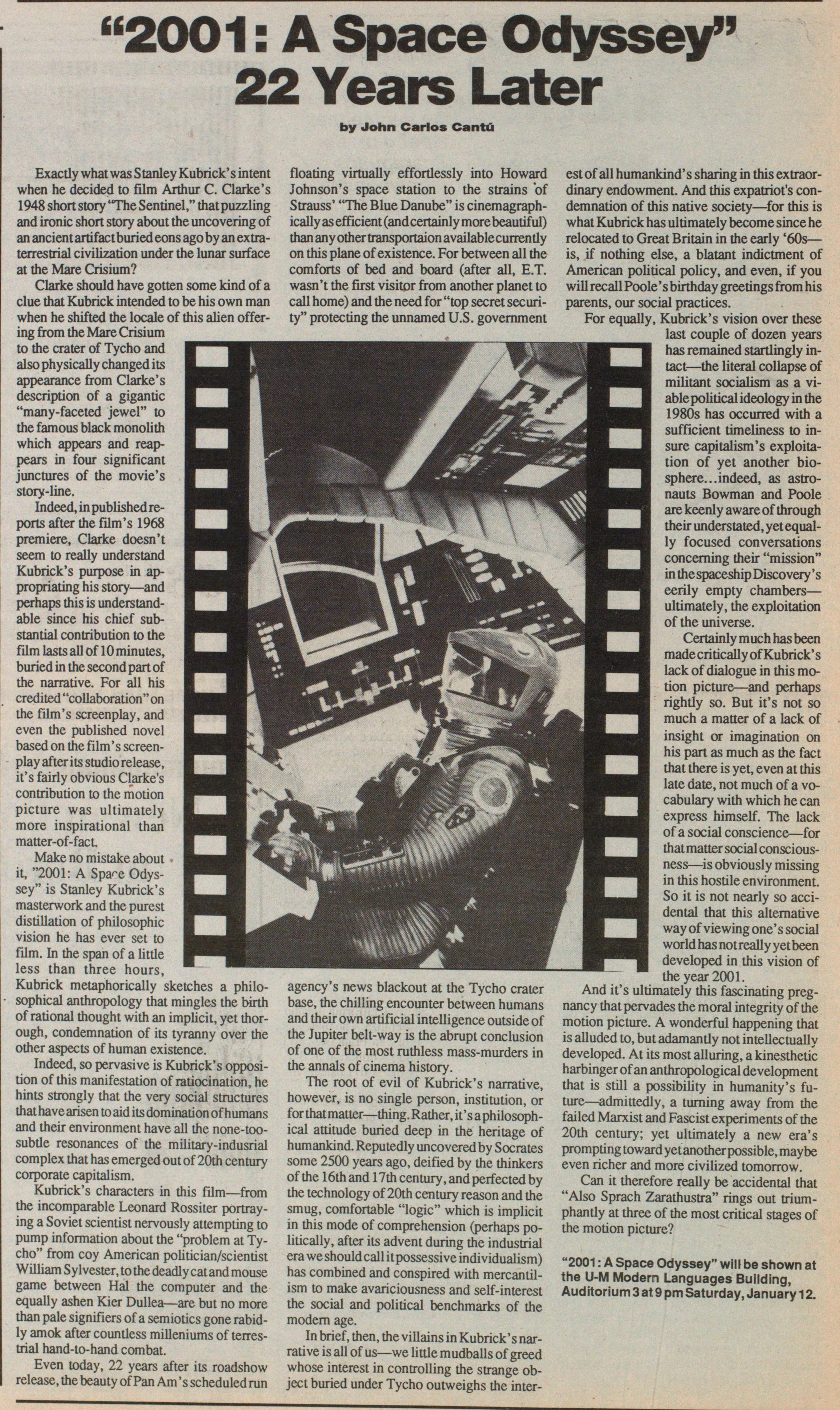 Exactly what was Stanley Kubrick's in tent when he decided to film Arthur C. Clarke's 1948 short story "The Sentinel," thatpuzzling and ironie short story about the uncovering of an ancient artif ac t bun ed eons ago by an extraterrestrial civilization under the lunar surface at the Mare Crisium? Clarke should have gotten some kind of a clue that Kubrick intended to be his own man when he shifted the locale of this alien mg from the Mare Cnsium to the cráter of Tycho and also physically changed its appearance from Clarke's description of a gigantic "many-faceted jewel" to the famous black monolith which appears and reappears in four significant junctures of the movie's story-line. Indeed, in published reports after the film's 1968 premiere, Clarke doesn't seem to really understand Kubrick's purpose in appropriating his story - and perhaps this is understandable since his chief substantial contribution to the film lasts all of 10 minutes, buried in the second part of the narrative. For all his credited "collaboration"on the film's screenplay, and even the published novel based on the film's screenplay afterits studio release, it's fairly obvious Clarke's contribution to the motion picture was ultimately more inspirational than matter-of-fact. Make no mistake about it, "2001: A Spae Odyssey" is Stanley Kubrick's masterwork and the purest distillation of philosophic visión he has ever set to film. In the span of a little less than three hours, Kubrick metaphorically sketches a philosophical anthropology that mingles the birth of rational thought with an implicit, yet thorough, condemnation of its tyranny over the other aspects of human existence. Indeed, so pervasive is Kubrick's opposition of this manifestation of ratiocination, he hints strongly that the very social structures that have arisen to aid its domination of humans and their environment have all the none-toosubtle resonances of the military-indusriai complex that has emerged out of 20th century corporate capitalism. Kubrick's characters in this film - from the incomparable Leonard Rossiter portraying a Soviet scientist nervously attempting to pump information about the "problem at Tycho" from coy American politicianscientist William Sylvester, to the deadly catand mouse game between Hal the computer and the equally ashen Kier Dullea- are but no more than pale signifiers of a semiotics gone rabidly amok after countless milleniums of terrestrial hand-to-hand combat. Even today, 22 years after its roadshow release, the beauty of Pan Am 's scheduled run floatíng virtually effortlessly into Howard Johnson's space station to the strains bf Strauss' "The Blue Danube" is cinemagraphically as efficiënt (andcertainly morebeautiful) than any othertransportaion availablecurrently on this plañe of existence. For between all the comforts of bed and board (after all, E.T. wasn't the first visitor from another planet to cali home) and the need for "top secret security" protecting the unnamed U.S. government agency's news blackout at the Tycho cráter base, the chilling encounter between humans and their own artificial intelligence outside of the Júpiter belt-way is the abrupt conclusión of one of the most ruthless mass-murders in the annals of cinema history. The root of evil of Kubrick's narrative, however, is no single person, institution, or for that matter- thing. Rather, it's a philosophical attitude buried deep in the heritage of humankind. Reputedly uncovered by Sócrates some 2500 years ago, deified by the thinkers of the löthand 17thcentury,andperfectedby the technology of 20th century reason and the smug, comfortable "logic" which is implicit in this mode of comprehension (perhaps politically, after its advent during the industrial era we should cali itpossessive individualism) has combined and conspired with mercantilism to make avariciousness and self-interest the social and political benchmarks of the modem age. In brief, then, the villains in Kubrick's narrative is all of us- we little mudballs of greed whose interest in controlling the strange object buried under Tycho outweighs the est of all humankind's sharing in this extraordinary endowment. And this expatriot's condemnation of this native society - for this is what Kubrick has ui timately become since he relocated to Great Britain in the early '60s - is, if nothing else, a blatant indictment of American political policy, and even, if you will recall Poole 's birthday greetings from his parents, our social practices. For equally, Kubrick's visión over these last couple of dozen years has remained startlingly intact - the literal collapse of militant socialism as a viable poli tical ideology in the 1980s has occurred with a sufficient timeliness to insure capitalism's exploitation of yet another biosphere... indeed, as astronauts Bowman and Poole are keenly aware of through their understated, yet equally focused conversations concerning their "mission" in the spaceship Discovery 's eerily empty chambers - ultimately, the exploitation of the universe. Certainly much has been made critically of Kubrick's lack of dialogue in this mo tion picture - and perhaps rightly so. But it's not so much a matter of a lack of insight or imagination on his part as much as the fact that there is yet, even at this late date, not much of a vocabulary with which he can express himself. The lack of a social conscience - for that matter social consciousness - is obviously missing in this hostile environment. So it is not nearly so accidental that this alternative way of viewing one's social world has notreally yet been developed in this visión of theyear2001. And it's ultimately this fascinating pregnancy thatpervades the moral integrity of the motion picture. A wonderful happening that is alluded to, but adamantly not intellectually developed. At its most alluring, a kinesthetic harbinger of an anthropological development that is still a possibility in humanity's future - admittedly, a tuming away from the failed Marxist and Fascist experiments of the 20th century; yet ultimately a new era's prompting towardyetanotherpossible, maybe even richer and more civilized tomorrow. Can it therefore really be accidental that "Also Sprach Zarathustra" rings out triumphantly at three of the most critical stages of the motion picture? "2001 : A Space Odyssey" will be shown at the U-M Modern Languages Building, Auditorium 3 at 9 pmSaturday.January 12.