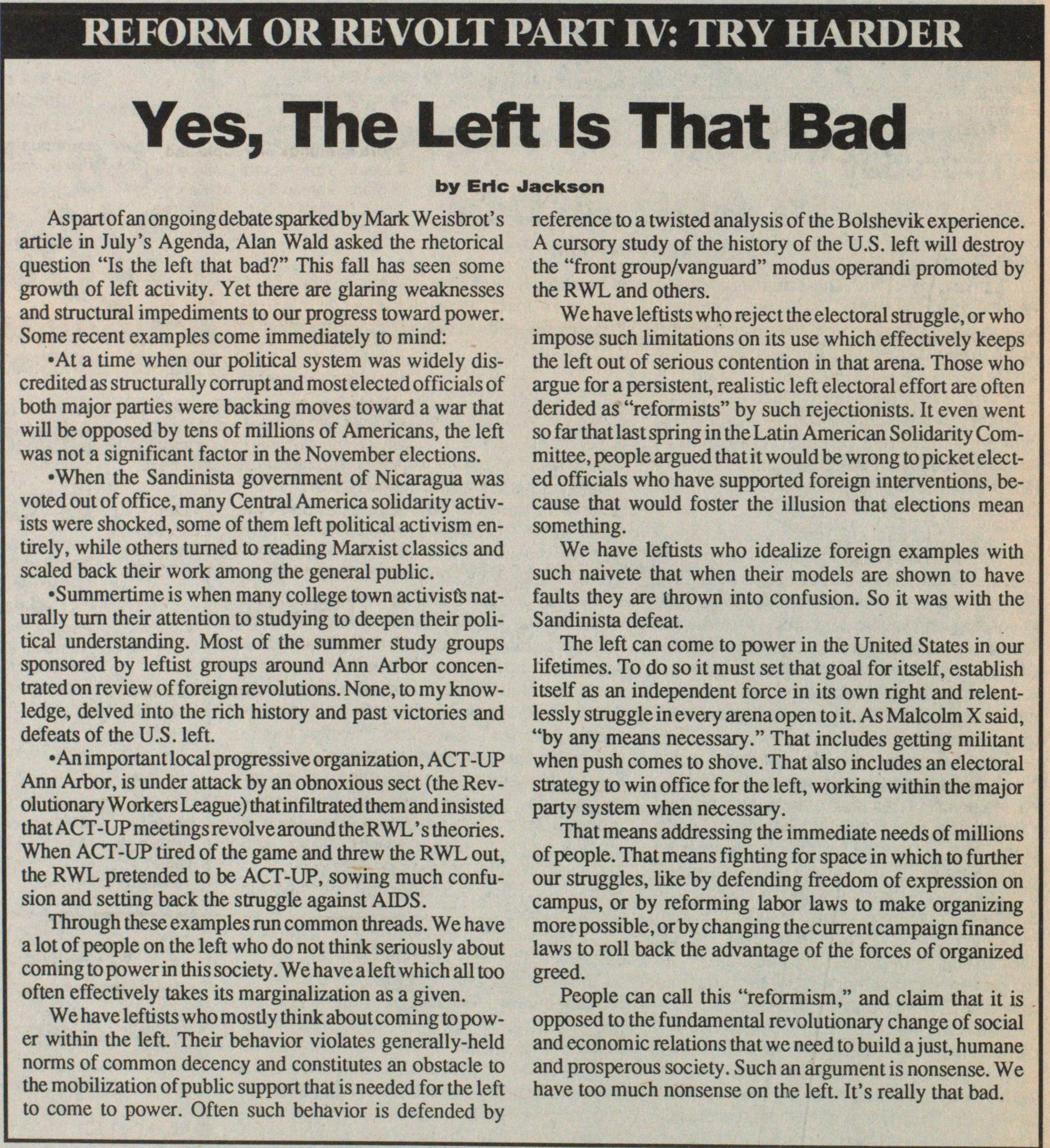 BfltTCffTffTTTiTCTCTT As part of an ongomg debate sparked by Mark Weisbrot' s article in July's Agenda, Alan Wald asked the rhetorical question "Is the left that bad?" This fall has seen some growth of left activity. Yet there are glaring weaknesses and structural impediments to our progress toward power. Some recent examples come immediately to mind: At a time when our political system was widely discredited as structurally corrupt and most elec ted officials of both major parties were backing moves toward a war that will be opposed by tens of millions of Americans, the left was not a significant factor in the November elections. When the Sandinista government of Nicaragua was voted out of office, many Central America solidad ty activists were shocked, some of them left political activism entirely, while others turned to reading Marxist classics and scaled back their work among the general public. Summertime is when many college town activists naturally turn their attention to studying to deepen their political understanding. Most of the summer study groups sponsored by leftist groups around Ann Arbor concentrated on review of foreign revolutions. None, to my knowledge, delved into the rich history and past victories and defeatsoftheU.S.left. An important local progressi ve organization , ACT-UP Ann Arbor, is under attack by an obnoxious sect (the Revolutionary Workers League) that infiltrated them and insisted that ACT-UP meetings revolve around the RWL ' s theories . When ACT-UP tired of the game and threw the RWL out, the RWL pretended to be ACT-UP, sowing much confusión and setting back the struggle against AIDS. Through these examples run common threads. We have a lot of people on the left who do not think seriously about coming to power in this society. We have aleft which all too often effectively takes its marginalization as a given. We have leftists who mos tly think about coming to power within the left Their behavior violates generally-held norms of common decency and constitutes an obstacle to the mobilization of public support that is needed for the left to come to power. Often such behavior is defended by reference to a twisted analysis of the Bolshevik experience. A cursory study of the history of the U.S. left will destroy the "front groupvanguard" modus operandi promoted by the RWL and others. We have leftists who reject the electoral struggle, or who impose such limitations on its use which effectively keeps the left out of serious contention in that arena. Those who argue for a persistent, realistic left electoral effort are often derided as "reformists" by such rejectionists. It even went so far that last spring in the Latin American Solidarity Committee, people argued that it would be wrong to picket elected officials who have supported foreign interventions, because that would foster the illusion that elections mean something. We have leftists who idealize foreign examples with such naivete that when their models are shown to have faults they are thrown into confusión. So it was with the Sandinista defeat. The left can come to power in the United States in our lifetimes. To do so it must set that goal for itself, establish itself as an independent force in its own right and relentlessly struggle in e very arena open to it. As Malcolm X said, "by any means necessary." That includes getting militant when push comes to shove. That also includes an electoral strategy to win office for the left, working within the major party system when necessary. That means addressing the immediate needs of millions of people. That means fighting for space in which to further our struggles, like by defending freedom of expression on campus, or by reforming labor laws to make organizing more possible, or by changing the current campaign fïnance laws to roll back the advantage of the forces of organized greed. People can cali this "reformism," and claim that it is opposed to the fundamental revolutionary change of social and economie relations that we need to build a just, humane and prosperous society. Such an argument is nonsense. We have too much nonsense on the left. It's really that bad.