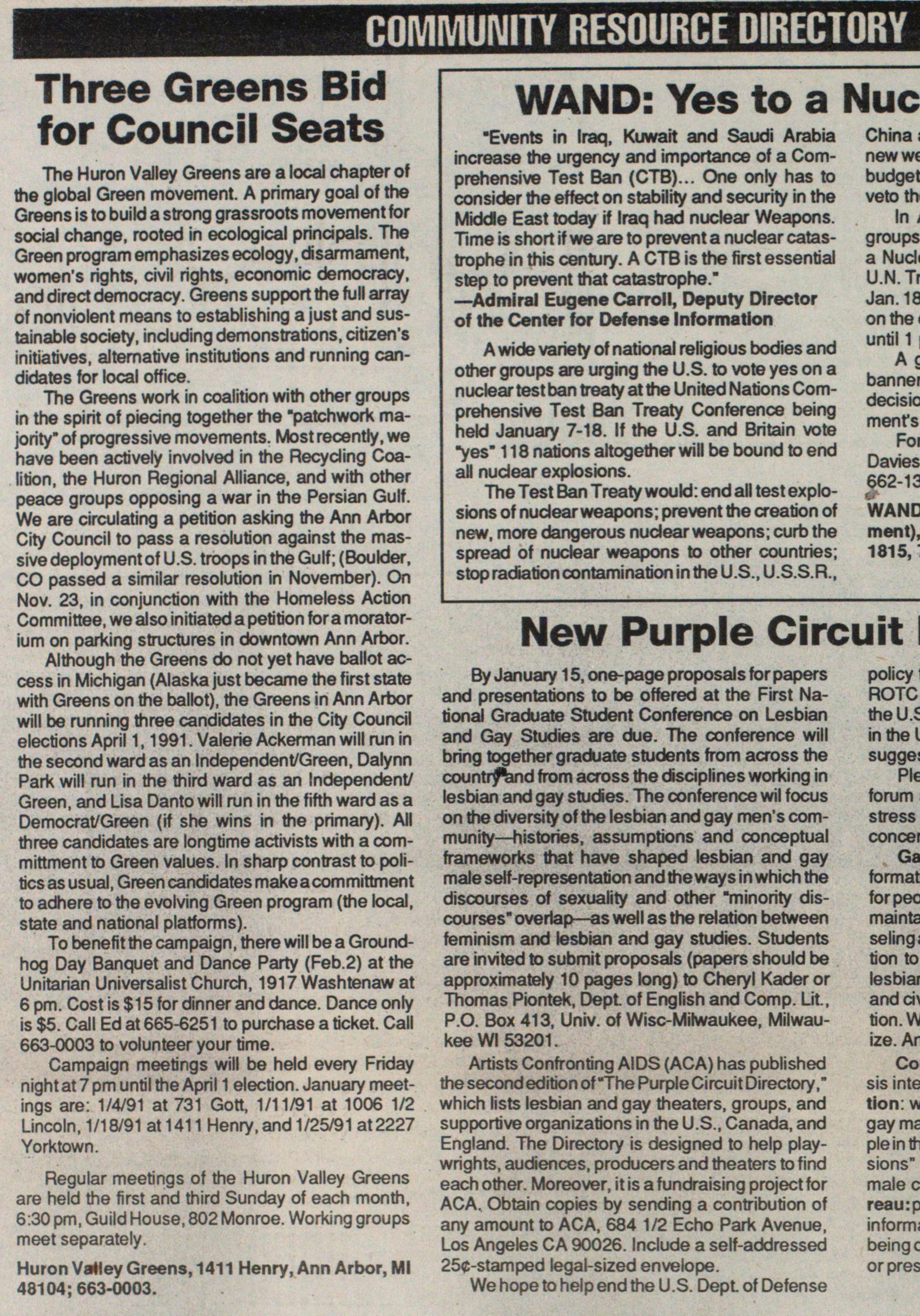 The Hurón Valley Greens are a local chapter of the global Green movement. A primary goal of the Greens is to buiki a strong grassroots movementfor social change, rooted n ecological principáis. The Green program emphasizes ecology, disarmament, women's rights, civil rights, economie democracy, and direct democracy. Greens support the full array of nonviolent means to establishing a just and sustainable society, induding demonstrations, citizen's nitiatives, alternative institutions and running candidates for local office. The Greens work in coalition with other groups in the spirit of piecing together the "patchwork majority" of progressi ve movements. Most recently , we have been actively involved in the Recycling Coalition, the Hurón Regional Alliance, and with other peace groups opposing a war in the Persian Gulf. We are circulating a petition asking the Ann Arbor City Council to pass a resolution against the massive deploymentof U.S. troops in the Gulf; (Boulder, CO passed a similar resolution in November). On Nov. 23, in conjunction with the Homeless Action Committee, we also initiated a petition fora moratorium on parking structures in downtown Ann Arbor. Although the Greens do not yet have ballot access in Michigan (Alaska just became the first state with Greens on the ballot), the Greens in Ann Arbor will be running three candidatos in the City Council elections April 1 , 1 991 . Valerie Ackerman will run in the second ward as an IndependentGreen, Dalynn Park will run in the third ward as an Independent Green, and Lisa Danto will run in the fifth ward as a DemocratGreen (f she wins in the primary). All three candidatos are longtime activists with a committment to Green values. In sharp contrast to politics as usual, Green candidates make a committment to adhere to the evolving Green program (the local, state and national platforms). To benefit the campaign, there will be a Groundhog Day Banquet and Dance Party (Feb.2) at the Unitarian Universalist Church, 1917 Washtenaw at 6 pm. Cost is $15 for dinner and dance. Dance only is $5. Cali Ed at 665-6251 to purchase a ticket. Cali 663-0003 to volunteer your time. Campaign meetings will be held every Friday night at 7 pm until the April 1 electi on. January meetings are: 1491 at 731 Gott, 11191 at 1006 12 Lincoln, 11891 at 141 1 Henry, and 12591 at 2227 Yorktown. Regular meetings of the Huron Valley Greens are held the first and third Sunday of each month, 6:30 pm, Guild House, 802 Monroe. Working groups meet separately. Huron Vattey Greens, 1411 Henry, Ann Arbor, Ml 48104; 663-0003.