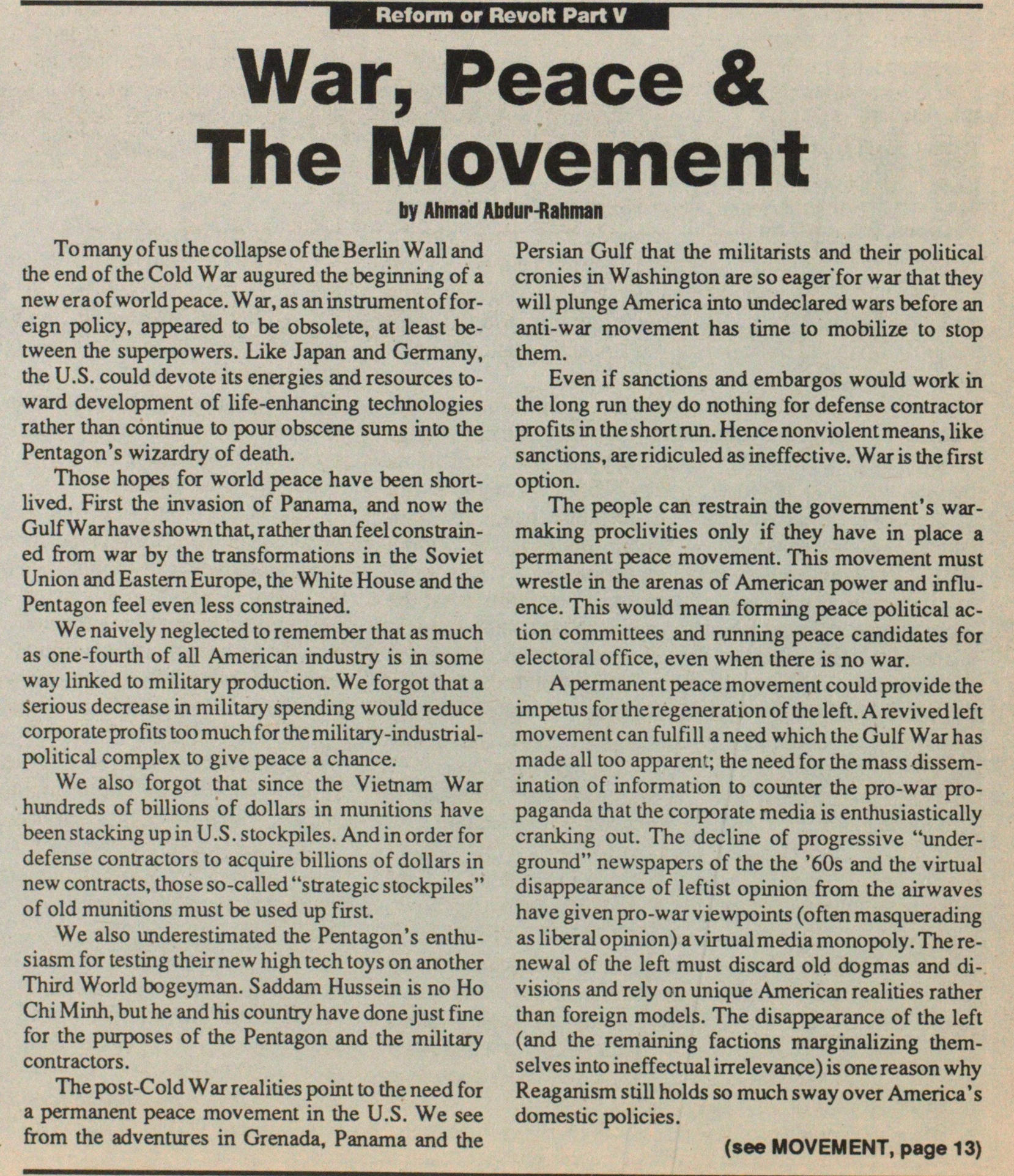 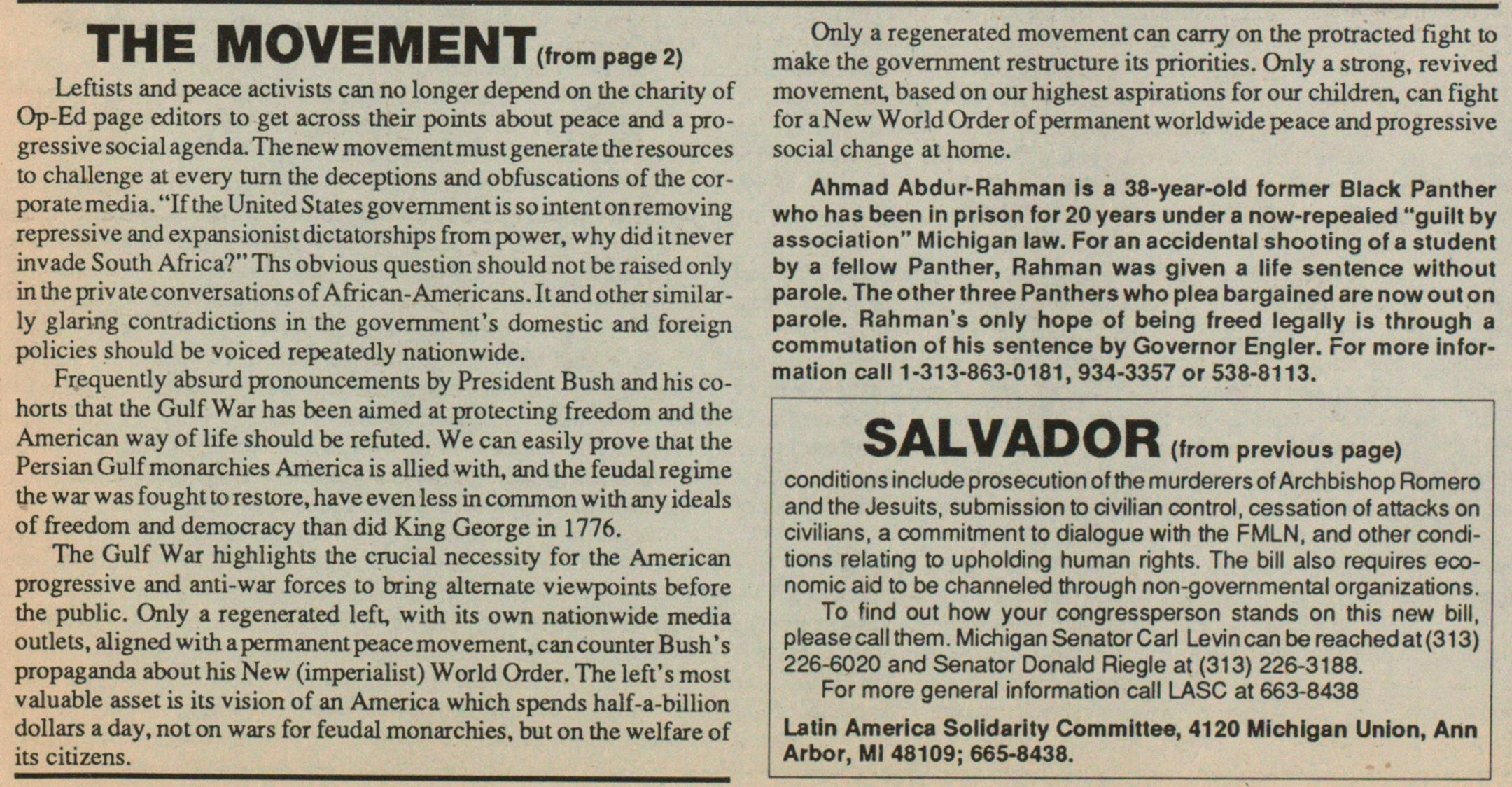 To many of us thecollapse of the Berlín Wall and the end of the Cold War augured the beginning of a new eraof world peace. War, as an instrumentof foreign policy, appeared to be obsolete, at least between the superpowers. Like Japan and Germany, the U.S. could devote its energies and resources toward development of life-enhancing technologies rather than continue to pour obscene sums into the Pentagon's wizardry of death. Those hopes for world peace have been shortlived. First the invasión of Panama, and now the Gulf War have shown that, rather than feel constrained from war by the transformations in the Soviet Union and Eastern Europe, the White House and the Pentagon feel even less constrained. We naively neglected to remember that as much as one-fourth of all American industry is in some way linked to military production. We forgot that a serious decrease in military spending would reduce corporate pro fits too much for the mili tary-industrialpolitical complex to give peace a chance. We also forgot that since the Vietnam War hundreds of billions of dollars in munitions have been stacking up in U.S. stockpiles. And in order for defense contractors to acquire billions of dollars in new contracts, those so-called "strategie stockpiles" of old munitions must be used up first. We also underestimated the Pentagon's enthusiasm for testing their new high tech toys on another Third World bogeyman. Saddam Hussein is no Ho Chi Minh, but he and his country have done just fine for the purposes of the Pentagon and the military contractors. The post-Cold War realities po int to the need for a permanent peace movement in the U.S. We see from the adventures in Grenada, Panama and the Persian Gulf that the militarists and their political cronies in Washington are so eager'for war that they will plunge America into undeclared wars before an anti-war movement has time to mobilize to stop them. Even if sanctions and embargos would work in the long run they do nothing for defense contractor pro fits in the short run. Henee nonviolentmeans, like sanctions, are ridiculed as ineffective. War is the first option. The people can restrain the government's warmaking proclivities only if they have in place a permanent peace movement. This movement must wrestle in the arenas of American power and influence. This would mean forming peace political action committees and running peace candidates for electoral office, even when there is no war. A permanent peace movement could provide the ímpetus for the regeneration of the left. A revived left movement can fulfill a need which the Gulf War has made all too apparent; the need for the mass dissemination of information to counter the pro-war propaganda that the corporate media is enthusiastically cranking out. The decline of progressive "underground" newspapers of the the '60s and the virtual disappearance of leftist opinión from the airwaves have given pro-war viewpoints (often masquerading as liberal opinión) a virtual media monopoly. The renewal of the left must discard oíd dogmas and divisions and rely on unique American realities rather than foreign models. The disappearance of the left (and the remaining factions marginalizing themsel ves into ineff ectual irrelevance) is one reason why Reaganism still holds so much sway over America's domestic policies. (see MOVEMENT, page 13) THE MOVEMENT mp g Leftists and peace activists can no longer depend on the charity of Op-Ed page editors to get across their points about peace and a progressive social agenda. The newmovement must generale the resources to challenge at every turn the deceptions and obfuscations of the corporatemedia. "If the United States govemment is so intentonremoving repressive and expansionist dictatorships from power, why did itnever invade South África?" Ths obvious question should not be raised only in the private conversations of Americans. It and otheT similar - ly glaring contradictions in the govemment's domestic and foreign policies should be voiced repeatedly nationwide. Frequently absurd pronouncements by President Bush and his cohorts that the Gulf War has been aimed at protecting freedom and the American way of life should be refuted. We can easily prove that the Persian Gulf monarchies America is allied with, and the feudal regime the war was fought to restore, have even less in common with any ideáis of freedom and democracy than did King George in 1776. The Gulf War highlights the crucial necessity for the American progressive and anti-war forces to bring altérnate viewpoints before the public. Only a regenerated left, with its own nationwide media outlets, aligned with a permanent peace movement, can counter Bush 's propaganda about his New (imperialist) World Order. The left's most valuable asset is its visión of an America which spends half-a-billion dollars a day, not on wars for feudal monarchies, bul on the welfare of its citizens. Only a regenerated movement can carry on the protracted fight to make the govemment restructure its priorities. Only a strong, revived movement, based on our highest aspirations for our children, can fight for a New World Order of permanent worldwide peace and progressive social change at home. Ahmad Abdur-Rahman is a 38-year-old former Black Panther who has been in prison for 20 years under a now-repealed "guilt by association" Michigan law. For an accidental shooting of a student by a fellow Panther, Rahtnan was given a life sentence without parole. The other three Panthers who plea bargained are now out on parole. Rahman's only hope of being freed legally is through a commutation of his sentence by Governor Engler. For more information cali 1-313-863-0181, 934-3357 or 538-8113.