From Zontar To Wwiii 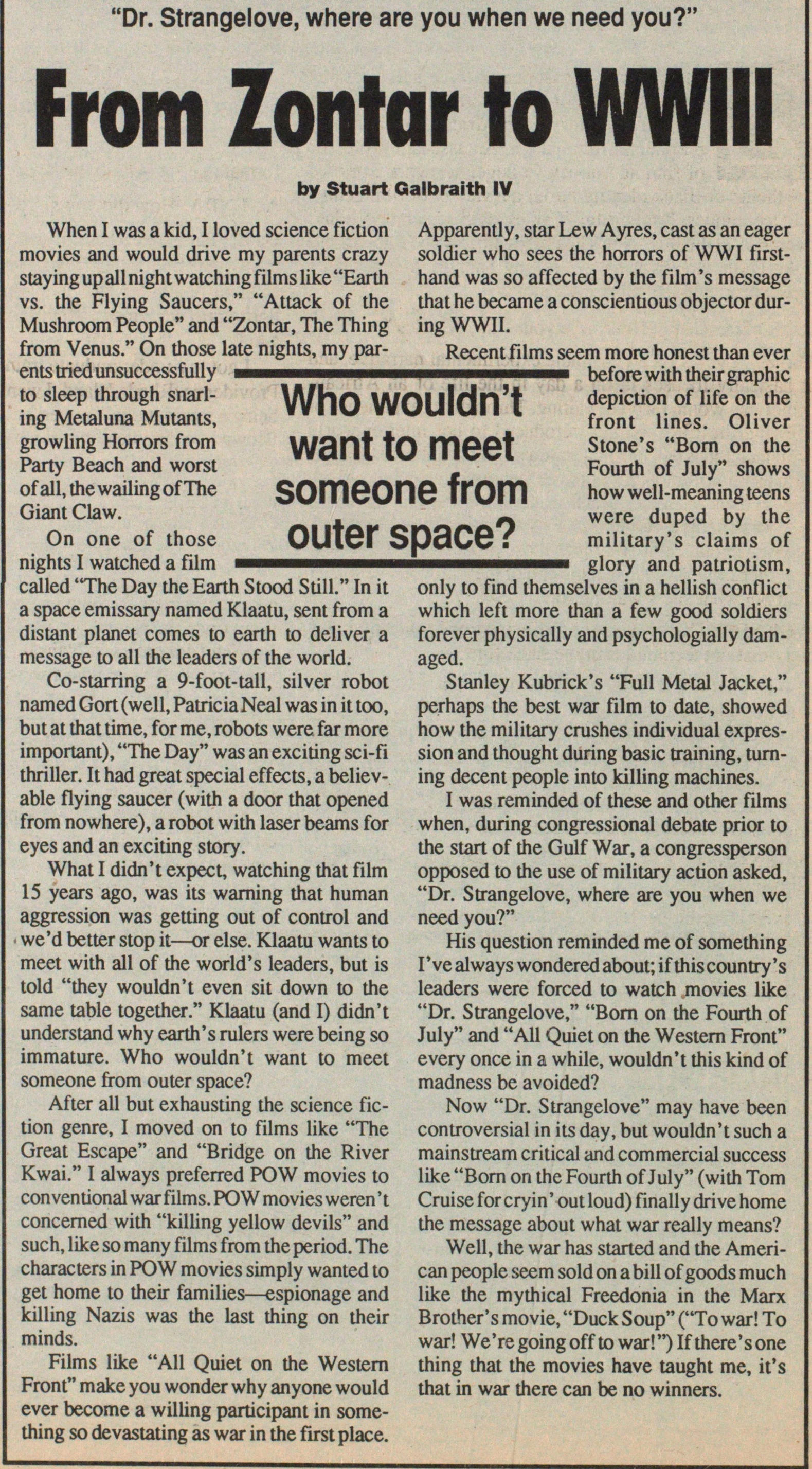 When I was a kid, I loved science fiction movies and would drive my parents crazy staying up all night watching films like "Earth vs. the Flying Saucers," "Attack of the Mushroom People" and "Zontar, The Thing from Venus." On those late nights, my ents tned unsuccessfully to sleep through snarling Metaluna Mutants, growling Horrors from Party Beach and worst of all, the wailingof The Giant Claw. On one of those nights I watched a film called 'The Day the Earth Stood Still." In it a space emissary named Klaatu, sent from a distant planet comes to earth to deliver a message to all the leaders of the world. Co-starring a 9-foot-tall, silver robot named Gort (well, Patricia Neal was in it too, but at that time, for me, robots were far more important), "The Day" was an exciting sci-fi thriller. It had great special effects, a believable flying saucer (with a door that opened from nowhere), a robot with laser beams for eyes and an exciting story. What I didn't expect, watching that film 15 years ago, was its warning that human aggression was getting out of control and we'd better stop it - or else. Klaatu wants to meet with all of the world's leaders, but is told "they wouldn't even sit down to the same table together." Klaatu (and I) didn't understand why earth's rulers were being so immature. Who wouldn't want to meet someone from outer space? After all but exhausting the science fiction genre, I moved on to films like "The Great Escape" and "Bridge on the River Kwai." I always preferred POW movies to con ventional war films. POW movies weren 't concerned with "killing yellow devils" and such, like so many films from the period. The characters in POW movies simply wanted to get home to their families - espionage and killing Nazis was the last thing on their minds. Films like "All Quiet on the Western Front" make you wonder why anyone would ever become a willing participant in something so devastating as war in the first place. Apparently, star Lew Ayres, cast as an eager soldier who sees the horrors of WWI firsthand was so affected by the film 's message that he became a conscientious objector during WWII. Recent films seem more honest than ever before wilh theirgraphic dcpiction of life on the front lines. Oliver Stone's "Bom on the Fourth of July" shows how well-meaning teens were duped by the military's claims of glory and patriotism, only to fïnd themselves in a hellish conflict which left more than a few good soldiers forever physically and psychologially damaged. Stanley Kubrick's "Full Metal Jacket," perhaps the best war film to date, showed how the military crushes individual expression and thought during basic training, turning decent people into killing machines. I was reminded of these and other films when, during congressional debate prior to the start of the Gulf War, a congressperson opposed to the use of military action asked, "Dr. Strangelove, where are you when we need you?" His question reminded me of something I'vealways wonderedabout; if thiscountry's leaders were forced to watch movies like "Dr. Strangelove," "Born on the Fourth of July" and "All Quiet on the Western Front" every once in a while, wouldn't this kind of madness be avoided? Now "Dr. Strangelove" may have been controversial in its day, but wouldn't such a mainstream critica! and commercial success like "Born on the Fourth of July" (with Torn Cruise forcryin' out loud) finally drive home the message about what war really means? Well, the war has started and the American people seem sold on a bilí of goods much like the mythical Freedonia in the Marx Brother's movie, "Duck Soup" ("To war! To war! We'regoingofftowar!")Ifthere'sone thing that the movies have taught me, it's that in war there can be no winners. Who wouldn't want to meet someone f rom outer space?