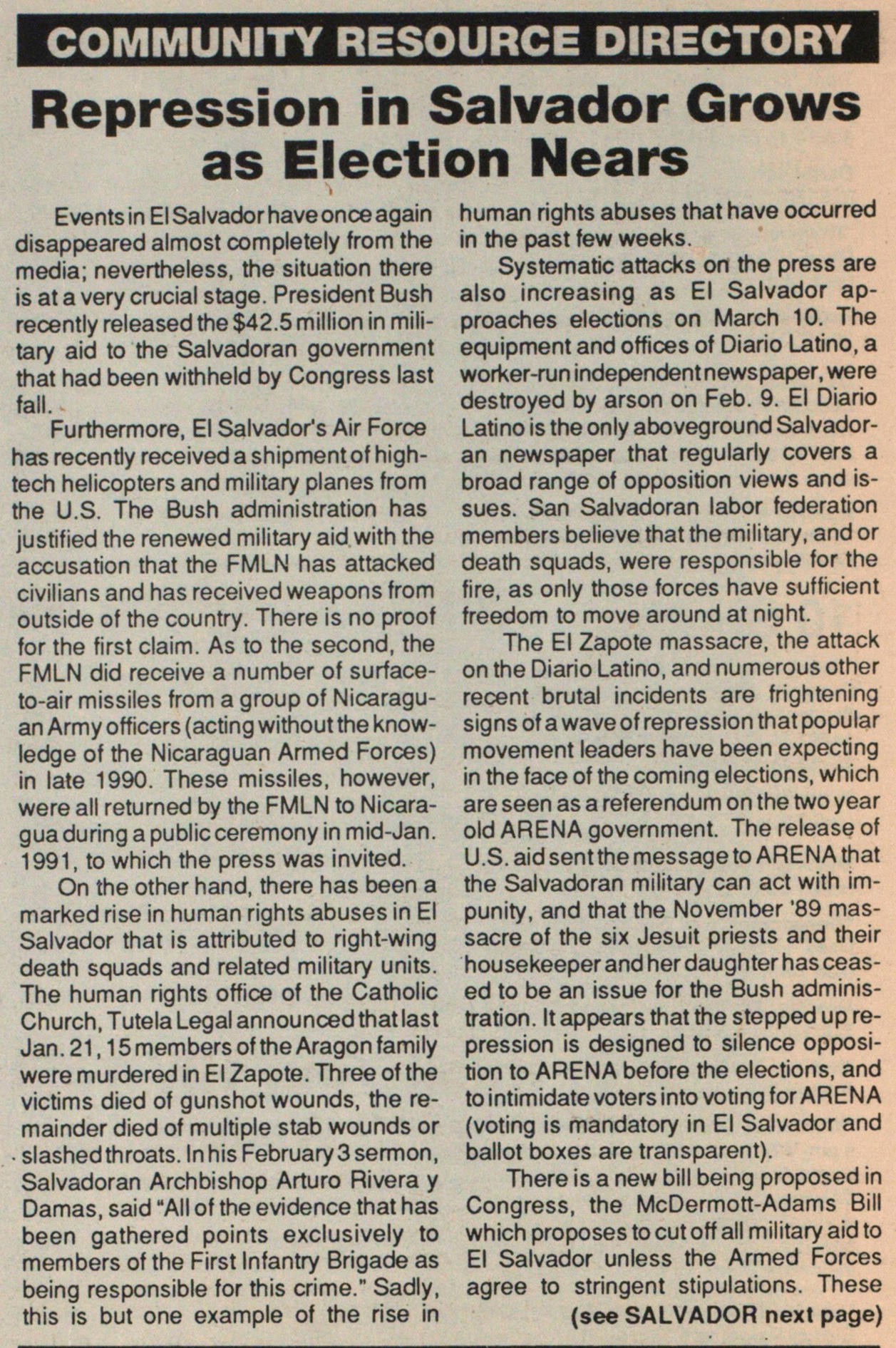 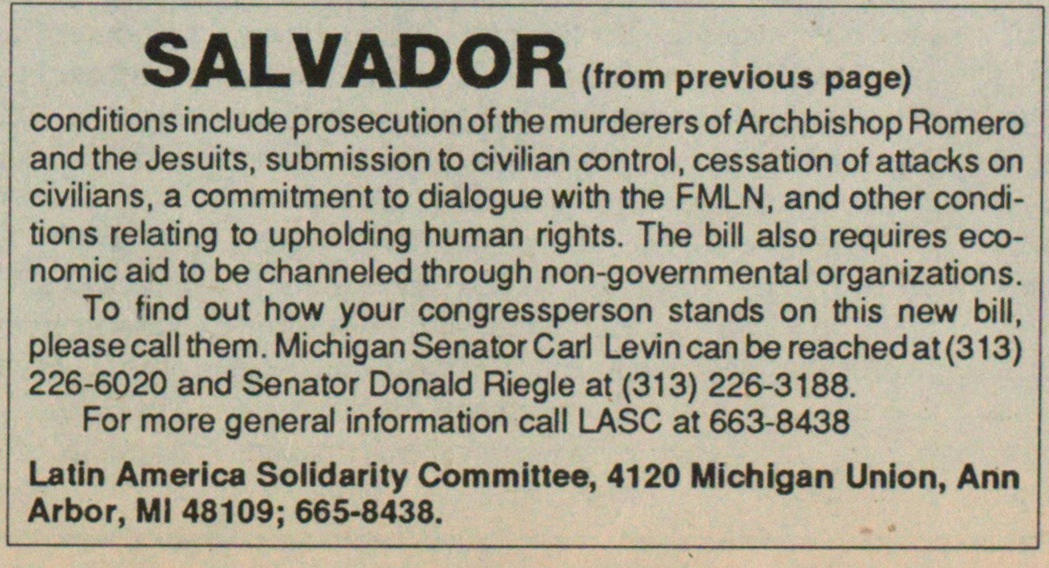 Eventsin ElSalvadorhaveonceagain disappeared almost completely from the media; nevertheless, the situation there s at a very crucial stage. President Bush recently released the $42.5 million in military aid to the Salvadoran government that had been withheld by Congress last fall. Furthermore, El Salvador's Air Force has recently received a shipment of hightech helicopters and military planes from the U.S. The Bush administraron has justified the renewed military aid with the accusation that the FMLN has attacked civilians and has received weapons from outside of the country. There is no proof for the first claim. As to the second, the FMLN did receive a number of surfaceto-air missiles from a group of Nicaraguan Army officers (acting without the knowledge of the Nicaraguan Armed Forces) in late 1990. These missiles, however, were all returned by the FMLN to Nicaragua during a public ceremony in mid-Jan. 1991, to which the press was invited. On the other hand, there has been a marked rise in human rights abuses in El Salvador that is attributed to right-wing death squads and related military units. The human rights office of the Catholic Church, Tutela Legal announced that last Jan. 21,1 5 members of the Aragón family were murdered in El Zapote. Three of the victims died of gunshot wounds, the remainder died of multiple stab wounds or ■ slashed throats. In his February 3 sermón , Salvadoran Archbishop Arturo Rivera y Damas, said "All of the evidence that has been gathered points exclusively to members of the First Infantry Brigade as being responsible for this crime." Sadly, this is but one example of the rise in human rights abuses that have occurred in the past few weeks. Systematic attacks on the press are also ncreasing as El Salvador approaches elections on March 10. The equipment and offices of Diario Latino, a worker-run independent newspaper, we re destroyed by arson on Feb. 9. El Diario Latino is the only aboveground Salvadoran newspaper that regularly covers a braad range of opposition views and issues. San Salvadoran labor federation members believe that the military, and or death squads, were responsible for the fire, as only those forces have sufficient freedom to move around at night. The El Zapote massacre, the attack on the Diario Latino, and numerous other recent brutal incidents are frightening signs of a wave of repression that popular movement leaders have been expecting in the face of the coming elections, which are seen as a referendum on the two year old ARENA government. The release of U.S.aid sent the message to ARENA that the Salvadoran military can act with impunity, and that the November '89 massacre of the six Jesuit priests and their housekeeper and her daughter has ceased to be an issue for the Bush administration. Itappears that the steppedup repression is designed to silence opposition to ARENA before the elections, and to intimídate votersintovoting for ARENA (voting is mandatory in El Salvador and ballot boxes are transparent). There is a new bill being proposed in Congress, the McDermott-Adams Bill which proposes to cut off all military aid to El Salvador unless the Armed Forces agree to stringent stipulations. These (see SALVADOR next page) SALVADOR (from previous page) conditions nel ude prosecution of the murderers of Archbishop Romero and the Jesuits, submission to rivilian control, cessation of attacks on civilians, a commitment to dialogue with the FMLN, and other conditions relating to upholding human rights. The bilí also requires economie aid to be channeled through non-governmental organizations. To find out how your congressperson stands on this new bill, please cali them . Michigan Senator Cari Le vin can be reached at (3 1 3) 226-6020 and Senator Donald Riegle at (313) 226-3188. For more general nformation cali LASC at 663-8438 Latín America Solidarity Committee, 4120 Michigan Union, Ann Arbor, MI 48109; 665-8433.