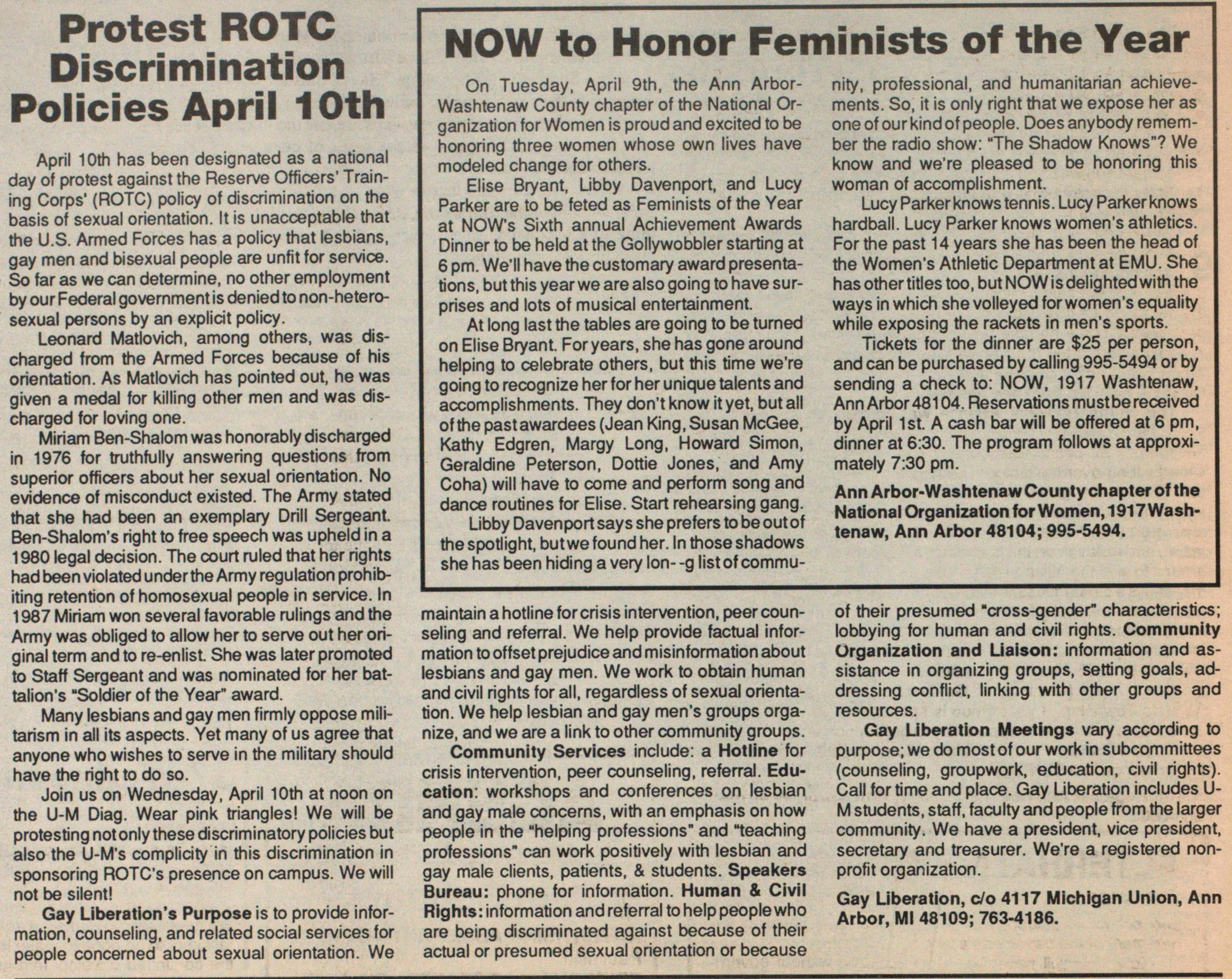 April 10th has been designated as a national day of protest against the Reserve Officers' Training Corps' (ROTC) policy of discrimination on the basis of sexual orientation. It is unacceptable that the U.S. Armed Forces has a policy that lesbians, gay men and bisexual people are unfit for service. So far as we can determine, no other employment by our Federal government is denied to non-heterosexual persons by an explicit policy.

Leonard Matlovich, among others, was discharged from the Armed Forces because of his orientation. As Matlovich has pointed out, he was given a medal for killing other men and was discharged for loving one.

Miriam Ben-Shalom was honorably discharged in 1976 for truthfully answering questions from superior officers about her sexual orientation. No evidence of misconduct existed. The Army stated that she had been an exemplary Drill Sergeant. Ben-Shalom's right to free speech was upheld in a 1980 legal decision. The court ruled that her rights had been violated under the Army regulation prohibiting retention of homosexual people in service. In 1 987 Miriam won several favorable rulings and the Army was obliged to allow her to serve out her original term and to re-enlist. She was later promoted to Staff Sergeant and was nominated for her battalion's "Soldier of the Year" award.

Many lesbians and gay men firmly oppose militarism in all its aspects. Yet many of us agree that anyone who wishes to serve in the military should have the right to do so.

Join us on Wednesday, April 10th at noon on the U-M Diag. Wear pink triangles! We will be protesting not only these discriminatory policies but also the U-M's complicity in this discrimination in sponsoring ROTC's presence on campus. We will not be silent!

Gay Liberation's Purpose is to provide information, counseling, and related social services for people concerned about sexual orientation. We maintain a hotline for crisis intervention, peer counseling and referral. We help provide factual information to offset prejudice and misinformation about lesbians and gay men. We work to obtain human and civil rights for all, regardless of sexual orientation. We help lesbian and gay men's groups organize, and we are a link to other community groups.

Community Services include: a Hotline for crisis intervention, peer counseling, referral. Education: workshops and conferences on lesbian and gay male concerns, with an emphasis on how people in the "helping professions" and "teaching professions" can work positively with lesbian and gay male clients, patients, & students. Speakers Bureau: phone for information. Human & Civil Rights: information and referral to help people who are being discriminated against because of their actual or presumed sexual orientation or because of their presumed "cross-gender" characteristics; lobbying for human and civil rights. Community Organization and Liaison: information and assistance in organizing groups, setting goals, addressing conflict, linking with other groups and resources.

Gay Liberation Meetings vary according to purpose; we do most of our work in subcommittees (counseling, groupwork, education, civil rights). Call for time and place. Gay Liberation includes UM students, staff , faculty and people from the larger community. We have a president, vice president, secretary and treasurer. We're a registered non-profit organization.