"The Andes Are The Central America Of The 90s" 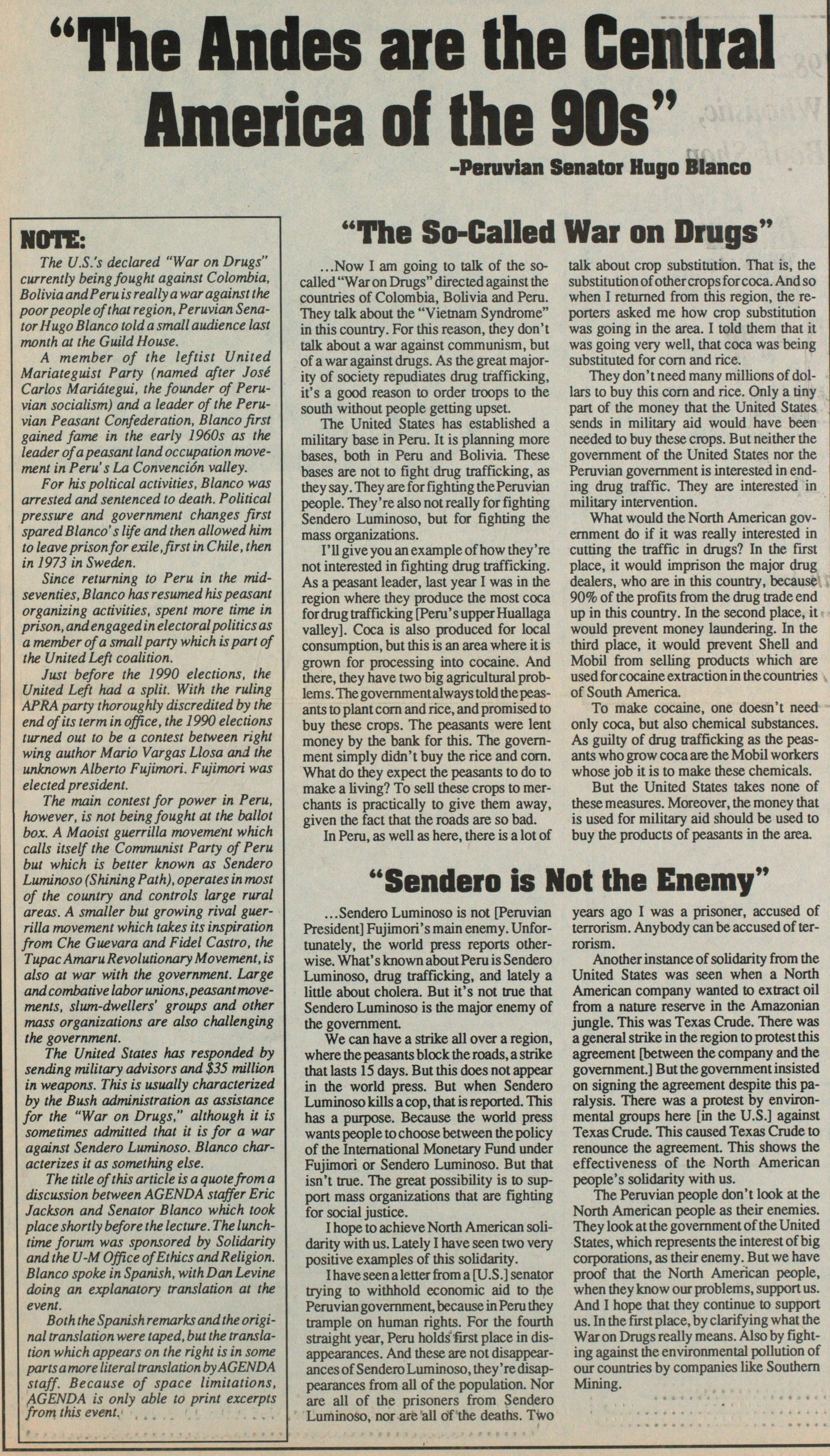 The U.S.'s declared "War on Drugs" currently being fought against Colombia, Bolivia and Peru is really a war against the poor people of that region, Peruvian Senator Hugo Blanco told a small audience last month at the Guild House.

A member of the leftist United Mariateguist Party (named after José Carlos Mariátegui, the founder of Peruvian socialism) and a leader of the Peruvian Peasant Confederation, Blanco first gained fame in the early 1960 s as the leader of a peasant land occupation movement in Peru's La Convención valley.

For his political activities, Blanco was arrested and sentenced to death. Political pressure and government changes first spared Blanco's life and then allowed him to leave prison for exile, first in Chile, then in 1973 in Sweden.

Since returning to Peru in the mid-seventies, Blanco has resumed his peasant organizing activities, spent more time in prison, and engaged in electoral politics as a member of a small party which is part of the United Left coalition.

Just before the 1990 elections, the United Left had a split. With the ruling APRA party thoroughly discredited by the end of its term in office, the 1990 elections turned out to be a contest between right wing author Mario Vargas Llosa and the unknown Alberto Fujimori. Fujimori was elected president.

The main contest for power in Peru, however, is not being fought at the ballot box. A Maoist guerilla movement which calls itself the Communist Party of Peru but which is better known as Sendero Luminoso (Shining Path), operates in most of the country and controls large rural areas. A smaller but growing rival guerilla movement which takes its inspiration from the Che Guevara and Fidel Castro, the Tupac Amaru Revolutionary Movement, is also at war with the government. Large and combative labor unions, peasant movements, slum-dwellers' groups and other mass organizations are also challenging the government.

Large and combative labor unions, peasant movements, slum-dwellers' groups and other mass organizations are also challenging the government. The United States has responded by sending military advisors and $35 million in weapons. This is usually characterized by the Bush administration as assistance for the "War on Drugs," although it is sometimes admitted that it is for a war against Sendero Luminoso. Blanco characterizes it as something else.

The title of this article is a quote from a discussion between AGENDA staffer Eric Jackson and Senator Blanco which took place shortly before the lecture. The lunchtime forum was sponsored by Solidarity and the U-M Office of Ethics and Religion. Blanco spoke in Spanish, with Dan Levine doing an explanatory translation at the event.

Both the Spanish remarks and the original translation were taped, but the translation which appears on the right is in some parts a more literal translation by AGENDA staff. Because of space limitations, AGENDA is only able to print excerpts from this event.

. . .Now I am going to talk of the so-called "War on Drugs" directed against the countries of Colombia, Bolivia and Peru. They talk about the "Vietnam Syndrome" in this country. For this reason, they don't talk about a war against communism, but of a war against drugs. As the great majority of society repudiates drug trafficking, it's a good reason to order troops to the south without people getting upset.

The United States has established a military base in Peru. It is planning more bases, both in Peru and Bolivia. These bases are not to fight drug trafficking, as they say. They are for fighting the Peruvian people. They 're also not really for fighting Sendero Luminoso, but for fighting the mass organizations.

I'm give you an example of how they're not interested in fighting drug trafficking. As a peasant leader, last year I was in the region where they produce the most coca for drug trafficking [Peru's upper Huallaga valley]. Coca is also produced for local consumption, but this is an area where it is grown for processing into cocaine. And there, they have two big agricultural problems. The government always told the peasants to plant corn and rice, and promised to buy these crops. The peasants were lent money by the bank for this. The government simply didn't buy the rice and corn. What do they expect the peasants to do to make a living? To sell these crops to merchants is practically to give them away, given the fact that the roads are so bad.

In Peru, as well as here, there is a lot of talk about crop substitution. That is, the substitution of other crops for coca. And so when I returned from this region, the reporters asked me how crop substitution was going in the arca. I told them that it was going very well, that coca was being substituted for corn and rice.

To make cocaine, one doesn't need only coca, but also chemical substances. As guilty of drug trafficking as the peasants who grow coca are the Mobil workers whose job it is to make these chemicals.

But the United States takes none of these measures. Moreover, the money that is used for military aid should be used to buy the products of peasants in the area.

"Sendero is Not the Enemy"

We can have a strike all over a region, where the peasants block the roads, a strike that lasts 15 days. But this does not appear in the world press. But when Sendero Luminoso kills a cop, that is reported. This has a purpose. Because the world press wants people to choose between the policy of the International Monetary Fund under Fujimori or Sendero Luminoso. But that isn't true. The great possibility is to support mass organizations that are fighting for social justice.

I hope to achieve North American solidarity with us. Lately I have seen two very positive examples of this solidarity.

Another instance of solidarity from the United States was seen when a North American company wanted to extract oil from a nature reserve in the Amazonian jungle. This was Texas Crude. There was a general strike in the region to protest this agreement [between the company and the government.] But the government insisted on signing the agreement despite this paralysis. There was a protest by environmental groups here [in the U.S.] against Texas Crude. This cased Texas Crude to renounce their agreement. This shows the effectiveness of the North American people's solidarity with us.

The Peruvian people don't look at the North American people as their enemies. They look at the government of the United States, which represents the interest of big corporations, as their enemy. But we have proof that the North American people, when they know our problems, support us. And I hope that they continue to support us. In the first place, by clarifying what the War on Drugs really means. Also by fighting against the environmental pollution of our countries by companies like Southern Mining.