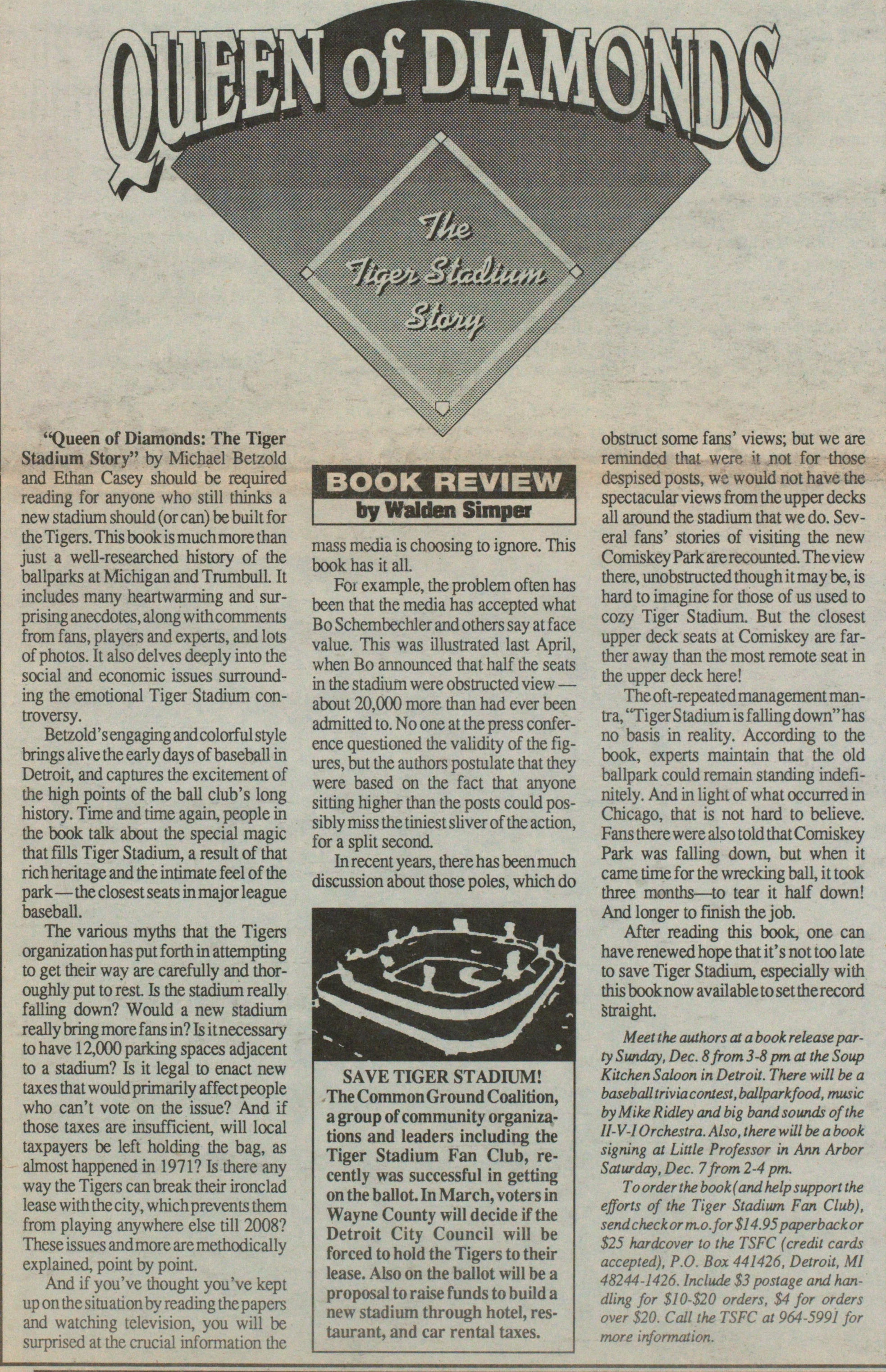 "Queen of Diamonds: The Tiger Stadium Story" by Michael Betzold and Ethan Casey should be required reading for anyone who still thinks a new stadium should (or can) be built for the Tigers. This book is much more than just a well-researched history of the ballparks at Michigan and Trumbull. It includes many heartwarming and surprising anecdotes, along withcomments from fans, players and experts, and lots of photos. It also delves deeply into the social and economie issues surrounding the emotional Tiger Stadium controversy. Betzold's engaging andcolorful style brings alive the early days of baseball in Detroit, and captures the excitement of the high points of the ball club's long history. Time and time again, people in the book talk about the special magie that filis Tiger Stadium, a result of that rich heritage and the intímate feel of the park - theclosestseats in major league baseball. The various myths that the Tigers organization has put forth in attempting to get their way are carefully and thoroughly put to rest Is the stadium really falling down? Would a new stadium really bring more fans in? b it necessary tohave 12,000 parking spaces adjacent to a stadium? Is it legal to enact new taxes that would primarily affect people who can't vote on the issue? And if those taxes are insuffïcient, will local taxpayers be left holding the bag, as almost happened in 1971? Is there any way the Tigers can break their ironclad lease with the city, which prevents them from playing anywhere else till 2008? These issues and more are methodically explained, point by point. And if you've thought you've kept up on the situation by reading the papers and watching televisión, you will be surprised at the crucial information the mass media is choosing to ignore. This book has it all. Foi example, the problem often has been that the media has accepted what Bo Schembechler and others say at face value. This was illustrated last April, when Bo announced that half the seats in the stadium were obstructed view - about 20,000 more than had ever been admitted to. No one at the press conference questioned the validity of the figures, but the authors postúlate that they were based on the fact that anyone sitting higher than the posts could possibly miss the tiniest sliver of the action, for a split second. In recent years, there has been much discussion about those poles, which do obstruct some fans' views; but we are reminded that were it not for those despised posts, we would not have the spectacular views from the upper decks all around the stadium that we do. Several fans' stories of visiting the new Comiskey Park are recounted. The view there, unobstructed though it may be, is hard to imagine for those of us used to cozy Tiger Stadium. But the closest upper deck seats at Comiskey are farther away than the most remote seat in the upper deck here! The of t-repeated management mantra, 'Tiger Stadium is f alling down" has no basis in reality. According to the book, experts maintain that the old ballpark could remain standing indefinitely. And in light of what occurred in Chicago, that is not hard to believe. Fans there were also told that Comiskey Park was falling down, but when it came time for the wrecking ball, it took three months - to tear it half down! And longer to finish the job. After reading this book, one can have renewed hope that it's not too late to save Tiger Stadium, especially with thisbooknow availabletosettherecord straight. Meet the authors at a book release party Sunday, Dec. 8 from 3 -8 pm at the Soup Kuchen Saloon in Detroit. There will be a baseball triviacontest, ballparkfood, music byMike Ridley and big band sounds of the U-V-l Orchestra. Also, there will be a book signing at Litlle Professor in Ann Arbor Saturday, Dec. 7 from 2-4 pm. To order the book (and help support the efforts of the Tiger Stadium Fan Club), send check or nuo.for $14.95 paperbackor $25 hardcover to the TSFC (credit cards accepted). P.O. Box 441426, Detroit, Ml 48244-1426. Include $3 postage and handling for $10-$20 orders, $4 for orders over $20. Cali the TSFC at 964-5991 for more information. SAVE TIGER STADIUM! The Common Ground Coalition, a group of community organizations and leaders including the Tiger Stadium Fan Club, recently was successful in getting on the ballot. In March, voters in Wayne County will decide if the Detroit City Council will be forced to hold the Tigers to their lease. Also on the ballot will be a proposal to raise funds to build a new stadium through hotel, restaurant, and car rental taxes.