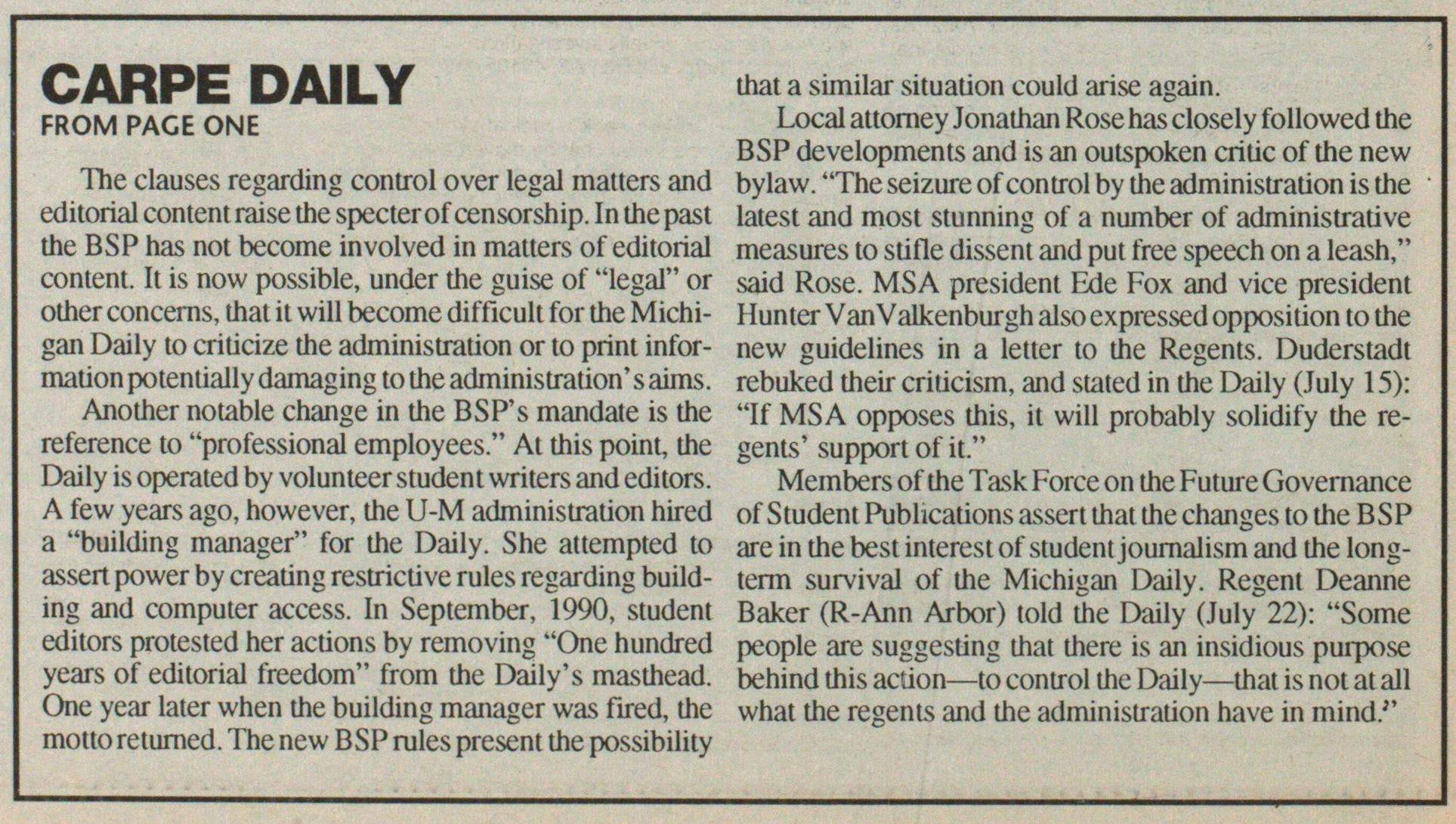 This summer, the rules regulating the Board for Student Publications (BSP) underwent sweeping changes. The BSP is the governing body for all non-technical student publications, including the Michigan Daily, the Michiganensian yearbook, and Gargoyle humor magazine. Under üie changed rules, student and faculty member positions, formerly selected by members of their respective groups, will be removed from the board. The changes, approved at Üie July 17 Regents' meeting, give U-M President James Duderstadt the power to appoint the first board under the new rules. The new BSP guidelines can only be viewed in the context of an era and climate of tightening U-M administration control over activities on campus. The changes to the BS P were set forth in a proposal by the Uni versity Task Force on the Future Govemance of Student Publications. The Task Force, chaired by Sociology Professor Gayl Ness, had among its members a representative from the Michigan Student Assembly (MSA) and former Daily editor, Noah Finkei . The Task Force met for üie past year and held two public hearings. Before the changes, üie BSP was comprised of 10 members. These included three students, üiree faculty members, three professional journalists and a faculty chair. The students (two undergraduates and one gradúate) were elected during student government elections. The faculty members were named and confirmed by Üie faculty senate, while üie faculty adviser was appointed by üie president from a panel of ñames submitted by üie faculty senate. The professional journalists were selected by Üie president, from a list of names submitted by editors of üie student publications. The new rules creat a nine-member board, including at least four alumni of student publications and at least three members of üie University community (including students, faculty, and staf f). All nine members of Üie initial board are to be appointed by President Duderstadt. Three members will serve year terms, Üiree will serve year terms, and Üiree will serve threeyear terms. The board selection process Üiereafter will involve nominations made by üie board (üiree new members a year, for three-year terms each), and will be subject to approval by the president. Other changes give Üie new BSP authority over üie student publications' legal affairs and mandate Üie BSP to act in an advisory capacity over matters of editorial control. Anoüier new BSP responsibility is üiat of adopting "position descriptions and supervisory procedures for professional employees." Members of Üie university community, including free speech advocates, MSA leaders and others, have expressed alarm over üie new BSPguidelines. The new, non-democratie board will only be accountable to üie president and not to Üie university community. Critics point to a pattern of control-grabbing actions by üie administration in recent years, including üie development and implementation of a Student Code of Academie Conduct and üie deputization of a U-M pólice force. Now üie president and regents have gained üie potential to add "control over student media" to üie list. (see CARPE DAILY, page 6) CARPE DAILY FROM PACE ONE The clauses regarding control over legal matters and editorial content raise the specter of censorship. In the past the BSP has not become involved in matters of editorial content. It is now possible, under the guise of "legal" or other concerns, that it will become difficult for the Michigan Daily to criticize the administration or to print information potentially damaging to the administration' s aims. Another notable change in the BSP's mandate is the reference to "professional employees." At this point, the Daily is operated by volunteer student writers and editors. A few years ago, however, the U-M administration hired a "building manager" for the Daily. She attempted to assert power by creaüng restrictive rules regarding building and computer access. In September, 1990, student editors protested her actions by removing "One hundred years of editorial freedom" from the Daily's masthead. One year later when the building manager was fired, the motto returned. The new BSP rules present the possibility that a similar situation could arise again. Local attomey Jonathan Rose has closely followed the BSP developments and is an outspoken critic of the new bylaw. "The seizure of control by the administration is the latest and most stunning of a number of administrative measures to stifle dissent and put free speech on a leash," said Rose. MSA president Ede Fox and vice president Hunter VanValkenburgh also expressed opposition to the new guidelines in a letter to the Regents. Duderstadt rebuked their criticism, and stated in the Daily (July 15): "If MSA opposes this, it will probably solidify the regents' support of it." Members of the Task Forcé on the Future Governance of Student Publications assert that the changes to the BSP are in the best interest of student joumalism and the longterm survival of the Michigan Daily. Regent Deanne Baker (R-Ann Arbor) told the Daily (July 22): "Some people are suggesting that there is an insidious puipose behind this action - to control the Daily - that is not at all what the regents and the administration have in mind.J'