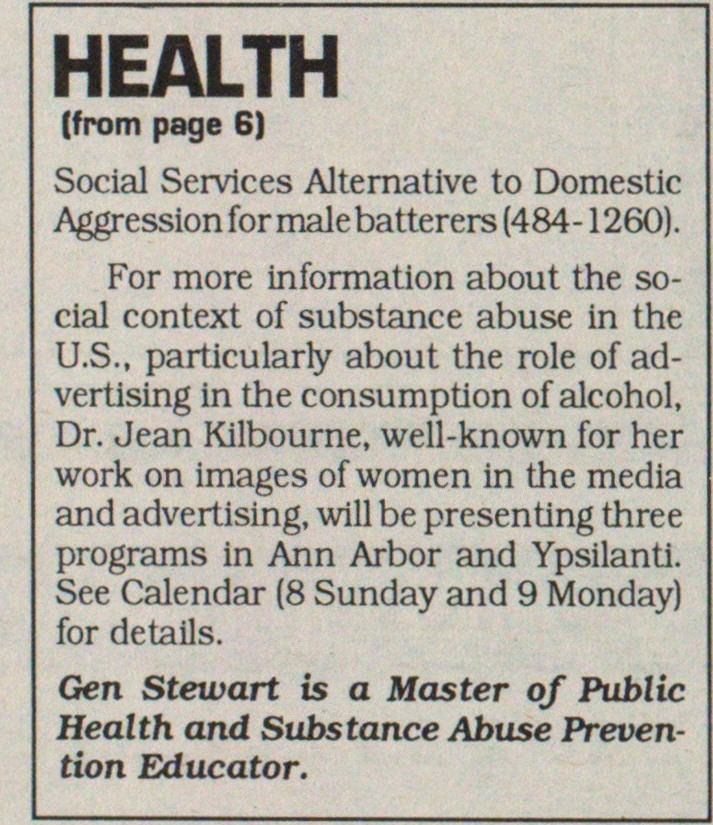 Q: A close friend of mine recently told me that she is worried about how much she has been drinking. Now that she has confided in me, I would like some more information about substance abuse, particularly as it affects women, and what I can do to support her.

A: You have already a demonstrated a great deal of support for your friend by beginning to educate yourself about substance abuse and special issues related for women. Most of what we know about substance abuse is based on studies done with men, but within the past six years or so an increasing body of research indicates that the issues for men and women who find themselves having trouble with alcohol are actually quite different.

While men who drink problematically say that they began to drink in order to get high or fit in with their social group, women tend to describe their problematic use of alcohol asa response to trauma in their lives, such as the breakup of a relationship; death of a family member; economic hardship; or the stress of dealing with pressures caused by sexism, racism, or homophobia. When these women seek professional assistance, their abuse of alcohol is often treated as a coping mechanism, rather than as a primary problem which needs attention.

It is considered acceptable by many clinicians to prescribe drugs to help women cope with anxiety and depression. This emphasis on medication for emotional pain is demonstrated by the fact that 70% of all prescriptions for antidepressants and 80% of all stimulants written in the U.S. are for women. While use of prescription drugs may help alleviate distress in the short run, they do nothing to address underlying issues. Furthermore, they significantly increase the potential for poly-drug addiction.

The abuse of alcohol is particularly dangerous for women because of the potential physical consequences. Although women tend to have shorter drinking histories than men, chronic alcohol abuse has a greater physical impact on women. This suggests that the effects of alcohol and other drugs are "telescoped" in women - that is, women are more severely affected by their use of alcohol and other drugs in a shorter period of time. Women who are alcoholics have death rates fifty to one hundred percent higher than male alcoholics. Women are also more likely to die from suicide, alcohol-related accidents, circulatory disorders or cirrhosis of the liver.

In addition to more severe physical consequences of their own drinking, women are seriously affected by the alcohol abuse of others. Alcohol is a factor in many, if not most, instances of domestic violence. Acquaintance rapes involve alcohol use in at least 75% of cases. Women may also be more negatively affected than men by experiences in families where there is parental alcohol abuse. Girls tend to be assigned more responsibilities in families than boys, and this sense of being responsible is exacerbated if one or both parents are incapacitated by their abuse of alcohol. This early dynamic gets played out later in life as nine out of ten women stay with alcohol abusing partners, while nine out of ten men leave their alcohol abusing partners. We can speculate that these secondary effects on women relate to low self-esteem; inequality experienced by women in society; and gender role development which teaches women that they are supposed to take care of others, often at the expense of their own emotional and physical health.

Many women who are having trouble with their use of substances say that being able to talk in an honest and open way with someone they trust is tremendously helpful. Giving up or cutting down one's alcohol intake is only one part of the healing process. It is important to explore underlying reasons for the substance abuse. For many women, this involves introspection as well as involvement in activities which increase self-esteem. Some women find that it is useful to participate in regularly scheduled substance-free social gatherings, to spend more time with their children, to begin meditating, or to engage in some other activity that allows them to connect with themselves and other people.

There are a number of support services in this area for women who are concerned about their use of alcohol. Many people find 12-step self-help programs useful. It is important to know that 12-step programs are based on a disease concept of alcoholism - that is, the belief that everyone who has problems with alcohol is addicted to it and must choose abstinence in order to "recover" from their addiction. In addition to the disease concept, 12-step programs tend to have a strong spiritual component and require a certain amount of faith in a "higher power." There are meetings of Alcoholics Anonymous (for individuals who are experiencing problems themselves), Al-Anon (for family and friends of people experiencing problems), and Adult Children of Alcoholics every day at different times in the Washtenaw County area. For information about times and places, call the Washtenaw Council on Alcoholism at 971-7900.

While many women find 12-step programs a tremendous source of strength, not all are comfortable with it. Women who already feel quite disempowered may find it difficult to give up even more power in the search for sobriety. An alternative is an organization called Women for Sobriety, which was developed to address some of the concerns that women have expressed about traditional 12-step programs.

For more information about Women for Sobriety, call (313)595-0366. Other resources of importance to women who are dealing with alcohol-related issues include SAFE House battered women's shelter (9955444, TDD), Assault Crisis Center for sexual assault (483-7273), and Catholic

For more information about the social context of substance abuse in the U.S., particularly about the role of advertising in the consumption of alcohol, Dr. Jean Kilbourne, well-known for her work on images of women in the media and advertising, will be presenting three programs in Ann Arbor and Ypsilanti. See Calendar (8 Sunday and 9 Monday) for details.

Gen Stewart is a Master of Public Health and Substance Abuse Prevention Educator.