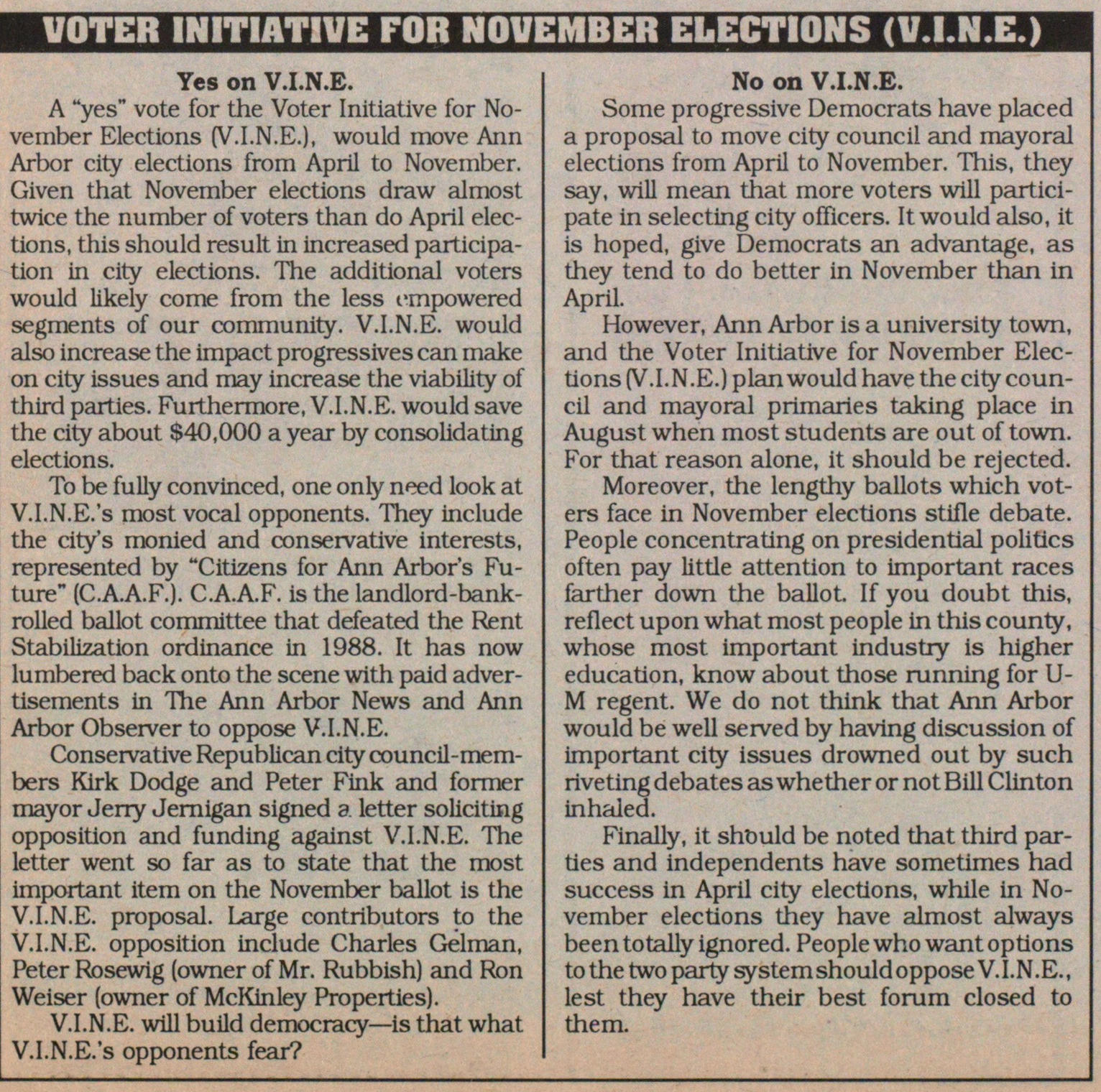 A "yes" vote for the Voter Initiative for November Elections (V.I.N.E.), would move Ann Arbor city elections from April to November. Given that November elections draw almost twice the number of voters than do April elections, this should result in increased participation in city elections. The additional voters would likely come from the less empowered segments of our community. V.I.N.E. would also increase the impact progressives can make on city issues and may increase the viability of third parties. Furthermore, V.I.N.E. would save the city about $40,000 a year by consolidating elections.

To be fully convinced, one only need look at V.I.N.E. 's most vocal opponents. They include the city's monied and conservative interests, represented by "Citizens for Ann Arbor's Future" (C.A.A.F.). C.A.A.F. is the landlord-bankrolled ballot committee that defeated the Rent Stabilization ordinance in 1988. It has now lumbered back onto the scene with paid advertisements in The Ann Arbor News and Ann Arbor Observer to oppose V.I.N.E.

Conservative Republican city council-members Kirk Dodge and Peter Fink and former mayor Jerry Jernigan signed a letter soliciting opposition and funding against V.I.N.E. The letter went so far as to state that the most important item on the November ballot is the V.I.N.E. proposal. Large contributors to the V.I.N.E. opposition include Charles Gelman, Peter Rosewig (owner of Mr. Rubbish) and Ron Weiser (owner of McKinley Properties).

Some progressive Democrats have placed a proposal to move city council and mayoral elections from April to November. This, they say, will mean that more voters will participate in selecting city officers. It would also, it is hoped, give Democrats an advantage, as they tend to do better in November than in April.

However, Ann Arbor is a university town, and the Voter Initiative for November Elections (V.I.N.E.) plan would have the city council and mayoral primaries taking place in August when most students are out of town. For that reason alone, it should be rejected.

Moreover, the lengthy ballots which voters face in November elections stifle debate. People concentrating on presidential politics often pay little attention to important races farther down the ballot. If you doubt this, reflect upon what most people in this county, whose most important industry is higher education, know about those running for U-M regent. We do not think that Ann Arbor would be well served by having discussion of important city issues drowned out by such riveting debates as whether or not Bill Clinton inhaled.

Finally, it should be noted that third parties and independents have sometimes had success in April city elections, while in November elections they have almost always been totally ignored. People who want options to the two party system should oppose V.I.N.E., lest they have their best forum closed to them.