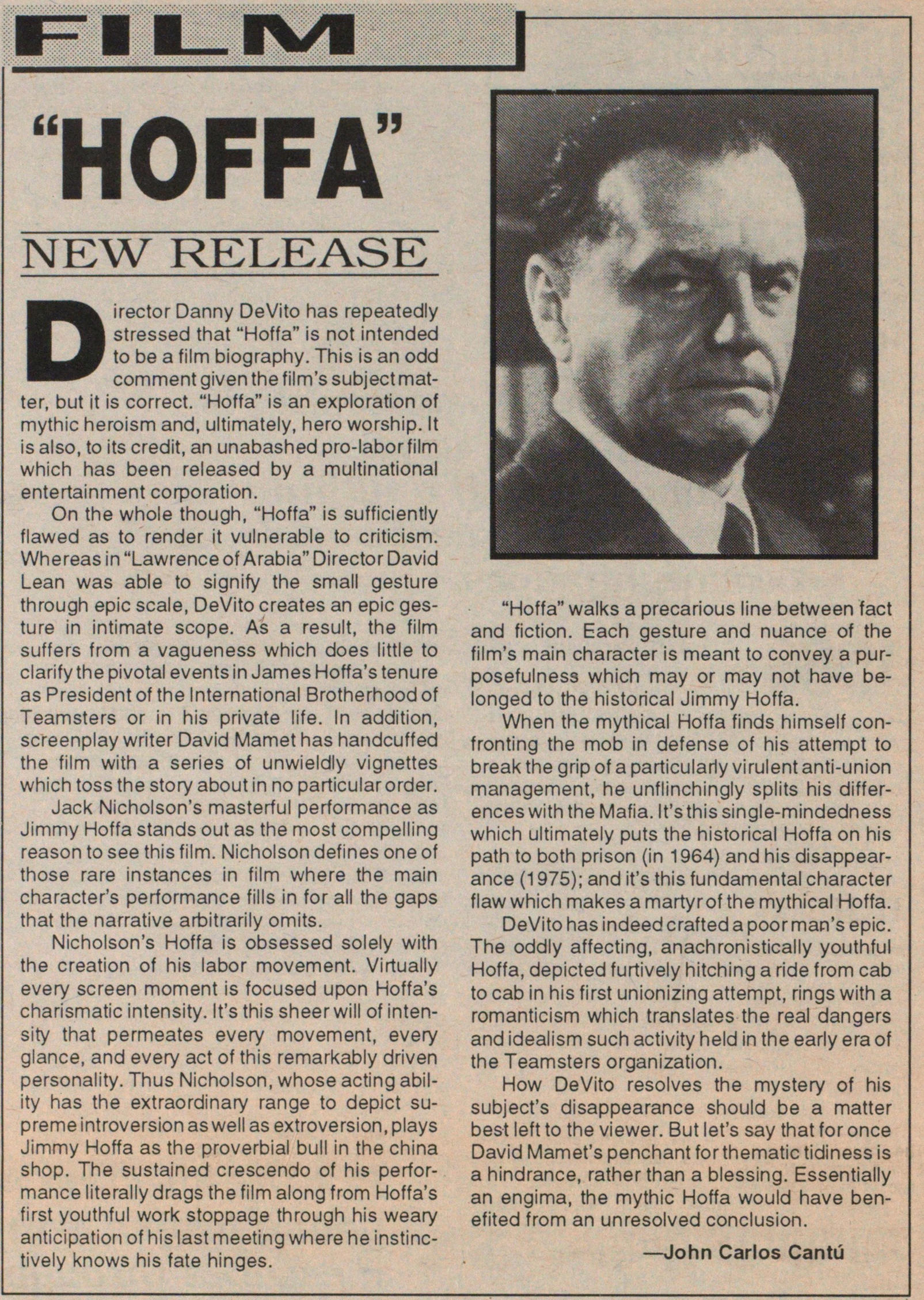 fii_ii r Director Danny DeVito has repeatedly stressed that "Hoffa" is not intended to be a film biography. This is an odd comment given the tilm's subject matter, but it is correct. "Hoffa" is an exploration of mythic heroism and, ultimately, hero worship. It is also, to its credit, an unabashed pro-laborfilm which has been released by a multinational entertainment Corporation. On the whole though, "Hoffa" is sufficiently flawed as to render it vulnerable to criticism. Whereas in "Lawrence of Arabia" Director David Lean was able to signify the small gesture through epic scale, DeVito creates an epic gesture in intímate scope. As a result, the film suffers from a vagueness which does little to clarify the pivotal events in James Hoffa's tenure as President of the International Brotherhood of Teamsters or in his private life. In addition, screenplay writer David Mamet has handcuffed the film with a series of unwieldly vignettes which toss the story about in no particular order. Jack Nicholson's masterful performance as Jimmy Hoffa stands out as the most compelling reason to see this film. Nicholson defines one of those rare instances in film where the main character's performance filis in for all the gaps that the narrative arbitrarily omits. Nicholson's Hoffa is obsessed solely with the creation of his labor movement. Virtually every screen moment is focused upon Hoffa's charismatic intensity. It's this sheer will of intensity that permeates every movement, every glance, and every act of this remarkably driven personality. Thus Nicholson, whose acting ability has the extraordinary range to depict supreme introversión as well as extraversión, plays Jimmy Hoffa as the proverbial buil n the china shop. The sustained crescendo of his performance literally drags the film along from Hoffa's first youthful work stoppage through his weary anticipation of his last meeting where he instinctively knows his fate hinges. "Hoffa" walks a precarious line between fact and fiction. Each gesture and nuance of the film's main character is meant to convey a purposefulness which may or may not have beionged to the historical Jimmy Hoffa. When the mythical Hoffa finds himself confronting the mob in defense of his attempt to break the grip of a particularly virulent anti-union management, he unflinchingly splits his differences with the Mafia. It's this single-mindedness which ultimately puts the historical Hoffa on his path to both prison (in 1964) and his disappearance (1 975); and it's this fundamental character flaw which makes a martyrof the mythical Hoffa. DeVito has indeed crafted a poor man's epic. The oddly affecting, anachronistically youthful Hoffa, depicted furtively hitching a ride from cab to cab in his first unionizing attempt, rings with a romanticism which translates the real dangers and idealism such activity held in the early era of the Teamsters organization. How DeVito resolves the mystery of his subject's disappearance should be a matter best left to the viewer. But let's say that for once David Mamet's penchant for thematic tidiness is a hindrance, ratherthan a blessing. Essentially an engima, the mythic Hoffa would have benefited from an unresolved conclusión.