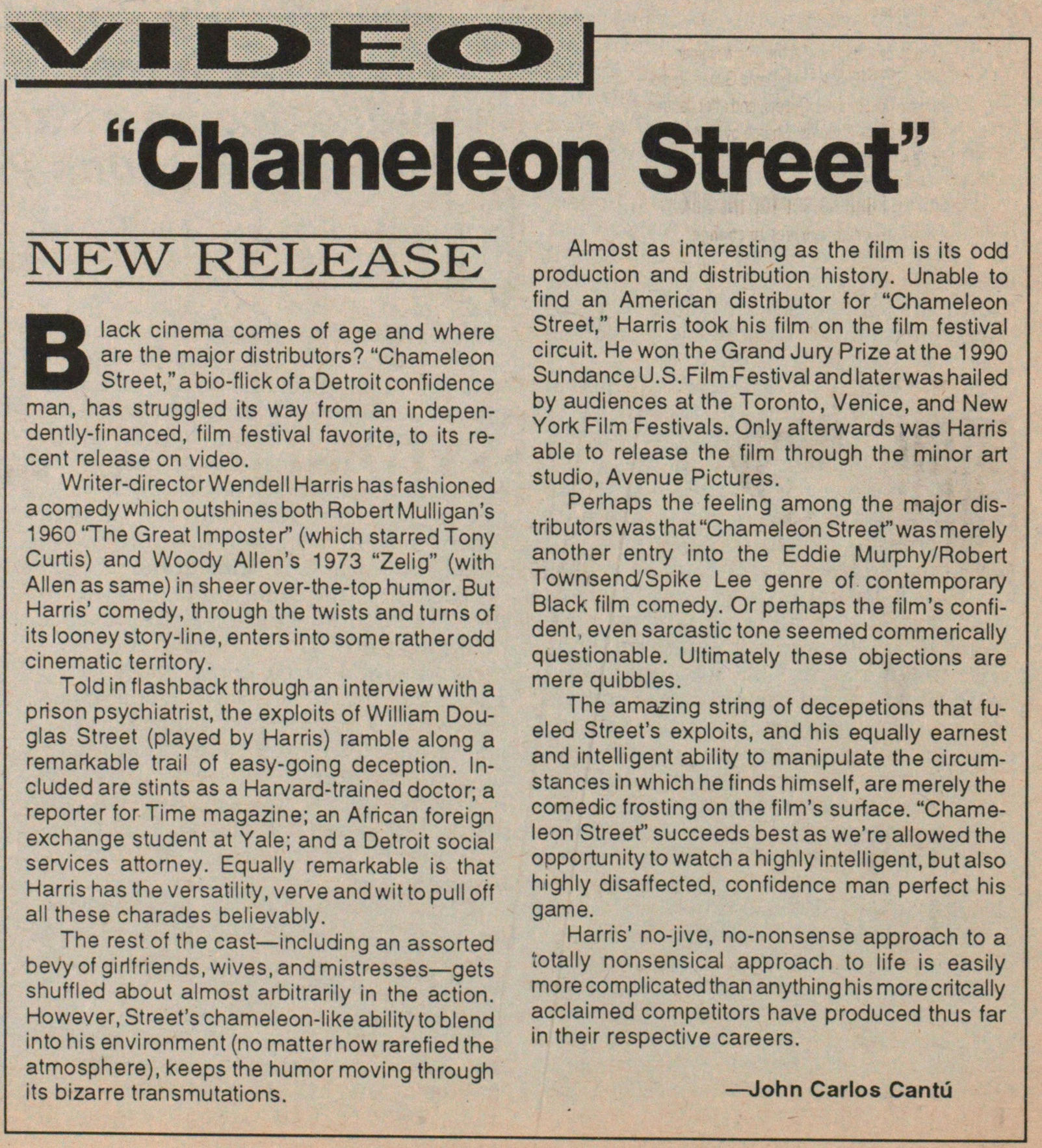 XIPEZ I Black cinema comes of age and where are the major distributors? "Chameleon Street," a bio-flick of a Detroit confidence man, has struggled its way from an independently-financed, film festival favorite, to its recent release on video. Writer-directorWendell Harris hasfashioned acomedywhichoutshinesbothRobertMulligan's 1 960 'The Great Imposter" (which starred Tony Curtís) and Woody Allen's 1973 "Zelig" (with Alien as same) in sheerover-the-top humor. But Harris' comedy, through the twists and tums of its looney story-line, enters into some ratherodd cinematic territory. Told in flashback through an interview with a prison psychiatrist, the exploits of William Douglas Street (played by Harris) ramble along a remarkable trail of easy-going deception. Included are stints as a Harvard-trained doctor; a reporter forTíme magazine; an African foreign exchange student at Yale; and a Detroit social services attorney. Equally remarkable is that Harris has the versatility, verve and wit to pull off all these charades believably. The rest of the cast - including an assorted bevy of girlfriends, wives, and mistresses - gets shuffled about almost arbitrarily in the action. However, Street's chameleon-like ability to blend into his environment (no matter how rarefied the atmosphere), keeps the humor moving through its bizarre transmutations. Almost as nteresting as the film is its odd production and distribution history. Unable to find an American distributor for "Chameleon Street," Harris took his film on the film festival circuit. He won the Grand Jury Prize at the 1990 Sundance U.S. Film Festival and later was hailed by audiences at the Toronto, Venice, and New York Film Festivals. Only afterwards was Harris able to release the film through the minor art studio, Avenue Pictures. Perhaps the feeling among the major distributorswasthat "Chameleon Streef was merely another entry into the Eddie MurphyRobert TownsendSpike Lee genre of contemporary Black film comedy. Or perhaps the film's confident, even sarcastic tone seemed commerically questionable. Ultimately these objections are mere quibbles. The amazing string of decepetions that fueled Street's exploits, and his equally earnest and intelligent ability to manipúlate the circumstances in which he finds himself, are merely the comedie frosting on the film's surface. "Chameleon Streef' succeeds best as we're allowed the opportunity to watch a highly intelligent, but also highly disaffected, confidence man perfect his game. Harris' no-jive, no-nonsense approach to a totally nonsensical approach to life is easily more complicated than anything his more critcally acclaimed competitors have produced thus far in their respective careers.