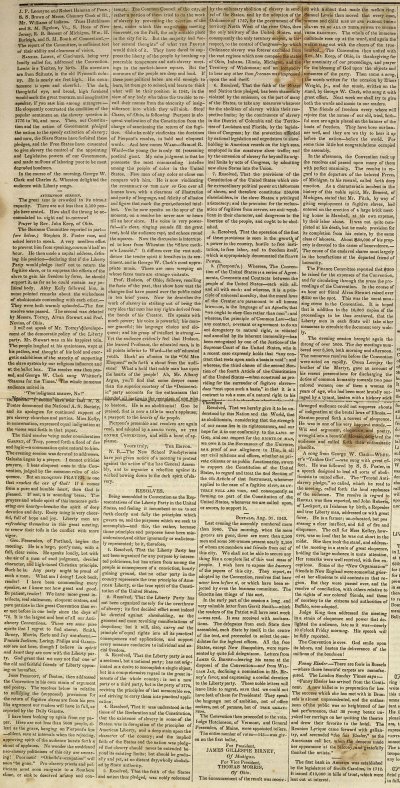 About5 o'clock P. M. on Tuesday, we eached BuQJlo, and foundit already thronged vith the deleg-ates from the various Stntes rom Mame to Illinois. We could not help:antrasting with feelings of gratitude and exiltation, the dark day of April 1840, with this 3ay of glory. In the evening over 150, from 10 different States, assembled for familiar bo:ial conversation in regard to the state of the :ause. From every part of the land the most 3heerinnr news was given. In the moming mother familiar meeting of friends, preceded ly a meeting for prayer,took place at 9 o'clockr ivhich confirmed the impressions of our evening Bession. I will not speak of the name af friends now. You will fina a roll of the 3elegates with my to-morrow's letter. Print it, and let the people see what sort of men constitute the elite of Liberty's galheiinghosts, Such men are not to be conquered - Whatever they attempt will be accommjshed. At 10 o'clock, Alvan Stewart, Esq., Chairman of the Liberty National Committee.callcd the meeting to order in the great TENT" re of the city. It ia more than 1 00 feet iniameter. Seats are provided for about SOCO ersons, and they are filled at this opening ses ion! There must be more than 1000 delerates now here. Large numbera more wilh ome in a few hours . Mr. Stewart made a few forcible remarks, ongratulating the Convention on the progresa f o'ir prbciples. After prayer, by the Rev. tfr. Snyder, of Monroe Co., a Committee on !omiiiation8 was appointed, eonsieting of 8 P. Chase, Esq. of Ohio, Chairman, R. B. Bement of Michigan, Dr. Lemoyne of Pennsy!anin, Owen Lovejoy of Illinois, Williams of ndiai:a, Asa of Maine, Henry B-. Stanton of Massachusetts, Elijah Miller of Vermont, S. M. Booth of Conn., Schuyler loes of New Jersey, H. Dresser, Esq. and Henry H. Garnett, of New York. While hey were absent, on motion of W. L. Chap-in of N. Y., the following resolve was unanmpusly adopted. Resolved, That in voting on the selection of candidates for the Presidency and Vice ?residency, each State be entitled to as many delegates as she has members of the Electoral College, and that the delegations fronv State be requested to desÃ­gnate persons to act m behalf of those disiricts not represented: especially appointed for that purpose, and to desÃ­gnate two delegates at large from their respective States. Thissettled the question of the mode of voting on the great business of the meeting. The Committee on Nominations reported a folio ws:For President. LEICESTER KING, of Ohio, Fvr Vice President. Gen. Samuel Fessenden of Maine, Judge TitÃ¼s HÃ¼TCHi.xsoÃ¯f of Vermoni, Hon. Willjam Jacksojs of MassachuBett?, Judge Thomas C. Love of New York, Samukl McFarlakd of Pennsylvania, Samuel Lewis Ksq. of Ohio, Dr. Charles V. Dyer of Illinois, Wm. H. Burleigh Esq. of Connecticut, For Secretarles. LiNNAEus P. Noble of New York, Elizur Wright, jr. of Mass., Charles B. Rat of New York, Owen Lovejoy of 111., Timothy B. HÃ¼dson of Ohio. JudÃ¼k Kikg, ou being introduced to the meeting, made a brief and excellent address, congratulaling us on tho aspects of the cause and of the meeting. Judge King is rather a short man, but large frame and he?.d, with a broad, comraandiDg forehead. His voice is tenor, f 11 and sweet. He presides vvith great dignity and efficiency. A Business Committee was cliosen, consisting of Alvan Stewart, Wm. L. Chaplin, Wm. GoÃ¼dcll, S. P. Chase, and H. C. Taylor, of Ohio; Henry B. Stanton of JMassachusetts;