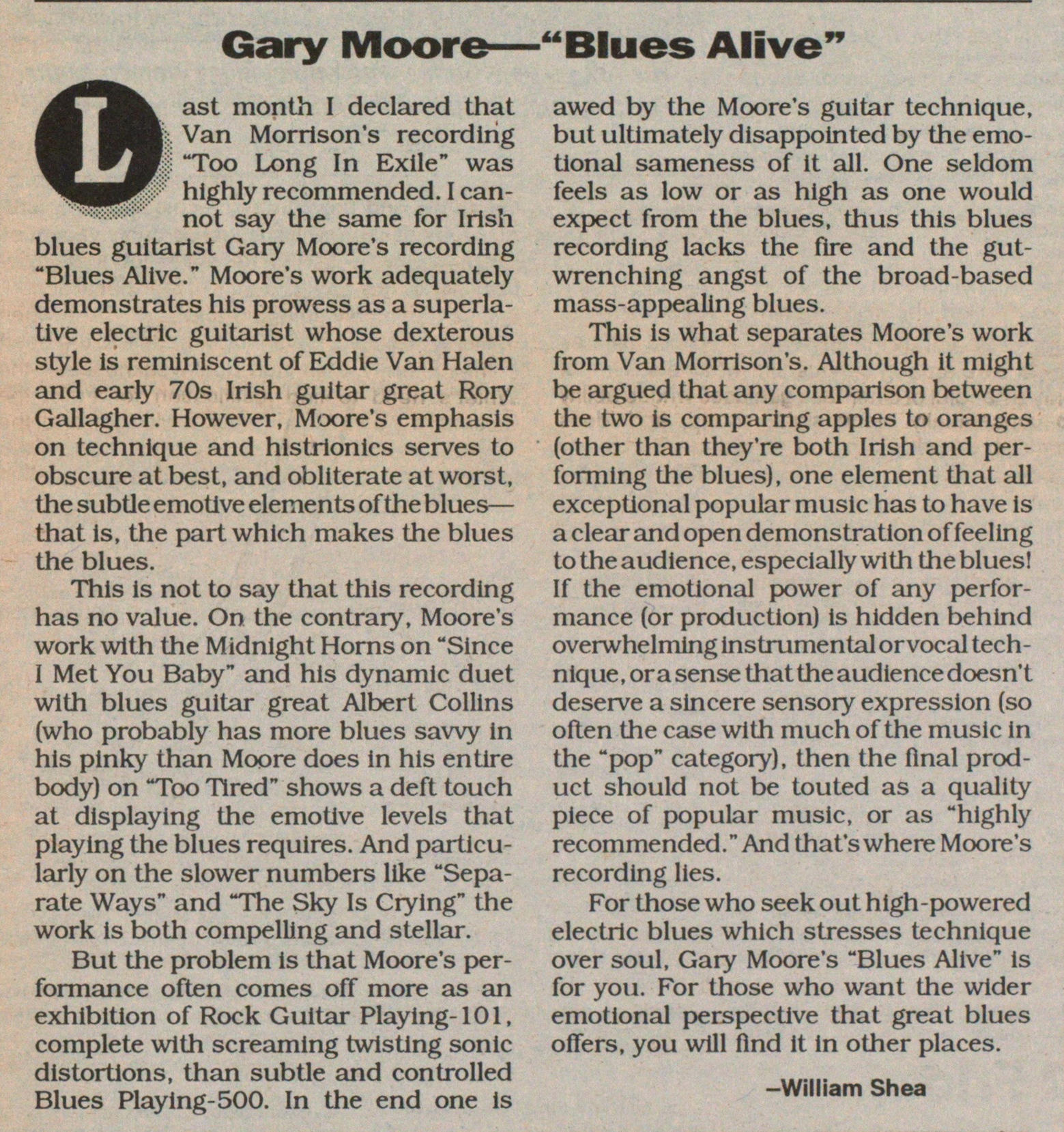 O ast month I declared that . Van Morrison's recordirig I Too Long In Exile" was hlghly recommended. I cannot say the same for Irish blues guitarist Gary Moore's recording "Blues Alive." Moore's work adequately demonstrates his prowess as a superlatlve electric guitarist whose dexterous style Ís remlnlscent of Eddie Van Halen and early 70s Irlsh gultar great Rory Gallagher. However, Moore's emphasls on technlque and histrionics serves to obscure at best, and oblitérate at worst, the subUe emotlve elements of the blues - that is, the part which makes the blues the blues. This is not to say that this recording has no valué. On the contrary, Moore's work with the Midnight Horns on "Since 1 Met You Baby" and his dynamic duet with blues guitar great Albert Collins (who probably has more blues sawy in his pinky than Moore does in his en tire body) on Too Tlred" shows a deft touch at displaying the emotive levéis that playing the blues requires. And partlcularly on the slower numbers like "Separate Ways" and The Sky Is Crying" the work is both compelling and stellar. But the problem is that Moore's performance often comes off more as an exhibition of Rock Guitar 101, complete with screaming twisting sonlc distortions, than subtle and con trolled Blues 500. In the end one Is awed by the Moore's guitar technique, but ultimately disappointed by the emotional sameness of it all. One seldom feels as low or as high as one would expect from the blues, thus this blues recording lacks the fïre and the gutwrenching angst of the broad-based mass-appealing blues. This is what separates Moore's work from Van Morrison's. Although it might be argued that any comparison between the two is comparing apples to oranges (other than they're both Irish and performing the blues), one element that all exceptional popular music has to have is a clear and open demonstration of feeling to the audience.especiallywith the blues! If the emotional power of any performance (or production) is hidden behind overwhelming instrumental orvoc al technique, orasensethattheaudiencedoesn't deserve a sincere sensory expression (so often the case with much of the music in the "pop" category), then the final product should not be touted as a quality piece of popular music, or as "highly recommended." And that'swhere Moore's recording lies. For those who seek out high-powered electric blues which stresses technique over soul, Gary Moore's "Blues Alive" is for you. For those who want the wider emotional perspective that great blues offers, you will flnd it in other places.