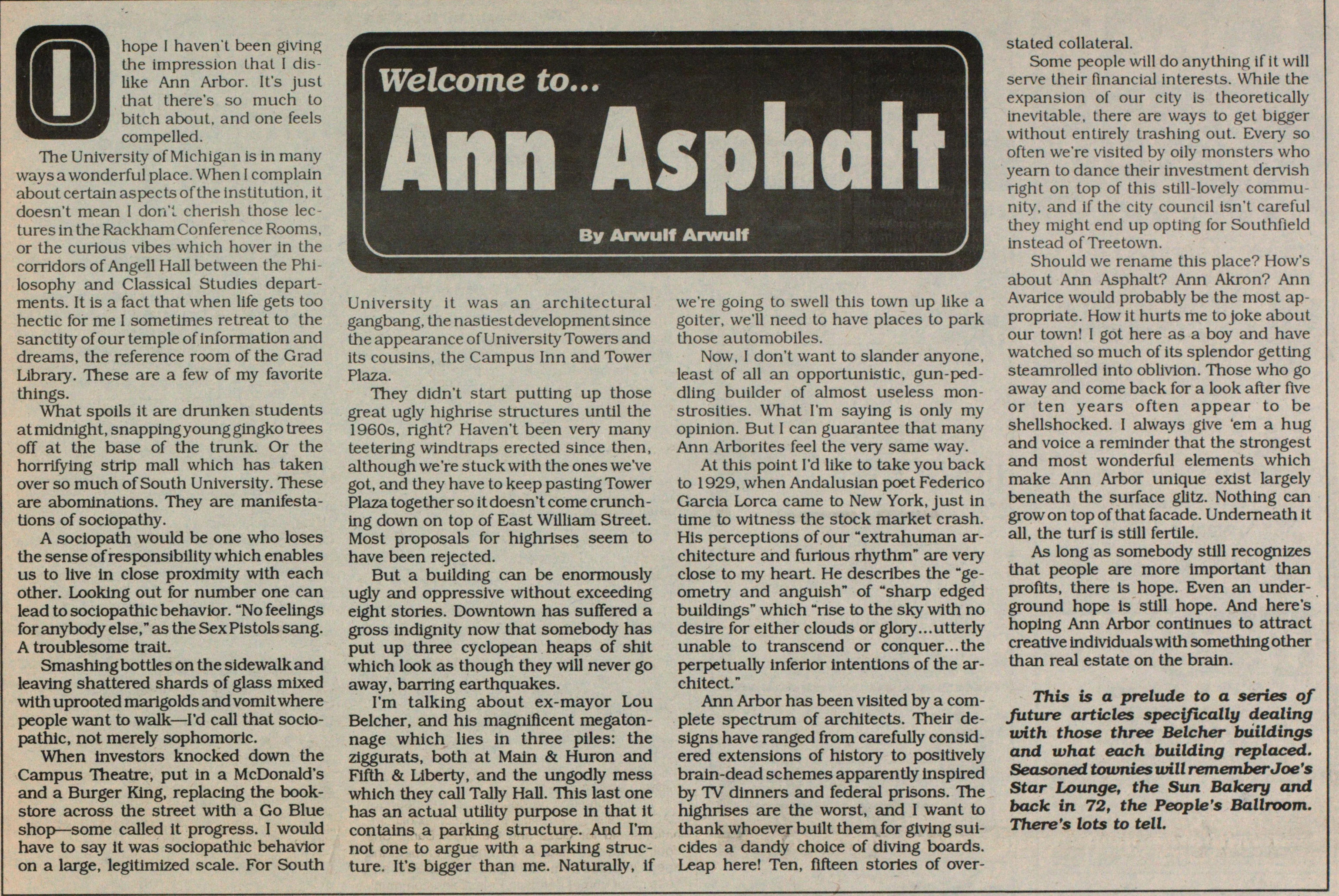 O hope I havent been giving the impression that I dis like Ann Arbor. It's just that there's so much to bitch about, and one feels compelled. The Unlversity of Michigan is In many ways a wonderful place. When I complain about certaln aspects of the institution, it doesn't mean I don'! cherish those lectures in the Rackham Conference Rooms, or the curious vlbes which hover in the corridors of Angelí Hall between the Philosophy and Classical Studies departments. It is a fact that when life gets too hectic for me 1 sometimes retreat to the sanctity of our temple of Information and dreams, the reference room of the Grad Library. These are a few of my favorite things. What spoils it are drunken students atmidnight, snappingyounggingko trees off at the base of the trunk. Or the horrifying strip mail which has taken over so much of South University. These are abominations. They are manifestations of sociopathy. A sociopath would be one who loses the sense of responsibillty which enables us to live in close proximity with each other. Looking out for number one can lead to sociopathic behavior. "No feelings for anybody else," as the SexPlstols sang. A troublesome trait. Smashingbottles on the sidewalkand leaving shattered shards of glass mixed with uprootedmarigolds and vomitwhere people want to walk - I'd cali that sociopathic, not merely sophomoric. When investors knocked down the Campus Theatre, put in a McDonald's and a Burger King, replacing the bookstore across the street with a Go Blue shop - some called it progress. I would have to say it was sociopathic behavior on a large, legitimized scale. For South University it was an archltectural gangbang, the nastiestdevelopmentsince the appearance of University Towers and its cousins, the Campus Inn and Tower Plaza. They didn't start putting up those great ugly highrise structures until the 1960s, right? Haven't been very many teetering windtraps erected since then, although we 're stuck with the ones we've got, and they have to keep pasting Tower Plaza together so itdoesn't come crunching down on top of East William Street. Most proposals for highrises seem to have been rejected. But a building can be enormously ugly and oppressive without exceeding eight stories. Downtown has suffered a gross indignity now that somebody has put up three cyclopean heaps of shit which look as though they wlll never go away, barring earthquakes. I'm talklng about ex-mayor Lou Belcher, and hls magniflcent megatonnage which lies in three piles: the ziggurats, both at Main & Hurón and Flfth & Liberty, and the ungodly mess which they cali Tally Hall. This last one has an actual utility purpose in that it contains a parking structure. And I'm not one to argüe with a parking structure. It's bigger than me. Naturally, if we're going to swell this town up like a goiter, we'U need to have places to park those automobiles. Now, I don't want to slander anyone, least of all an opportunistic, gun-peddling builder of almost useless monstrosities. What I'm saying is only my opinión. But I can guarantee that many Ann Arborites feel the very same way. At this point I'd like to take you back to 1929, when Andalusian poet Federico Garcia Lorca carne to New York, just in time to witness the stock market crash. His perceptions of our "extrahuman architecture and furious rhythm" are very close to my heart. He describes the "geometry and anguish" of "sharp edged buildings" which "rise to the sky with no desire for either clouds or glory...utterly unable to transcend or conquer...the perpetually inferior intentlons of the architect." Ann Arbor has been vlsited by a complete spectrum of architects. Their designs have ranged from carefully considered extensions of history to positlvely brain-dead schemes apparently inspired by TV dinners and federal prisons. The highrises are the worst, and I want to thank whoever built them for giving suicides a dandy cholee of divlng boards. Leap here! Ten, fifteen storles of stated collateral. Some people will do any thing if it wlll serve their financia] interests. While the expansión of our city is theoretically inevitable, there are ways to get bigger without entirely trashing out. Every so often we're visited by oily monsters who yearn to dance their investment dervish right on top of this stlll-lovely community, and if the city council isn't careful they mlght end up opting for Southfield instead of Treetown. Should we rename this place? How's about Ann Asphalt? Ann Akron? Ann Avarice would probably be the most appropriate. How it hurts me to joke about our town! I got here as a boy and have watched so much of its splendor getting steamrolled into oblivion. Those who go away and come back for a look after flve or ten years often appear to be shellshocked. I always give 'em a hug and voice a remlnder that the strongest and most wonderful elements which make Ann Arbor unique exlst largely beneath the surface glltz. Nothing can growon top of that facade. Undemeath it all, the turf is süll fertlle. As long as somebody stlll recognlzes that people are more important than proflts, there is hope. Even an underground hope is still hope. And here's hoping Ann Arbor continúes to attract creative individuals with somethingother than real estáte on the braln. This is a prelude to a series of future articles specifically dealing with those three Belcher buildings and xvhat each building replaced. Seasoned townies will rememberJoe's Star Lounge, the Sun Bakery and back in 72, the People's Ballroom. There's lots to teil.