The Huron River Runs Through It 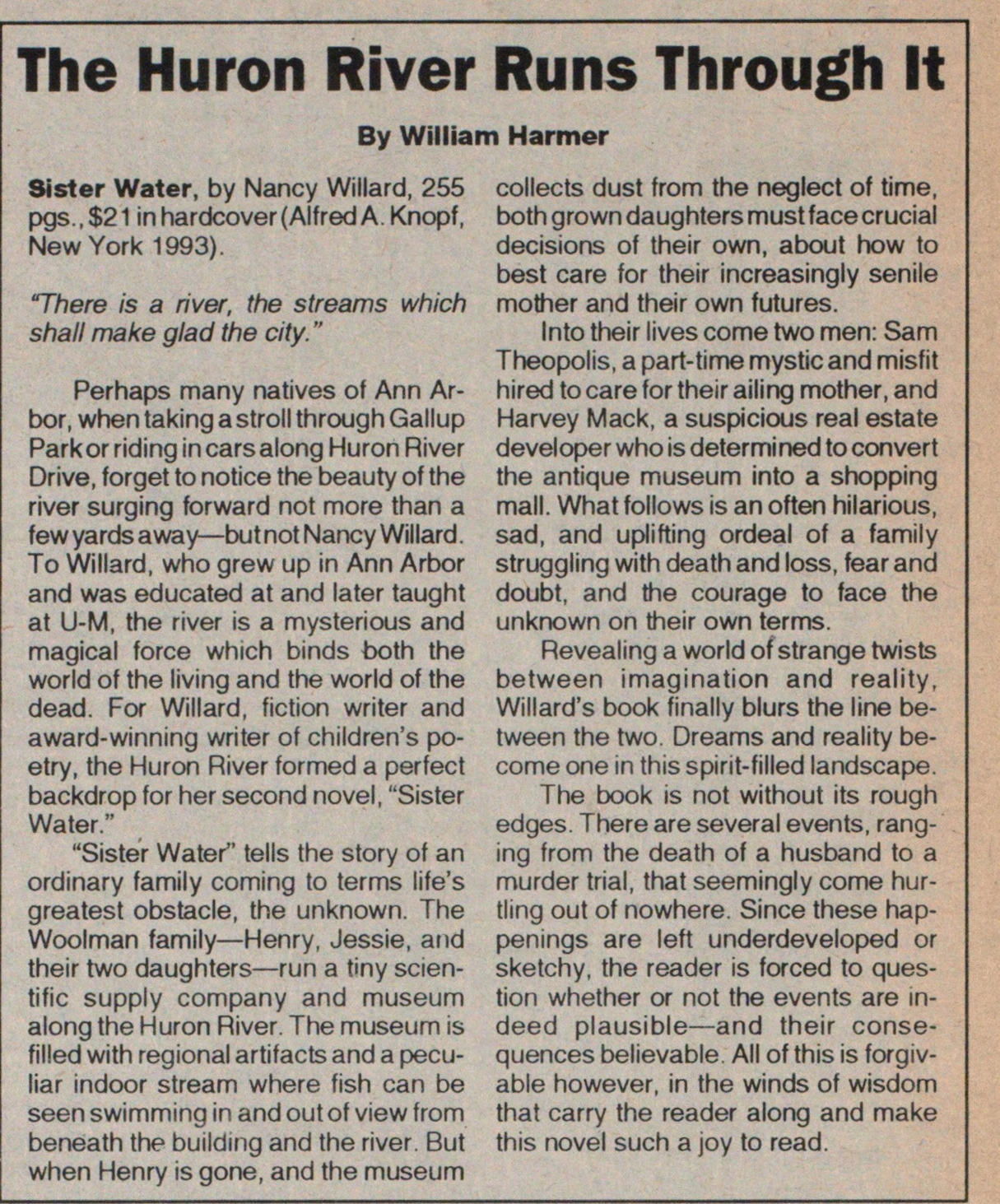 Sister Water, by Nancy Willard, 255 pgs.,$21 inhardcover(AlfredA Knopf, New York 1993). "There is a river, the streams which shall make glad the city." Perhaps many natives of Ann Arbor, when taking a stroll through Gallup Parkor riding in cars along Huron River Drive, forget to notice the beauty of the river surging forward not more than a fewyardsaway - butnot Nancy Willard. To Willard, who grew up in Ann Arbor and was educated at and later taught at U-M, the river is a mysterious and magical force which binds both the world of the living and the world of the dead. For Willard, fiction writer and award-winning writer of children's poetry, the Huron River formed a perfect backdrop for her second novel, "Sister Water." "Sister Water" tells the story of an ordinary family coming to terms life's greatest obstacle, the unknown. The Woolman family - Henry, Jessie, and their two daughters - run a tiny scientific supply company and museum along the Huron River. The museum is filled with regional artifacts and a peculiar indoor stream where fish can be seen swimming in and out of view f rom beneath the building and the river. But when Henry is gone, and the museum collecte dust from the neglect of time, both grown daughters must face crucial decisions of their own, about how to best care for their ncreasingly senile mother and their own futures. Into their lives come two men: Sam Theopolis, a part-time mystic and misfit hired to care for their ailing mother, and Harvey Mack. a suspicious real estáte developer who is determined to convert the antique museum into a shopping mail. What follows is an often hilarious, sad, and uplifting ordeal of a family struggling withdeath and loss, fear and doubt, and the courage to face the unknown on their own terms. Revealing a world of strange twists between imagination and reality, Willard's book finally blurs the line between the two. Dreams and reality become one in this spirit-filled landscape. The book is not without its rough edges. There are several events, ranging from the death of a husband to a murder trial, that seemingly come hurtling out of nowhere. Since these happenings are left underdeveloped or sketchy, the reader is forced to question whether or not the events are indeed plausible - and their consequences believable All of this is forgivable however, in the winds of wisdom that carry the reader along and make this novel such a joy to read.