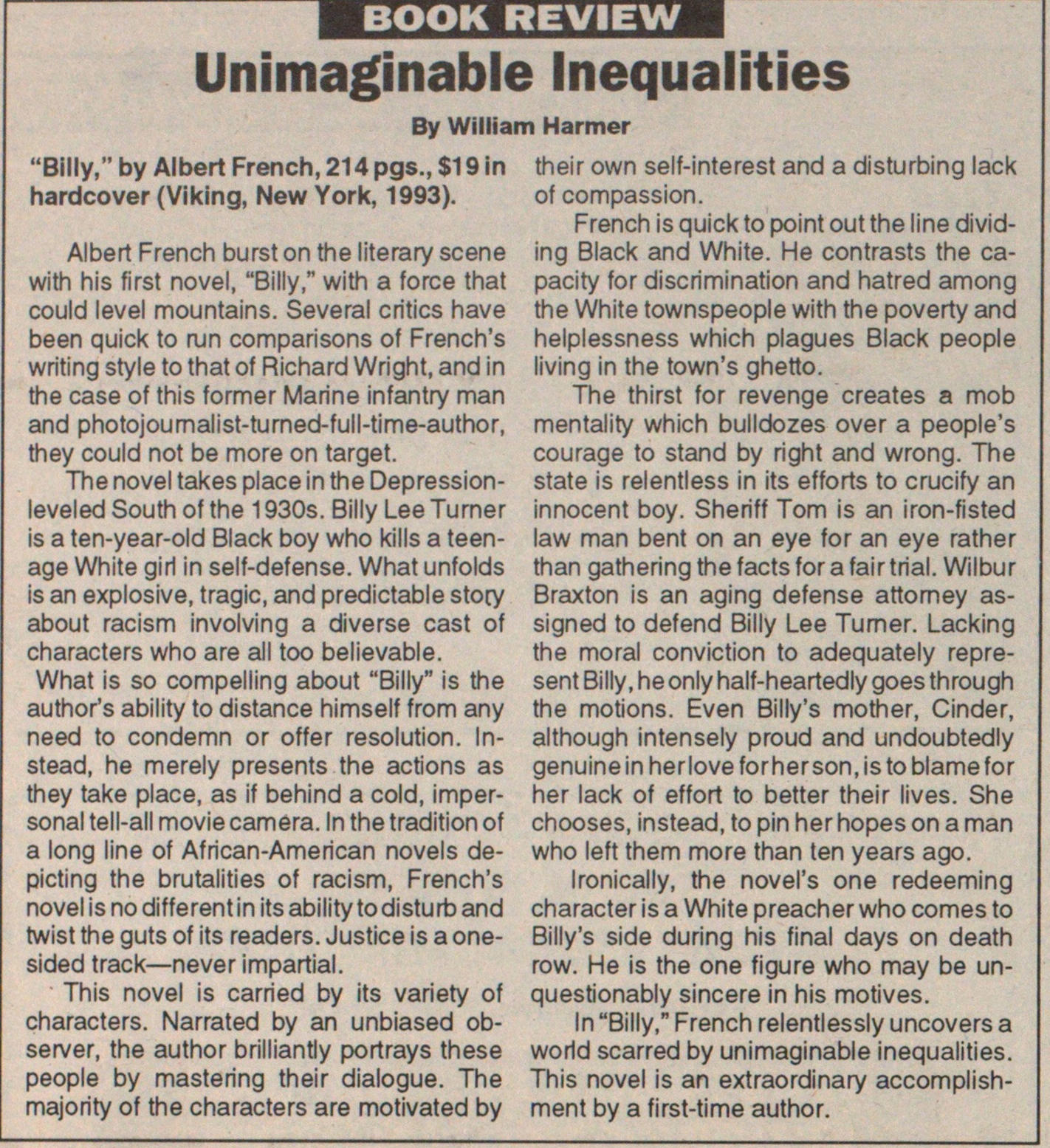 :tIK =4Ti I VM "Billy, " by Albert French, 21 4 pgs., $1 9 in hardcover (Viking, New York, 1993). Albert French burst on the literary scène with his first novel, "Billy," with a forcé that could level mountains. Several critics have been quick to run comparisons of French's writing style to that of Richard Wright, and in the case of this former Marine infantry man and photojoumalist-turned-full-time-author, they could not be more on target. The novel takes place in the Depressionleveled South of the 1 930s. Billy Lee Turner is a ten-year-old Black boy who kills a teenage White girl in self-defense. What unfolds is an explosive, tragic, and predictable story about racism involving a diverse cast of characters who are all too believable. What is so compelling about "Billy" is the author's ability to distance himself from any need to condemn or offer resolution. Instead, he merely presents the actions as they take place, as if behind a cold, impersonal teil-all movie camera. In the tradition of a long line of African-American novéis depicting the brutalities of racism, French's novel s no different in its ability to disturb and twist the guts of its readers. Justice is a onesided track - never mpartlal. This novel s carried by its variety of characters. Narrated by an unbiased observer, the author brilliantly portrays these people by mastering their dialogue. The majority of the characters are motivated by their own self-interest and a disturbing lack of compassion. French is quick to point out the line dividing Black and White. He contrasts the capacity for discrimination and hatred among the White townspeople with the poverty and helplessness which plagues Black people living in the town's ghetto. The thirst for revenge creates a mob mentality which bulldozes over a people's courage to stand by right and wrong. The state is relentless in its efforts to crucify an innocent boy. Sheriff Tom is an iron-fisted law man bent on an eye for an eye rather than gathering the facts for a fair trial. Wilbur Braxton is an aging defense attomey assigned to defend Billy Lee Turner. Lacking the moral conviction to adequately represent Billy, he only half-heartedly goes through the motions. Even Billy's mother, Cinder, although intensely proud and undoubtedly genuine in herlove forher son, is to blame for her lack of effort to better their lives. She chooses, instead, to pin her hopes on a man who left them more than ten years ago. Ironically, the novel's one redeeming character is a White preacher who comes to Billy's side during his final days on death row. He is the one figure who may be unquestionably sincere in his motives. In "Billy," French relentlessly uncovers a world scarred by unimaginable inequalities. This novel is an extraordinary accomplishment by a first-time author.