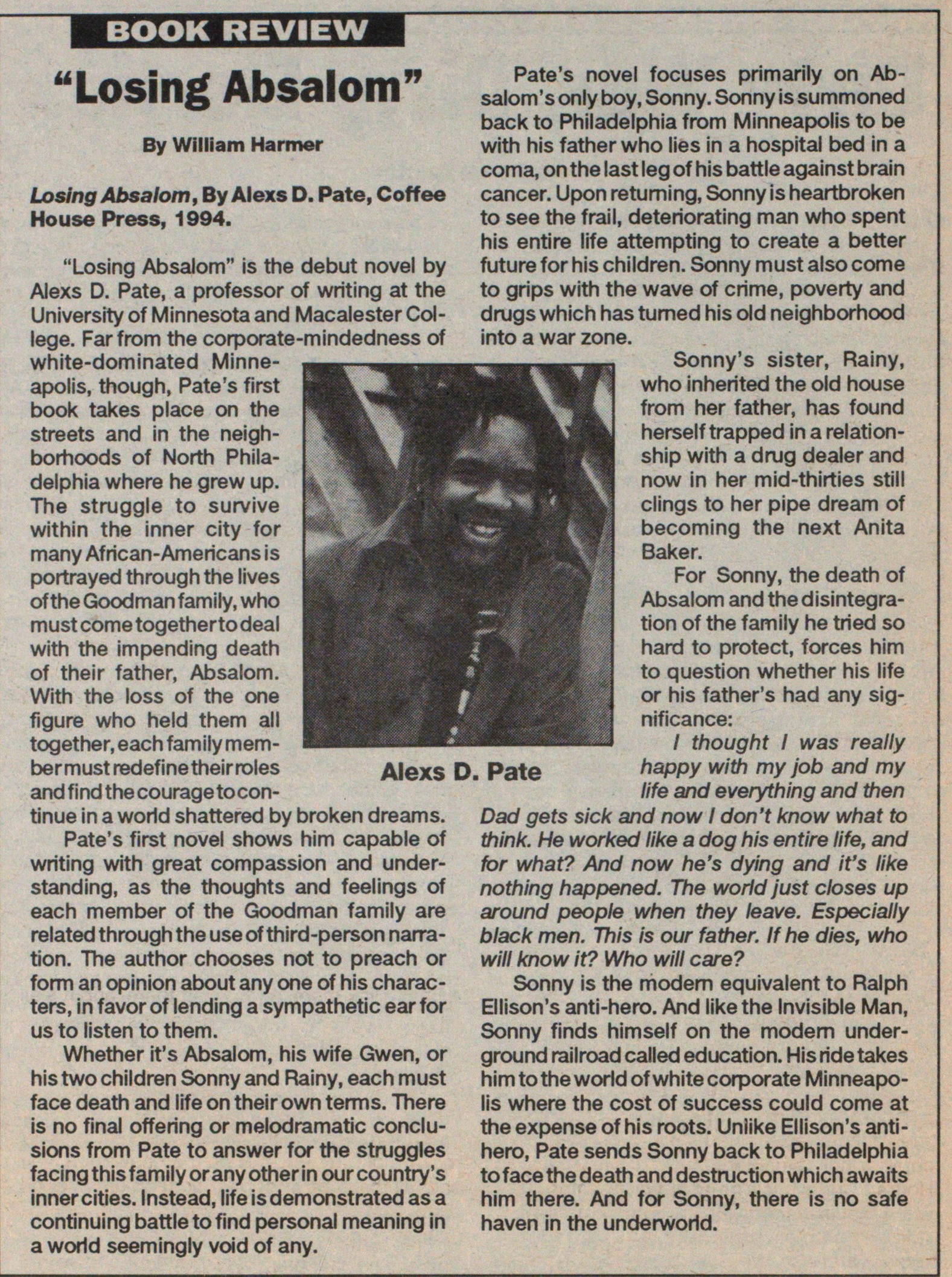 W--M'!!rJ:4Tii4'T Losing Absalom, By Alexs D. Pate, Coff ee House Press, 1994. "Losing Absalom" is the debut novel by Alexs D. Pate, a professor of writing at the Uni versity of Minnesota and Macalester College. Farfrom the corporate-mindedness of white-dominated Minneapolis, though, Pate's first book takes place on the streets and in the neighborhoods of North Philadeiphia where he grew up. The struggle to survive within the inner city for many Af rican-Americans is portrayed through the lives of the Goodman family, who must come togetherto deal with the impending death of their father, Absalom. With the loss of the one figure who held them all together, each family member must redef ine their roles and f i nd the courage to tinue n a world shattered by broken dreams. Pate's first novel shows him capable of writing with great compassion and understanding, as the thoughts and feelings of each member of the Goodman family are related through the use of third-person narra - tion. The author chooses not to preach or form an opinión about any one of his characters, in favor of lending a sympathetic ear for us to listen to them. Whether it's Absalom, his wife Gwen, or his two children Sonny and Rainy , each must face death and life on their own terms. There is no final offering or melodramatic conclusions from Pate to answer for the struggles facing this family or any other in our country 's inner cities. Instead, life isdemonstrated as a continuing battle to find personal meaning in a world seemingly void of any. Pate's novel focuses primarily on Absalom's only boy, Sonny. Sonny is summoned back to Philadelphia f rom Minneapolis to be with his father who lies in a hospital bed in a coma, on the last leg of his battle against brain cáncer. Upon retuming, Sonny is heartbroken to see the frail, deteriorating man who spent his entire life attempting to créate a better future for his children. Sonny must also come to grips with the wave of crime, poverty and drugs which has tumed his old neighborhood into a war zone. Sonny s sister, Rainy, who inherited the old house from her father, has found herself trapped in a relationship with a drug dealer and now n her mid-thirties still clings to her pipe dream of becoming the next Anita Baker. For Sonny, the death of Absalom and the disintegration of the family he tried so hard to protect, forces him to question whether his life or his father's had any significance: thought I was really happy with my job and my life and everything and then Dad gets sick and now I don't know what to think. He worked like a dog his entire life, and for what? And now he's dying and it's like nothing happened. The woridjust doses up around people when they leave. Especially black men. This is our father. Ifhe dies, who will know it? Who will care? Sonny s the modem equivalent to Ralph Ellison's anti-hero. And like the Invisible Man, Sonny finds himself on the modem underground railroad called education. His ride takes him to the world of white corporate Minneapolis where the cost of success could come at the expense of his roots. Unlike Ellison's antihero, Pate sends Sonny back to Philadelphia toface the death and destruction which awaits him there. And for Sonny, there is no safe haven in the underworld.